Weir Baffled By Coaches Relay Decision: ‘I can’t make any sense of it’ 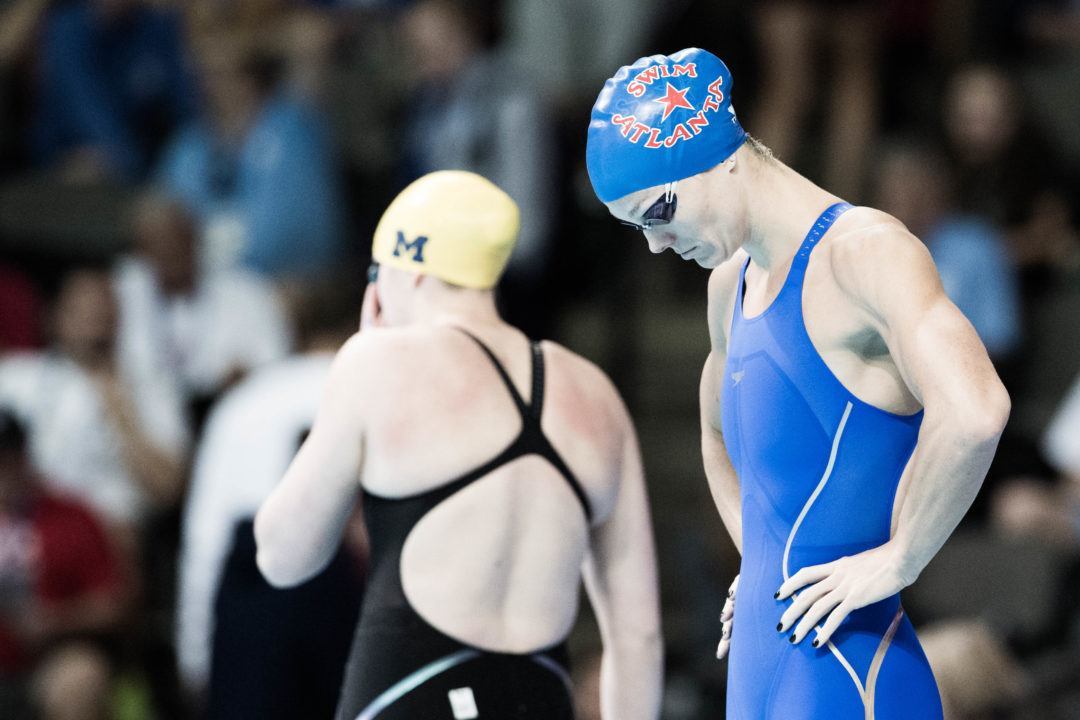 Amanda Weir was shocked with the decision made by the American coaches to leave her off the women's 400 free relay. Archive photo via Mike Lewis/Ola Vista Photography

All of these decisions had some logic behind them, and are justifiable for their own reasons. However, there was one decision that has many still puzzled.

30 year-old Amanda Weir had an amazing performance at U.S. Olympic Trials, posting her three fastest 100 frees since 2009, all consecutively faster, to finish 3rd in the final. With so many options for the Americans in the 4×100, you’d suspect that performance may even get her a bye into the final, but it didn’t.

Weir swam the prelim relay, leading off faster than her Trials swim in 53.60, the fastest lead-off split of the morning. She left that swim feeling confident she had done what was necessary to earn her spot on the final relay that night.

About 25 minutes later the news was broke to Weir that she wouldn’t be swimming in finals. She immediately was in tears.

“I was shocked,” Weir said. “I immediately started crying. I was so mad and upset because I really was shocked. I thought if I had gone 54 (seconds) flat or even 54 high, they may put Dana on (the relay), but not with my season best and not being faster than I did at Trials. I was emotional for sure, not angry or disrespectful. That’s not how I operate. … It took awhile to put the pieces together and I still don’t have that much information on (the coaches’) thought process. If you put it down on paper, I can’t make any sense of it.”

What troubled Weir maybe even more than being left off the relay was how it was handled by the American coaches. She wasn’t approached after the relay, wasn’t asked how she felt or if she thought she could go faster, the coaches just went and made the decision on their own and broke the news.

“It made me think there’s one of two things going on here,” Weir said. “One was after the prelims session and maybe Australia didn’t have as great of a race as we thought they were going to. Going into the meet, that was the biggest challenge and on paper we were going to be fighting just to get any medal. After Australia’s swim, maybe they got that taste of gold. If we have the swims of our life, maybe it can happen. I worry that the taste for gold clouded the decisions of the people in charge at the expense of the integrity of our Olympic Trials and why our sport is fair. And with the way everything happened was odd. Nobody came down to my warm-down pool. Normally a coach would come over to me and speak about my race. … None of that happened”.

“I never got any feedback from coaches. All eight of them went into a huddle, plus the national team director, and talked for 25 minutes. They never asked me how I felt, if I could go faster. Of course I would have said yes because it was the best-feeling swim I’ve had in 10 years. It makes me think it was already decided a long time ago the way it happened.”

Weir’s former Olympic teammate Natalie Coughlin, a 12-time Olympic medalist, was as confused as anyone when the news broke Weir wouldn’t be swimming the final.

“I was really, really surprised (Weir) wasn’t on the relay,” said Coughlin, “And this is in no way disparaging the people who were on the relay. The four girls who were on the night relay did a fantastic job and got a silver medal. Relays are always a really touchy subject because they are at the coaches’ discretion. Nothing in our swimming by-laws says that if you’re in this place at Trials you are on the night relay. There’s really nothing like that”.

“However, Amanda’s entire season has clearly showed she earned that spot. The prelims, the semifinals and the finals at Olympic Trials, her leadoff swim (in the Olympics) were consistently fast and should have got her that spot. … I was texting with her and just assumed she was on the night relay. There was no doubt in my mind. As someone who’s been there and knows the process, Amanda earned that spot and proved her worth. And she’s someone who’s been there numerous times and has that experience. She won her first (Olympic) medal in 2004 alongside me in Athens.”

The decision to put Katie Ledecky on the morning relay wasn’t a surprise, and she earned her spot in the final splitting 52.64 in the morning.

The puzzling decision was the addition of Dana Vollmer, who finished 6th at the Olympic Trials in the 100 free and finished behind Weir in all three rounds of the prelims, semis and final.

Adjusting for reaction times Weir’s swim in the heats out-split Vollmer’s final swim by a little over a tenth, but ultimately who swam in finals wouldn’t have mattered, as the Australians won gold by over a full second.

It was more about taking the spot away from someone who had clearly earned it, and the way it was allegedly handled by the coaches that was Weir’s issue.

Find the full article at the Gwinnett Daily Post here.

This actually pisses me off wtf david marsh

Amanda has a history of underperforming on relays. She is a bad teammate for going public during the competition too.

Agreed, read my comments below

Not sure this counts as public. She has not said anything on social media I do not think. Just answered questions after it came up. This is an issue that has cost America the gold in previous Olympics and needs to be addressed. Create some by-laws like Natalie was talking about.

you can’t do that- you need to make decisions based on the event that meet.

if the men/women’s 4×100 free’s situations were reversed- i.e. the men were heavy underdogs to an on point squad, and the women looked the most consistent and there wasn’t a clear cut favorite- I’d have gone with Ervin and Weir, respectively.

But the women needed the highest ceiling swims possible to possibly win gold. It didn’t work out. That’s the way it goes. But they put their best gold hope relay out there. They were solid for silver, regardless of who swam it.

There wasn’t a clear cut favorites?

What are you smoking?

The Aussie women were heavily favored to win gold, the rest were only fighting for minor medals.

re-read my post. i said if the situations were reversed, and then proceeded from there.

Agree on the last part… Not the time for this.

The relay discussion is a hot topic. I want to better understand the USA process and look at the past Olympic Games to gauge decision and trends.

Can someone find another story in the media where one of our swimmers spoke about not being in a relay? Gary Hall Jr in 2004 comes to mind for the 4 x 100 Free Relay being replaced for Phelps.
We know how vocal Hall was back in the day.

Is it a unwritten rule not to talk publicly about coaches relay decisions at the Olympics?

This and the Jack Conger issue… American coaches only putting the big names on relays to attract the most attention from the media/NBC. Disgraceful

I’ve seen this theory repeatedly and it’s proven FALSE by the fact that NBC golden girl Missy Franklin was not swimming in finals last night. The coaches removed the superstar because she’s struggling this meet. They made the hard decision to go with Dirado and she showed she was the right choice.

the only problem with that theory is that Franklin is swimming poorly across the board while Conger and Weir are swimming very well.

very well is relative. Lochte beat Conger in prelims, Weir was good for her, but not good enough- we didn’t need a 53.2-53.4, we needed a 52.6, and Vollmer was a better chance at that.

the idea that the coaches screwed up by dreaming of gold medals is so ridiculously absurd I can’t even begin to understand it.

OF COURSE they are making decisions to win gold. if they weren’t they should be sent home immediately.

Vollmer was never to go 52 in any ways – did she even get to the 52 in a past relay ? from my memories , she never got to the 52 mid or high in a rolling start . Poor decision i say

When did Vollmer ever go 52.6? or anywhere near that?

Could not agree more. Well said.

wrong- they put the fastest people on the relay. Using the morning splits minus reaction time, which is how it’s ALWAYS done so guys don’t feel compelled to jump early, Lochte beat Conger. Conger got pulled for Phelps, which anyone who wants to have that debate, well… I just can’t help you there. Phelps swims. Period.

Vollmer over Weir is a sketchier choice, but there’s not even a question in my mind about the decisions they made on the men’s side.

Dana dropped a lot in fly that day from Trials so probably rationalized that she would drop in free too. These decisions are tough for coaches….I get that….but someone (a coach or Frank Busch) should have communicated what was happening and why.

Totally correct – there is something missing about communicating their decisions motivations .