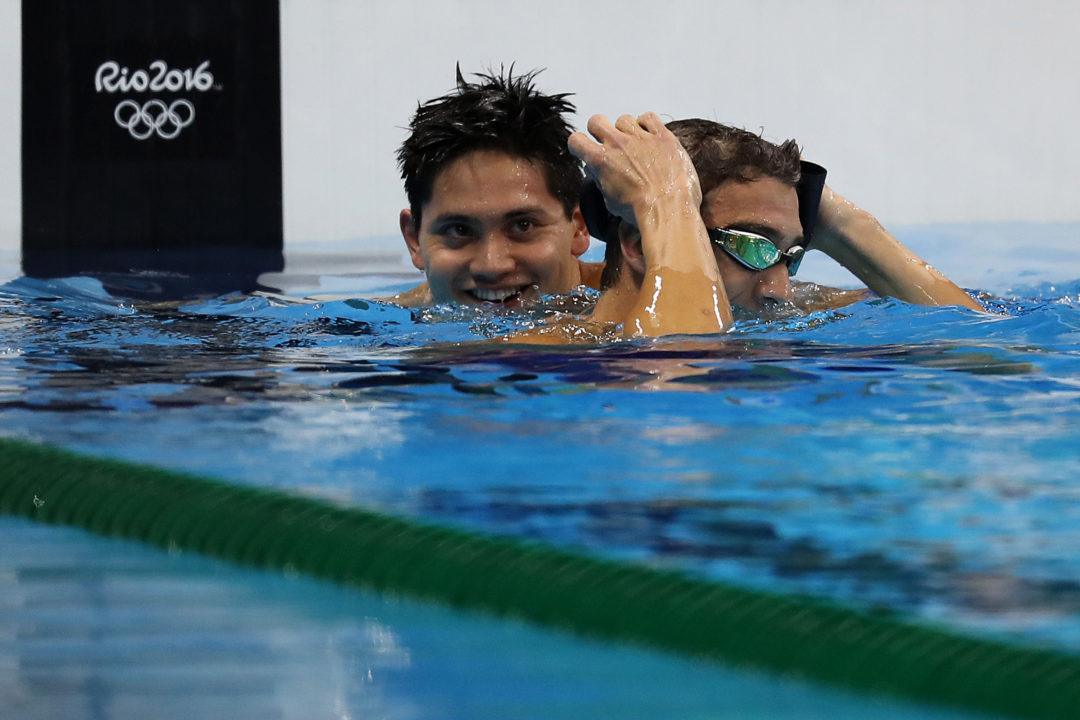 If for a class at the University of Texas this Fall, Joseph Schooling had been assigned to write an essay, “What I Did on My Summer Vacation?,” the letter might read something like this. Current photo via Simone Castrovillari

“What I Did on My Summer Vacation”

This summer I went to Rio de Janeiro in Brazil. It’s a big country in South America. Lots of beaches and volleyball.

There is where the Summer Olympics took place. Being a swimmer for my home country, Singapore, I qualified for the 100 meter butterfly event.

There were phenomenal swimmers in that race. They included Michael Phelps, the greatest swimmer who has ever lived and my boyhood idol; and Chad le Clos, who beat Michael in the 200 meter butterfly in the 2012 London Olympics. That was a stunner. Michael doesn’t usually lose that race.

This became an international TV and YouTube virus that went sick. The whole world saw how le Clos played mind games with Michael. Michael got a really angry look on his face. It looked like the two might start fighting right there. If they had, I wonder if it would have made them swim slower. Fighting takes energy.

Le Clos shouldn’t have shadowboxed. His pre-race antics proved to be fruitless. Michael smoked him in the Gold Medal race. People said he made himself look foolish.

Another big shot swimmer in the 100 meter butterfly final was Laszlo Cseh. If a Westerner, you may not have heard of him. But he’s one of the greatest swimmers of our time. Throughout his career Phelps has overshadowed Las. If not for Phelps, Cseh would probably have about four or five more Olympic Gold Medals and might even be a household name in kitchens of swimming families around America.

Anyway, Michael, Chad and Laszlo were in my heat and were the ones to beat.

You could not put together a butterfly race with more butterfly stars in it except, maybe, if the heat also featured Ian Crocker and/or Mark Spitz. But those two guys competed in the Olympics many years ago. This essay is about this summer. Let’s stick to the assignment.

Then there was me, Joseph Schooling. Not many people knew me before the race and maybe still don’t. There were four other guys in that final heat. But they are not central characters in this essay so let’s leave them out of this.

So the race for Gold was supposed to be between Michael, Chad and Laszlo. Rowdy Gaines, a swimming luminary, thought so.

Turns out the three favorites did race each other very closely. But I swam a different race way out in front of them. The Gold was mine. They were in a panic to try to get Silver. This wasn’t my concern. Panic was not me. The three of them tied for the Silver but that’s a footnote for swimming historians to annotate.

Standing on the top pedestal as they played Singapore’s national anthem, I felt proud and a little distracted because three guys were standing on the Silver Medal stand.

In my mind as I stood on the pedestal, I shadowboxed Michael and Chad and Laszo. Right then I envisioned this day back here at the University of Texas when I would read this essay to my class.

Not to blow my Texas Longhorn, but what I did on my summer vacation was swim a faster 100 meter butterfly than any man alive on that day, on the world’s biggest swimming stage.

This is written by Charles Hartley as an opinion piece.

I agree with you plus now he has so much opening speed it’s silly. His 50m in the world cup recently was a 21.1!! He’s probably swimming it in moscow and I’m excited to see what he can go.

One can be a right plonker and a good, even great swimmer or athlete.

I’ve warmed up to LeClos as well. Didn’t like the cockiness towards the GOAT, but I think that was all for show.

It should also be included that Schooling swam faster than Phelps, or anyone for that matter, has ever gone in a textile suit (50.39 to Phelps’ 50.45) and that’s something to brag about.

Yep. But bragging is for losers.

It ain’t trickin if you got it

Fastest 100 fly ever? Or on that day? Slightly confused.

Anyway, I wonder which is the true World Record:

49.82 Phelps LZR bodysuit. This suit is not near to the supersuits of the 2009 era, but still pretty enhancing.

Upvote for the GOAT

Downvote for the 1st Singapore gold medalist EVER.

“Not to blow my Texas Longhorn” God I love you Charles

This honestly sounds like an essay an 8 year old wrote… it’s funny but not funny at the same time.

“There is where”…….I thought that you were an English major.

Yes, Phelps was tired, but that doesn’t negate the fact that Schooling beat him. Not saying Schooling is a better swimmer than Phelps, obviously, but on that day Schooling swam a (much) faster 100 meter butterfly than Phelps did. And also he went .06 faster than Phelps’ textile best.

Here is my make believe version of what Joseph was thinking during 100 fly finals:

“I like that Eddie is here to watch me, but I kind of wish he was not here so that I could breathe every stroke and look back at Le (not so) Clos(e) on every stroke. But, again, he is so behind that I might twist my neck badly. Oh, well, I will just go win this. Yee Haw!!!”