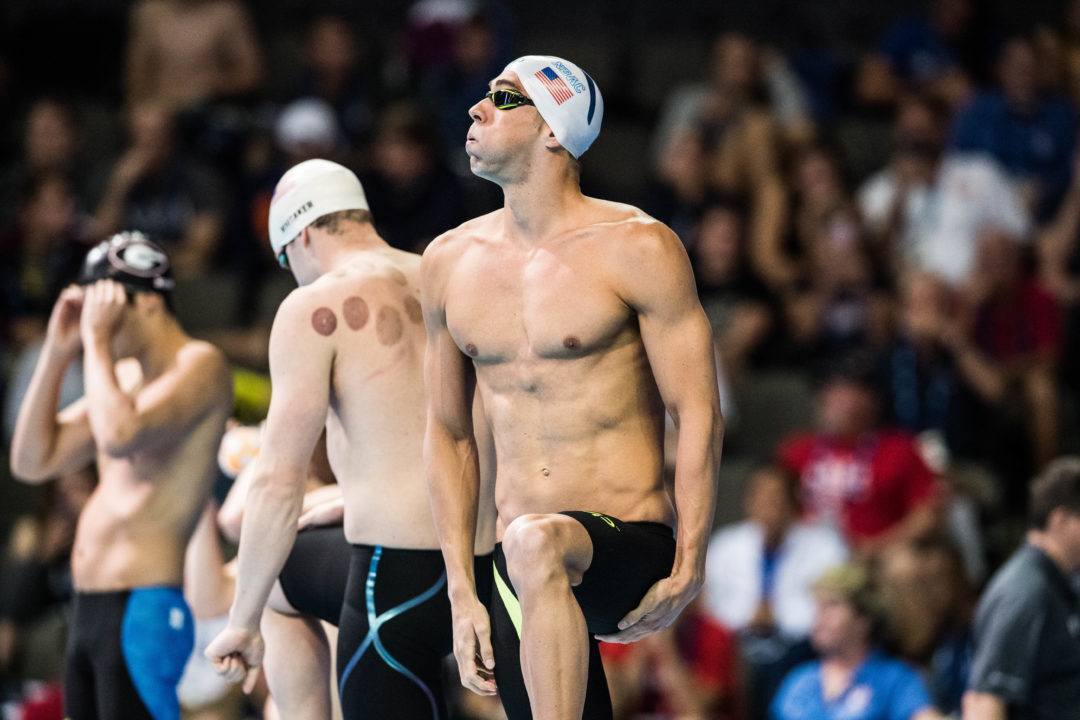 The relay lineups for tonight’s 800 free relay for men have been released, and what has been speculated all day has happened, Michael Phelps has been named to the American lineup for the final of the 800 free relay. Phelps takes the spot of Jack Conger, who actually had the fastest split on the prelim relay of 1:45.73. Ryan Lochte, who split 1:45.80 in the heats, will also swim the final.

Phelps and Lochte will swim together in the 800 free relay final for the fourth consecutive Olympics, winning gold on all three previous occasions in 2004, 2008 and 2012. The two of them will join Conor Dwyer and Townley Haas on the relay.

Other than the Americans addition of Phelps, the biggest surprise here is the absence of Cameron McEvoy on the Australian team. After tying for the win at Aussie Trials in the 200 free, McEvoy dropped the individual event, but still said he was focusing on the 800 free relay.

The Belgians have moved out Emmanuel Vanluchene for Pieter Timmers, the Russians have replaced Viacheslav Andrusenko for Danila Izotov, and the top seeded Brits have removed Robbie Renwick in favor of James Guy.

All three additions were expected, but it is a bit of a surprise that Vanluchene came out of the Belgian lineup and not Louis Croenen, who has the 200 fly final tonight. Both swam very similar legs this morning.

The Germans and Dutch have also made one move each, as Christoph Fildebrandt and Sebastiaan Verschuren come in and Jacob Heidtmann and Ben Schwietert move out.

Japan is the only team that stands pat with their lineup from the morning, led by Kosuke Hagino.

Before y’all jump to favoritism, I’m sure Conger had a say in this. They wouldn’t do it without his approval.

LOL, there is absolutely zero chance Jack would willingly sit out. That kid wants to race

He gets his medal either way. That might have persuaded him a bit.

Not at all. He doesn’t get the experience of being on the medal stand while the National Anthem plays, that is a huge part of the Olympic medaling experience.

The problem is, he always comes up short. Great talent, but how he missed making the team in the 200 fly, how he’s never won an NCAAs in any close race has got to be at the back of coaches’ minds. He’s usually money on relays, but he didn’t do himself any favors by going the same time with a flying start that he flat started at Trials.

Oh, Harambe… you were too wise for this world.

You really think the coaches asked his “approval”? Even if they did say “hey Jack, what do you think about us putting Ryan on the relay instead of you?” what is he suppose to say? No one says “yeah sure leave me off and put on the guy I beat who already has had this experience multiple times I’ve waited my whole life to have” and means it!

*putting Phelps on instead of you.

Lochte earned his spot. So did Jack.

Yeah, thinking about it I don’t really agree with myself here, it’s just a decision he’ll have to deal with I guess.

He had 0 input and was given 0 explanation. I guess having the fastest morning split and actually qualifying for the race and for being .1 from being in the race individually means….nothing? Way to go USA Swimming.

How do you know these things? Were you there?

I’m sure he had zero say in the matter except “ok” when told he wasn’t swimming. Not sure why everyone is upset with Phelps, he was ALWAYS on the relay, it was btwn Conger and Lochte, who I felt shut it down the last 15 meters in his prelim swim this morning and still went 1:45 mid. You can rest assured the coaching staff knows what they are doing.

I really doubt it. Knowing that young man – he did not agree to this, and he probably feels like he earned his swim tonight – both this morning and in Omaha. He was told this is how it will be and had no choice. C’est la vie. I don’t agree with it, but I’m not the coach. Good luck fellas.

What??? Why would he do that when he performed better on the qualifying race and would get a chance to win that medal based on his swimming and showcase his ability alongside Phelps and Lochte? No, pretty sure that did not happen.

Really sucks for Conger but I think in the big picture, this is better for the sport.

Why is everybody having a cow about MP swimming on the relay? Shouldn’t they be more upset Lochte got the nod over Conger if Conger outsplit him this morning?

Factor in the reaction times, and Lochte was faster.

you can’t say that, getting a quality reaction time is part of the race

Uh, actually I just did.

glad you did, it got me excited

Although, devil’s advocate, in prelims, the focus is more on safe exchanges. Factoring out prelims relays exchanges (something coaches do fairly often, in my experience) serves to not punish a swimmer who plays it safe with an exchange in prelims and doesn’t incentive pushing relay starts to dangerous speeds in the morning in order to win a finals spot.

Or pushing a relay start in a seven minute long race that would still final if each swimmer stood on the block for an extra two seconds.

Yes, but everyone wants to see the phelps-lochte duo back at it again its for money and publicity

And the silver medal

Hard to argue against your point

Was really hoping to see Conger go big on this relay

Really? What is disgusting in giving the two best swimmers in history(Lochte and Phelps) spots on a relay.

Thank god I trust relay decisions from USA Olympic Coaches and not the Swim Swam commentators. If we did that we probably would of gotten the silver in the 4 x 100……

I trust proven World and Olympic Champions in the 200 free…so get over it.

That they had a trials and the top 4 can win the race.
Sticking Phelps last is for bowman and nbc.

Get over it? I’m not American I hope USA gets beat, just defeats the object of Olympic trials and destroys other swimmer hard work. Conger would get the job done.

Should we bring back all Olympic champs from 2008, why don’t you get Couglin back in for medley relay.

I probably speak for majority of us here….thank f’in god you aren’t American.

Just speak for yourself

It’s not particularly surprising re Vanluchene, as I pointed out on the ‘speculation’ thread

Iain – right, I was just thinking the 200 fly for Croenen would tip the scales in Vanluchene’s favor for the relay since he’d be fresh.

Fair enough I guess – Croenen has been consistently quicker though

Shame. Jack seems to have pretty rough luck – always the bridesmaid, never the bride. Hope he’ll get his turn next time around.