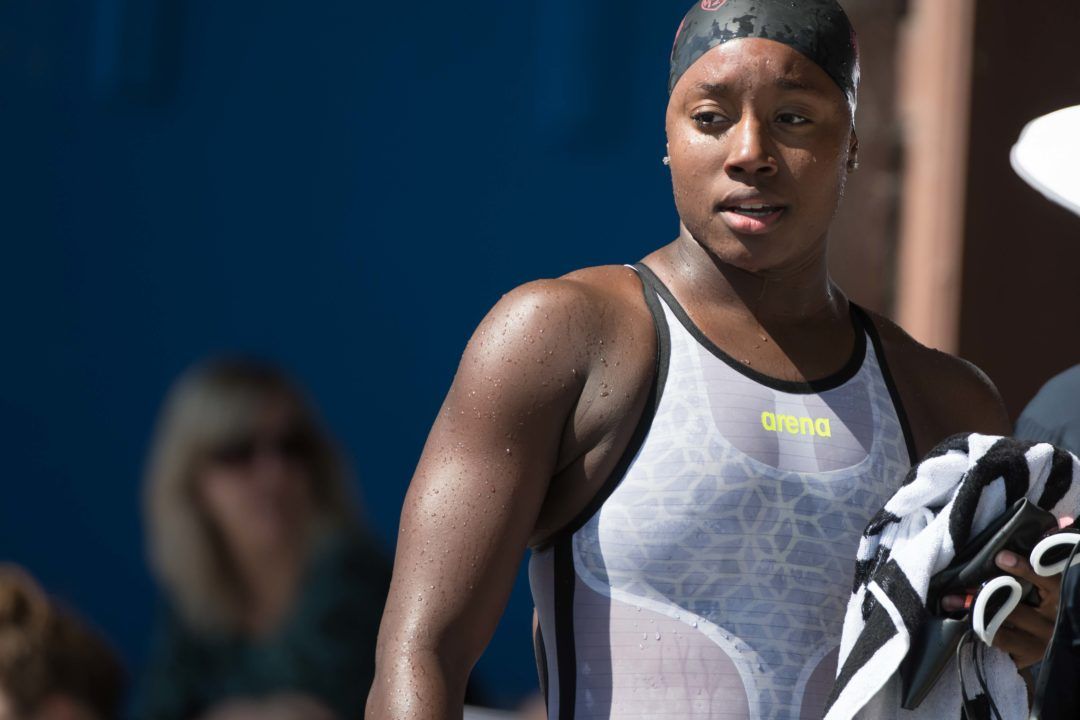 Simone Manuel is the clear #1 in the women's 50 free, but behind her the remaining spots are wide open. Archive photo via Mike Lewis/Ola Vista Photography

Much like the situation in the men’s 50 free, the American women have one superstar, competitive with the best in the world, and then a large group jockeying for position behind them in the fastest race in swimming.

After an 8th place finish in the final at the 2015 World Championships, Simone Manuel has exploded onto the scene as one of the top female sprinters in the world. Carrying over the momentum from her historic 100m freestyle gold medal at the Rio Olympics, she won silver in the 50 in a time of 24.09, nearly four tenths faster than she was the previous summer in Kazan.

After another epic 100 free win at the 2017 World Championships, the now 21-year-old followed up with a bronze in the 50, becoming the first American to ever crack the 24-second barrier in 23.97. The 14-time NCAA champion has already been 24.59 this season, her fastest ever outside of a major international or national competition, and should easily win the event at U.S. Nationals.

While Michael Andrew and Nathan Adrian are clearly the two horses in the race for the #2 spot in the men’s race (behind Caeleb Dressel), the women’s is much more wide open.

Last year it was Abbey Weitzeil, the 2016 Olympic Trials winner, who eked out a spot on the World

Championship team with a runner-up finish to Manuel in 24.74 after not even making the A-final of the 100 free. She would end up 15th in Budapest, and while that came at the end of a difficult year where she was transitioning to college life, she wasn’t any f

The woman who has emerged as the leading candidate for the #2 spot is 26-year-old Margo Geer, who’s had a renaissance season of sorts after looking like she was done after the 2016 Olympic Trials.

She placed a disappointing 16th in Omaha, over a half second off her personal best, and raced sparsely in 2017, including not attending the World Championship Trials. She wound up 5th at the U.S. Open in August, finishing the season as the 27th fastest American at 25.58, but has really exploded in 2018.

Only breaking 25 seconds once in her career prior to this year (24.95 in 2014), Geer has now been under nine times in 2018, with her fastest swim of 24.72 sitting 2nd among Americans and 16th in the world for the year. Along with the fact she’s been consistently fast all year, only Manuel has been faster than Geer’s 24.72 since the beginning of the 2016-17 season, which bodes well for her chances of qualifying for the Pan Pacs this summer and the World Championships next year.

Along with Manuel and Geer, there are two other Americans under 25 seconds this season: Madison Kennedy and Mallory Comerford.

The 30-year-old Kennedy has been on the cusp of breaking onto a major international team for many years, but has always fallen just short. She was 5th at the 2012 Olympic Trials, 3rd in 2016, and was also two one-hundredths shy of making the Pan Pacs four years ago. Already faster this year (24.88) than she was at World Trials last year (24.95), she’ll be a major factor once again.

Comerford is known best for her ability across the 100 and 200 metre distances, but showed she has the raw speed to be competitive in this event last summer when she finished 6th at World Trials (with a PB 24.88 in prelims). She’s already been 24.94 this year, which was done in the first round of the three-round shootout in Mesa (where she won with subsequent swims of 25.00 and 25.10). With that consistency, and being over three tenths faster than her fastest in-season swim in 2017 (25.28), she could very well be setting up for a 24-mid in late July.

While Comerford and Kennedy were 6th and 7th last year in Indianapolis, the 3rd, 4th and 5th place finishers were all within a tenth of Weitzeil’s 24.74 and World’s qualification.

Lia Neal and Kelsi Dahlia both swam personal bests of 24.77 and 24.79, and Olivia Smoliga was 24.84 after going 24.70 the year prior in Omaha. All three will be in contention once again, but with Dahlia putting more focus on the 200 fly and Smoliga expandin

g her range out into the 200 back, they may lose a bit of their edge.

Texas Longhorn commit Grace Ariola was the 8th swimmer in that final, and after gaining experience there, went on to win silver at the World Junior Championships in a lifetime best 24.82. That put her 5th among U.S. swimmers for the season, and if she can take a small step forward this year, could surprise the more established names.

Two other names to keep an eye on: Erika Brown and Katie McLaughlin.

Brown, who had a breakout collegiate season with Tennessee, didn’t even race long course at all last year, and came into 2018 with a best of 26.01 from 2015. She’s already been faster than that on three occasions, including a 25.21 in June which ranks her 9th in the country. Taking into account she was the runner-up to Manuel at NCAAs in 21.51, no one really knows what her ceiling is and her cracking the 25-second barrier in Irvine looks to be in the cards.

McLaughlin, traditionally a 100/200 butterflier who dabbled in the same distances in freestyle, has taken up the 50 much more this year, and has stated she really enjoys the sprints. It’s worked so far, having been her fastest ever at 25.19, and like Brown, sub-25 seems to be only a matter of time.

Others who could make their way into the A-final with a big swim: Caroline Baldwin, Anika Apostalon and 15-year-old rising star Gretchen Walsh.

Honestly wouldn’t be surprised to see Geer win the 50. Simone tends to underperform at Trials meets (and then kills it at the real show). And Margo has looked fantastic, going best times presumably untested.

Under performing would involve not making the team. Simone just gets the job done when it counts.

All I’m saying is I think she’s beatable (at Trials anyway).

Geer’s renaissance, comeback, or whatever you want to call it, has been quite unusual.

really hoping madison kennedy breaks through. i root for her so hard

The Darkhorse Comment- Anya Goeders former team, Mako swim club dissolved October 2017. The unfortunate dissolution came after Mako was evicted from the Valparaiso University Pool. Mako then secured a new facility but was subsequently evicted from that facility. Shortly thereafter, the Mako coaches quit and moved out of state to work at new clubs. Then in November 2017 she had to switch to a new club. The level of coaching and training has substantially changed which has helped lead to slower times over the past many months. From what I’m told, she will not be swimming at 2018 Nationals.

@7777 best of luck to Anya that is a lot to deal with. Hopefully her new team will lift her up.

Walsh will be good.