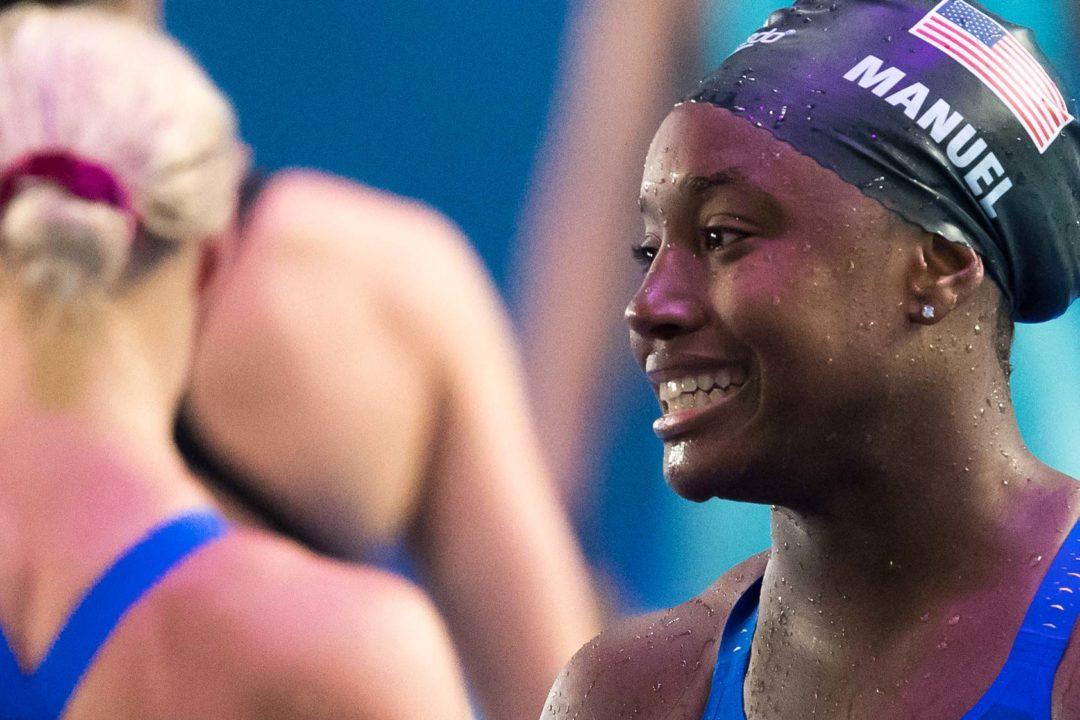 Manuel, who won the 100 free earlier in the meet, became the first American woman to break the 24-second barrier when she touched in 23.97 to take bronze tonight. Current photo via Mike Lewis/Ola Vista Photography

American sprint star Simone Manuel earned another piece of hardware on the final night of competition at the 2017 FINA World Championships. Manuel, who won the 100 free earlier in the meet, became the first American woman to break the 24-second barrier when she touched in 23.97 to take bronze tonight. Winning the race was World Record holder Sarah Sjostrom (23.69) ahead of the Netherlands’ Ranomi Kromowidjojo (23.85), who put up a personal best for the silver.

With her performance tonight, Manuel set a new American Record and Continental Record. She erased the former mark of 24.07, which was set by sprint legend Dara Torres back in 2009.

Of all the Rio gold medalists, she might have had the best overall meet in terms of matching best performances across multiple events. King was good, too, but disappointed in the 200 breast final and didn’t have a faster-than-flat-start relay split.

Of all the Rio gold medalists, the top two showing improvement over multiple events would be Caleb Dressel and Sarah Sjostrom listed in alphabetical order. Manuel improved by 0.5% in the 50 free and 0.8% in the 100 free compared to Rio. King set a WR in the 50 breast which was on the Olympic schedule. She improved her 100 breast by 1.2% setting a WR and it is hard to see how she disappointed in the 200 breast when she improved her time by 1.7% over Rio.

What about Sarah- would say she matched her best performances too. Both of them still doing great a year after the Olympics!

What about Sarah? Is this page dedicated to Sarah’s win? No. Really? ?

I was wondering the same thing. Who is this page about??

This young lady will be an absolute terror when she hits her prime. She already knows how to get mentally ready and strategize in a race when she not the fastest. Once she reaches peak speed its over.

She’s smashed all the barriers for American women’s sprinting. First she broke 53 in the 100 last summer and now she’s under 24 in the 50. Amazing!

She will likely break 52 in the 100 one day aswell. Hats off to her, she’s gone from very promising to a star.

Beautiful race and beautiful photo above.

Glad the 2009 records are starting to go away! Congrats to Simone!!