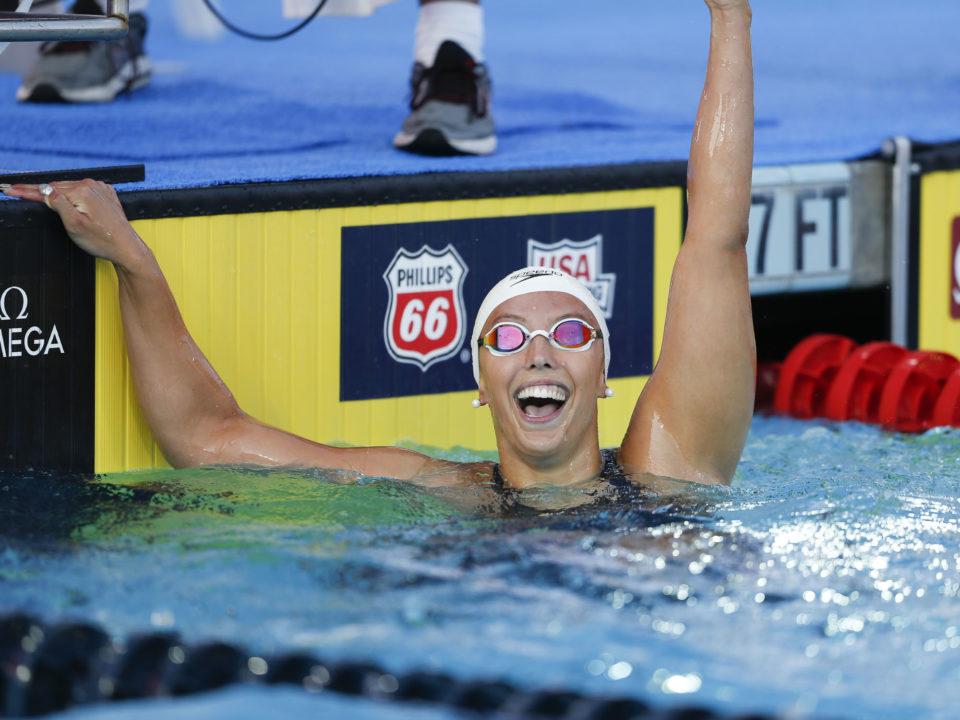 After setting the 100 back World Record last night, Kathleen Baker is slated to take on the 200 IM today against Olympic medalist Melanie Margalis. Current photo via Tim Binning/TheSwimPictures.com

We’re on to the final prelims session of the 1008 U.S. Nationals in Irvine, California. Today, swimmers will compete for Pan Pacs spots in the 200 IM, 50 free, women’s 1500 free, and men’s 800 free. The 200 IM and 50 free are the only heats to be swum in the morning, while the distance races are timed finals. The distance heats begin this afternoon and the fastest heat will compete in finals.

The 200 IM will feature Olympic medalist Melanie Margalis, the heavy favorite, on the women’s side, along with new 100 back World Record holder Kathleen Baker, the 2017 NCAA champ in the 200 IM. After falling ill with mono and missing the 200 fly final on day 1, Ella Eastin is back to take another shot at making the Pan Pacs team in that race. In the 50 free, star sprinter Simone Manuel, the American Record holder, headlines this field. She’ll go up against fellow Olympic sprinter Abbey Weitzeil and 2015 Worlds sprinter Margo Geer.

Olympic medalist Melanie Margalis is still the clear favorite here, topping prelims by over a second in 2:10.13.It looks like it’ll be a fight for 2nd behind Margalis, but after her 100 back World Record last night, Kathleen Baker may be able to put together a big swim and challenge tonight. Baker was the 2017 NCAA champ in the 200 IM. She was just a few tenths off her lifetime best 2:11.58 from the Mare Nostrum this season.

The 2018 NCAA champ and American Record holder, Ella Eastin, has been sick with mono. Eastin, who wasn’t sure if she’d be able to swim at all this meet, is in the running after taking 5th in 2:12.01. She missed the 200 fly final on day 1, and wound up scratching the 400 IM after that. This is her last shot at making Pan Pacs and in turn 2019 Worlds. There are a couple of new challengers to watch out for with Alex Walsh (2:11.83) and Evie Pfeifer (2:11.66) both dipping under 2:12 for the first time. Walsh is now tied as the 6th fastest American ever in the 15-16 age group. Pfeifer took a full second off her best to qualify 2nd.

World champion Chase Kalisz leads by a wide margin as expected, heading into finals as the top seed in 1:57.12. Kalisz dominated the 400 IM earlier in the meet to qualify for pan Pacs. Abrahm DeVine (1:58.72), who made a huge drop in this event last summer to qualify for Worlds alongside Kalisz, held off Olympic 400 IMer Jay Litherland (1:58.97) to win his heat. DeVine is the 5th fastest American man ever in this race, while Kalisz is #4.

Andrew Seliskar has been on a roll at this meet, qualifying for Pan Pacs as he won the 200 free earlier in the meet. Seliskar has had a big breakthrough here, swimming best times or his fastest times in several years in his races. This morning, he put up a 1:59.24 200 IM to top Olympic teammate Josh Prenot (1:59.55) in their heat. That was Seliskar’s first best time in the event since 2013. Prenot is looking for redemption here after missing out on the Worlds team in this race by a few tenths in 2017. He’s the 6th fastest American ever and looks primed to challenge after swimming the 2nd fastest American 200 breast ever earlier in the meet.

Both Georgia and Texas got 2 in the top 8. The Bulldogs have Olympians Litherland and Gunnar Bentz, while the Longhorns will cheer on Sam Stewart and John Shebat. Shebat clipped his best by a tenth to make it in, while Stewart made a big 2 second drop. He’s been having some great swims here, making a similar massive drop to final in the 400 IM earlier in the meet.

16-year-old Gianluca Urlando was chasing another NAG Record set by Seliskar back in 2013. Urlando, who tied for 3rd with Olympian Jack Conger in the 200 fly, touched in 2:00.62, dropping 3 seconds from his nest. He’s now the 3rd fastest American 15-16 swimmer ever behind Seliskar and Michael Andrew. That moved him one spot ahead of the legendary Michael Phelps.

A few heats later, 16-year-old Carson Foster stepped up and broke that record. He was just out of the final at 9th in 1:59.71, but clipped the NAG Record by a tenth and dropped a second from his best. Foster and Urlando will swim next to each other in tonight’s B final, barring any scratches, and can race for that record head-to-head.

American Record holder Simone Manuel, who swam the 2nd fastest American 100 free ever at the beginning of the meet, led the way in 24.61. Manuel is the only American to have ever broken 24 seconds as she broke the mark at 2017 Worlds. Teammate and fellow Olympian Lia Neal will be in the final with her with a 25.09 for 4th in prelims. Indiana postgrad Margo Geer, who has been making a comeback since a post-2016 break, has already been putting up best times this year. She was just hundredths off her best this morning in 24.77. and has a good shot at placing in the top 2 here, but Manuel is the definite favorite for the final.

15-year-old Gretchen Walsh, who stunned the crown with a big swim in the 100 free earlier in the meet, qualified 7th here in 25.13. That was a best by 3 tenths after she put up a 25.46 at the Mel Zajac Invitational earlier this summer. She’ll be joined by fellow junior sprint star Grace Ariola (25.10) in the final, who tied with butterfly champ Kelsi Dahlia (25.10) for 5th seed.

Coming into this meet, Michael Andrew had already gone a best time in this race 3 times this year throughout the Pro Swim Series. He did it again this morning in a quick 21.64, which ties him for #6 all time among Americans and drops 5 hundredths off his time. Andrew has won 2 of the 3 stroke 50s thus far, topping American Record holder Caeleb Dressel in the 50 fly and breaking Olympic champion Adam Peaty’s U.S. Open Record in the 50 breast. He could take another win and his 4th title of the meet tonight if he’s able to hold off Dressel and Olympic sprinter Nathan Adrian. Dressel was 2nd this morning and the only other man to break 22 in 21.89.

Adrian, who held the American Record in this race prior to Rio, tied for 3rd with 2017 Worlds team member Zach Apple in 22.10. Both are capable of breaking 22 tonight, with Apple’s best being a 22.00. A 3rd member oft he 2017 Worlds squad, Michael Chadwick, is the 7th qualifier for finals in 22.30. Chadwick has broken 22 before with a best of 21.99. Also closing in on the 22 barrier this morning was Cal’s Michael Jensen, who shaved 3 tenths off his best in 22.03 to finish behind Dressel in the final heat.

Olympic gold medalist Ryan Held just missed the final in 22.47, meaning he won’t have a chance to earn a spot on the Pan Pacs team this summer since he didn’t qualify in his earlier events. Same goes for Tate Jackson (22.49), who swam the 2nd fastest 100 free of the finals session but did so from the B final. They’ll be joined by 100 free champ Blake Pieroni (22.50) and Harvard star Dean Farris (22.62) in the B final. Farris has had a breakthrough here and has officially gone a best time in every event he’s swum at this meet after dropping a tenth this morning.

A swimoff at the end of the session will take place between World Juniors medalist Reece Whitley and short course American Record holder Ian Finnerty for a possible WUGs spot. Last night, they tied for 10th in 1:00.93.

Finnerty, who became the 4th fastest American 50 breaststroker ever at this meet, had the early speed, turning in 27.6 to Whitley’s 28.2. Whitley started to come back on him down the stretch, and they were neck-and-neck at the finish. Finnerty was able to hold him off, though, winning by 2 tenths in 1:00.28.

Really excited to see what Seliskar can do in a 200IM today.

But… Pan Pacs is right around the corner!

Yeah. Hopefully we can watch them live this time, because In 2014 there was no livestream for finals.

exactly – lets hope that the Japanese make it happen ….

It is live on the Olympic channel at 230 AM here!

Oh yeah – thats what i love with Nationals ….we know that Pan pacs is just coming by ….

Pulling for Eastin in the IM!

I think all of us are.

Swimmer of the meet? Regan Smith, Baker, Ledecky, MA, Murphy. All in contention.

Gotta be Baker. A WR should trump all.

A World Record trumps all.

disagree heavily, wouldnt rank her in the top 3 even

Eh…if Flickinger went 2:01.9 that wouldn’t be a WR but would be swim of the meet.

I would think MA if he wins the 50 free. That’s 4 titles and a U.S. Open Record. Baker’s World Record was amazing. So was Ryan’s American Record, but MA will have at least one more win than Ryan is he wins the 50, and Ledecky has at least 1 more win than Baker if she doesn’t win this 200 IM.

(edit: this is not to say who I think should win. Just that the thought process may also be geared towards number of wins).

This is who I think should win, but MA will probably get it based on number of events.

I’m still in shock that both Miller and Cordes, who has been a staple of the National team for several years failed to qualify. They got a big reality check yesterday. Hopefully this motivates them towards the Olympic trials. Also, what will miller vlog about for the next couple of years? Curious to see.

Oh, I didn’t know that, thanks for the info.

This is correct. Miller, unless he’s still taking college courses, will probably go to Pan Ams.

There is a lower age on WUGs these days so WUGs is out for Cody, Fink

I give her props for participating in a message board that isn’t her native language.

Seems like this selection procedure is a scare tactic to prevent elite swimmers from relaxing in the middle of the quad. They seem to have gone easy regardless, which may not be the worst strategy for a long career