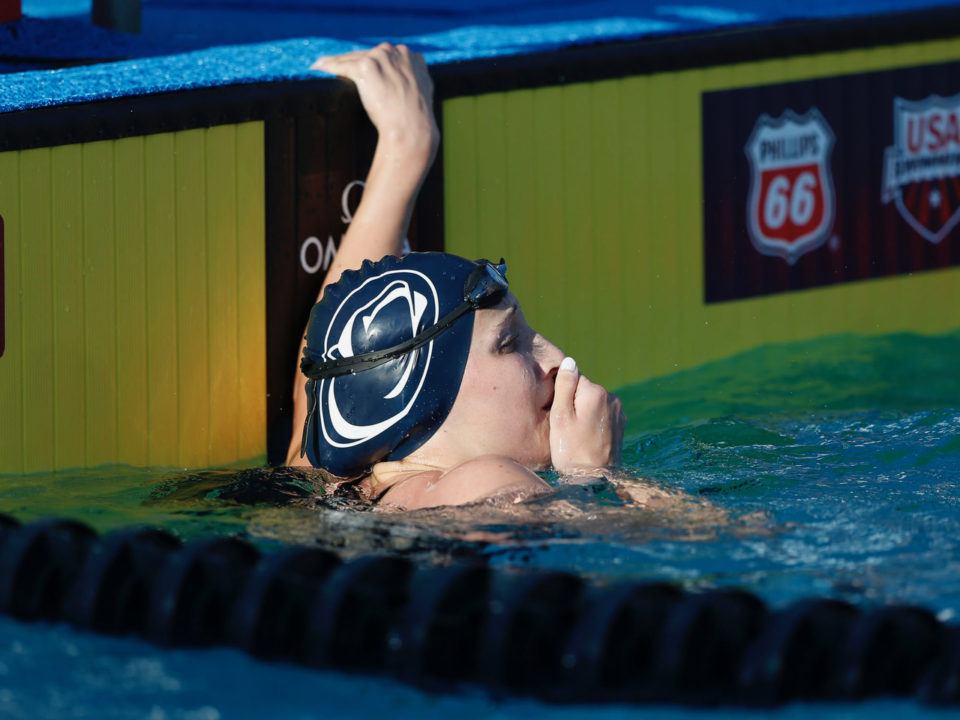 Doubles are extremely scarce three day into U.S. Nationals, suggesting that 3rd-place finishers might be in tough shape to make the Pan Pacs squad. Current photo via Tim Binning/TheSwimPictures.com

Doubles are extremely scarce three day into U.S. Nationals, suggesting that 3rd-place finishers might be in tough shape to make the Pan Pacs squad.

The big roster news is that two national team mainstays have finally punched their likely tickets to Pan Pacs and 2019 Worlds. Caeleb Dressel stopped his slide, winning the 100 fly to lock in a Pan Pacs spot, while Jack Conger was second. Based on modified world rank, Conger is the second swimmer on the bubble behind only Zach Harting.

On the women’s side, Kelsi Dahlia got into Pan Pacs with a 100 fly win and Ally McHugh had a breakthrough 400 IM to join the squad. Katie Ledecky remains the only woman with two priority 1 qualifying swims.

Tomorrow should offer lots of opportunities for priority 1 doubles, though. Ledecky could add another in the 400 free, as could Townley Haas. Ryan Murphy is favored to do so in the 100 back, and either Kathleen Baker or Regan Smith could do it in the women’s event.

In order to start selecting more swimmers to the team, sufficient doubles must be met to make roster space. Here’s how many doubles are needed to completely invite each priority for each international meet:

So far, here is our doubles tally:

Bear in mind that these rosters are in flux as the meet moves on. We’ll update daily, but be patient as we work through the intricacies of the criteria.

What are the requirements for WUGS? Do you just have to be enrolled in college during the 2018/2019 school year even thought you might have exhausted your NCAA eligibility? Or do you have to have competed for your university during the 2018-2019 year?

World University Games has nothing to do with the NCAA – it’s about college enrollment, rather than NCAA eligibility. The basic requirement is to be enrolled in a University by the start of 2019 WUGs or to have just finished a program in the spring of 2019. There’s also an age limit: 17-23 as of the meet start