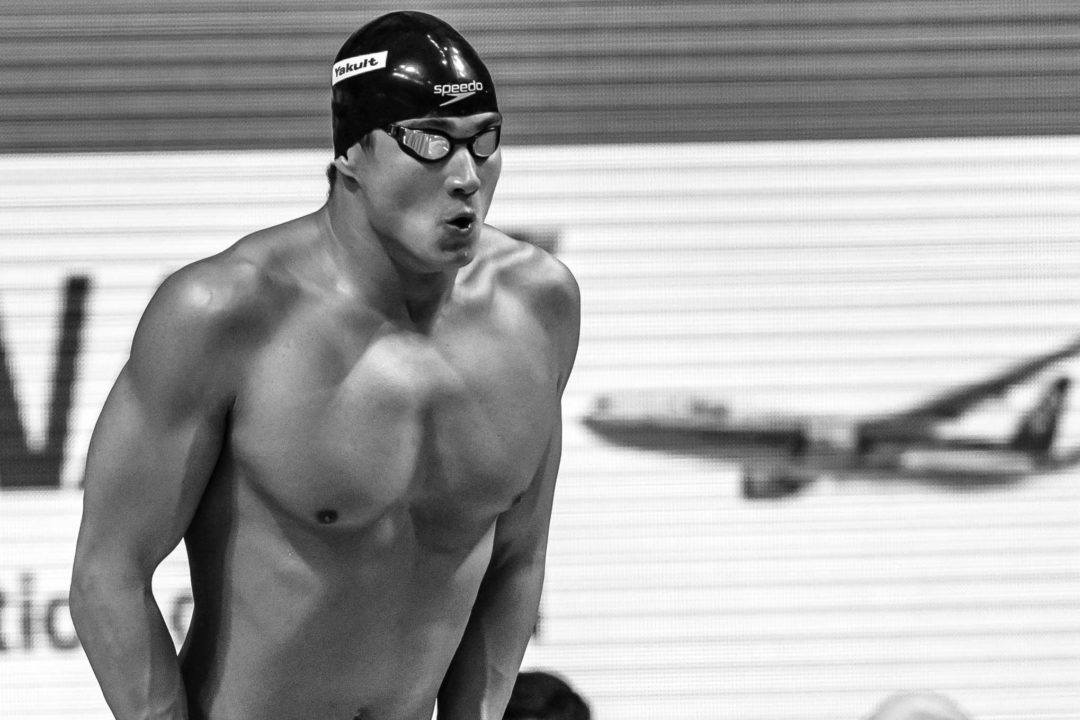 Nathan Adrian will be going for his first individual world title in the men's 100 free final. Current photo via Mike Lewis/Ola Vista Photography

Five finals and four semi-final events will be on tap from Thursday’s finals session in Budapest, as the 5th of 8 days closes out.

Leading off will be the men’s 200 IM, where top seed Chase Kalisz aims to continue the U.S. dominance. An American has won this event at seven consecutive World Championships, and Kalisz’s 1:55.88 semi-final indicates he can make it eight.

He’ll have challengers all over the pool though, most notably with Kosuke Hagino by his side in lane 5, Philip Heintz out in lane 7 and Wang Shun in lane 1. Lane 3’s Max Litchfield has also looked strong so far with a British record in the heats and just 0.04 off it in the semis. If he has a bit more in the tank, he’ll be a surprise medalist.

The stacked women’s 100 free lineup will start off with Denmark’s Pernille Blume in lane 4 in semi-final 1 after a Danish record of 53.13 in the prelims. She’ll be flanked by 2016 and 2012 Olympic gold medalists Penny Oleksiak and Ranomi Kromowidjojo, and the defending champion Bronte Campbell will also be there in lane 6.

The second semi will have top seed and world record holder Sarah Sjostrom in lane 4, Americans Simone Manuel and Mallory Comerford in lanes 5 and 3, along with Federica Pellegrini, Emma McKeon and Michelle Coleman.

This morning there was a clear division between 8th and 9th in the heats, nearly four tenths of a second, so those who were outside the top-8 will need a big semi-final swim to get back for the final.

The men’s 100 free will be explosive, after five men went sub-48 in the semi-finals. Mehdy Metella leads the field at 47.65, but Caeleb Dressel should have more in the tank than his 47.66 after leading off the 400 free relay in an American record of 47.26. Nathan Adrian and Cameron McEvoy will have lanes 3 and 6, and Brazilian Marcelo Chierighini will be out in lane 8 after the top 400 free relay split (46.85).

The women’s 50 back figures to be a two-woman race for gold, and the rest of the field fighting for bronze. 2015 gold and silver medalists Fu Yuanhui and Etiene Medeiros were 27.18 and 27.19 in the semi-finals, two of the five fastest swims in history. Kathleen Baker leads the charge for bronze after an American record 27.48 in the semis, but there will be no margin for error with the rest of the five finalists all within twelve one-hundredths of her.

In the first semi of the men’s 200 breast we find Olympic champion Dmitriy Balandin and top seed Yasuhiro Koseki out in lanes 2 and 7 after so-so 2:10 morning swims. Ross Murdoch has lane 4 after a solid 2:08.9 showing in the prelims.

The second semi features Russian Anton Chupkov and world record holder Ippei Watanabe in the center lanes, along with Americans Kevin Cordes and Nic Fink in lanes 3 and 6.

The women’s 200 fly shapes up to be a close race, and the medals could come from anywhere in the pool, as the field was separated by just 1.5 seconds in the semis.

Germany’s Franziska Hentke is the top seed, but she’ll have to deal with China’s Zhou Yilin in lane 5, Japan’s Suzuka Hasegawa in lane 6, and the reigning Olympic champion Mireia Belmonte in lane 3. From lane 7 expect Katinka Hosszu to go out like a rocket, and her and Liliana Szilagyi will both get a big boost from the home crowd.

Lilly King and Molly Renshaw will have lane 4 in their respective 200m breaststroke semi-finals after a relatively sluggish heats session. With both defending champ Kanako Watanabe and Olympic champ Rie Kaneto not competing, this field is pretty wide open.

Yuliya Efimova is the favorite for gold, but was back in just 2:25.63 in the prelims. She’ll swim in lane 7 from the second semi along with Rikke Pedersen, Taylor McKeown, Bethany Galat and Renshaw. Joining King in the first semi will be Spain’s Jessica Vall, Canada’s Kierra Smith, and China’s Shi Jinglin.

Hungarian Peter Bernek will have lane 4 in the first men’s 200 back semi-final after an impressive 1:56.5 swim in the morning. He’ll be surrounded by Ryosuke Irie and Kliment Kolesnikov, and Kosuke Hagino and Jacob Pebley will also swim in the heat after relatively slow prelim swims.

The second semi is a bit more stacked with Ryan Murphy, Xu Jiayu, Evgeny Rylov and Mitch Larkin all in the mix. Lithuanian Danas Rapsys broke his national record in 1:56.67 and will have lane 5 amid the big guns.

We’ll then have the women’s 4×200 free relay, where China led the heat, singular, in 7:51.75. They’re expected to battle the U.S. for gold, with Australia the front-runners for bronze. Relay lineups will be announced a little closer to the session.

You can find all start lists for day 5 finals here.

I think duncan scott will get 2cnd to caeleb

American 4×200 relay is capable for American record. It depends if two sprinters will go for their personal bests and on Ledecky’s performance. The later factor is unpredictable at this meet. She can show her third best time after swimming fourth best time in history at 1500 and then after having full day of rest to swim her 20est time only.

Relay lineups are out.
No Kapas for Hungary, no Oleksiak for Canada. The rest pretty well as expected.