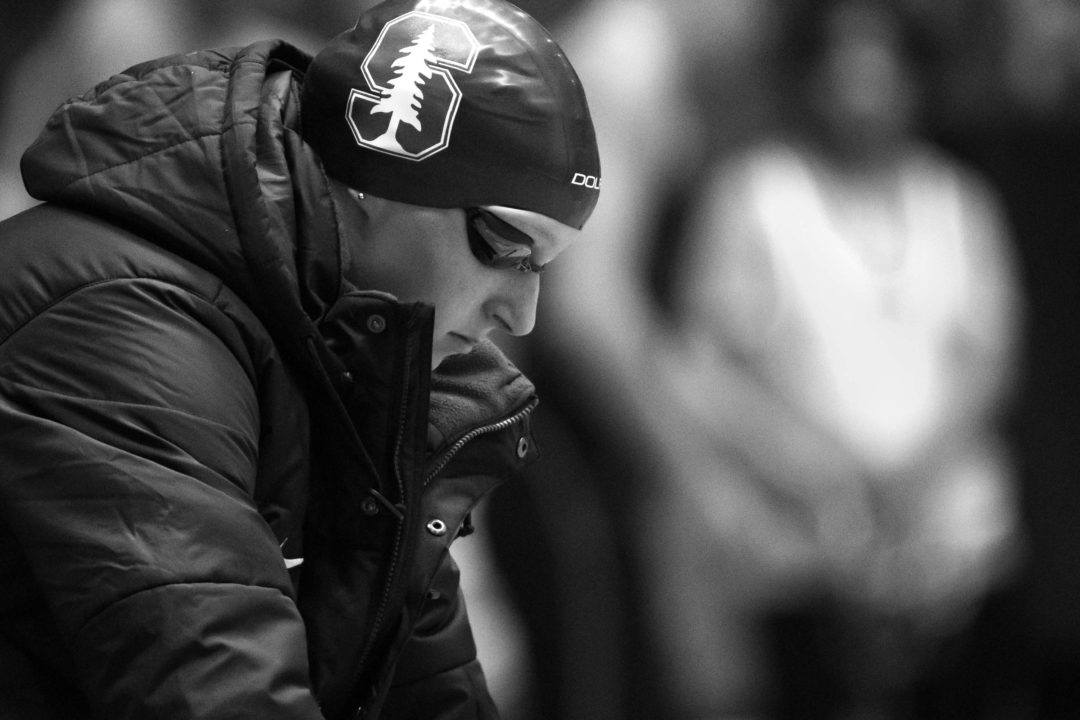 You'll never guess who we ranked #1... Ok, you might. But there are a few interesting offseason shake-ups, including one team outside the top 10 last year bringing in two impact transfers to surge towards the top 5. Archive photo via Mike Lewis/Ola Vista Photography 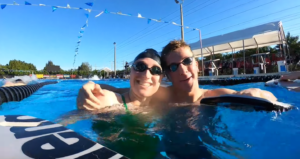 The Notre Dame men’s and women’s swimming & diving teams are a combined 4-1 in dual meets since their New Year’s training trip to Naples, Florida.

After a disastrous zero-point showing at NCAAs last year, Florida already looks improved. The 13-woman NCAA roster was more than half (7) freshmen with three sophomores and only two seniors. Plus the team brought in blue-chip freshman Taylor Ault, who fits the distance-based Florida philosophy to a ‘T’. And though it doesn’t factor into our rankings much, Savanna Faulconer looked more than solid at the All-Florida Invite over the weekend.

Natalie Pierce is back after her breakout junior year and the Seminoles return all 24 NCAA points from a year ago. Things should only improve in year 2 under coach Neal Studd, especially considering the team could have nearly doubled its NCAA point total last year without DQs of both medley relays.

Outside of distance star Ashley Neidigh, it was a young NCAA crew for the Tigers last year, and three of four NCAA scorers return. That includes current senior flyer Haley Black.

Virginia is in tough shape without Leah Smith (48 NCAA points), Laura Simon (19) and Kaitlyn Jones (16). But new head coach Todd Desorbo brings in a wave of momentum after his sprint groups at NC State blew up year after year. Jen Marrkand is a star in the making and freshman Paige Madden could become a monster under Desorbo’s tutelage.

The Vols added arguably the class’s best breaststroker (59.5/2:08.9 Nikol Popov) to a program that made Molly Hannis a U.S. Olympian. Oh, and a team could do worse for its relays than adding 22.1/49.1/1:43.9 freestyle transfer Stanzi Moseley. And they return elite-tier versatile sophomore Meghan Small. Don’t sleep on this team moving forward.

Zhesi (Liz) Li by herself is a one-woman wrecking ball. Lindsay Clary exits, but OSU brings in the hyper-versatile Kristen Romano as well as big-time backstroke transfer Hannah Whiteley for what could be sneaky-good medley relays.

Graduated Danielle Valley was the team’s biggest NCAA scorer and fellow graduate Chase Kinney was the heart and soul of the Badger relays. But Cierra Runge‘s got huge potential after a solid summer and Beata Nelson has the ability to be a terror for opponents if things come together in her sophomore year.

Backstroke U brings back three big NCAA backstroke scorers (Asia Seidt, Ali Galyer, Bridgette Alexander) but does lose one of their best backstrokers in Danielle Galyer. Seidt, in particular, is a budding star and the Wildcats were relatively young while taking 14th last year.

Mizzou got zapped big time by graduation, but incoming transfer Annie Ochitwa is a massive value. Her relay prowess (22.1/48.5 free) and sprint versatility (51.0 fly, 51.2 back) elevate the entire program. And Hannah Stevens continues to come into her own in the backstrokes.

Losing Olympian Kierra Smith ain’t easy, but I guess when you’re Minnesota, you always have another breaststroker in the pipeline. The Jill Tyler/Haley Spencer/Kierra Smith legacy continues with Lindsey Horejsi, who was the NCAA runner-up in the 100 breast as a freshman. Getting all-star distance swimmer/IMer Brooke Zeiger back healthy is key, as is helping speed Canadian World Champs team member Mackenzie Padington‘s transition into short course yards.

Lilly King not only locks down both individual breaststrokes, she’s so much better than the rest of the nation that she single-handedly makes IU’s medley relays relevant. After her best summer yet, King doesn’t look to be slowing down. The recruiting class is deep but somewhat light, though Grace Haskett (22.6 free) looks like a candidate to be the star sprinter for which this team has been searching for years.

Now-graduated Alexia Zevnik was the breakout powerhouse of this program last year, but there always seems to be someone new blowing up in Raleigh. Freshman sprint star Ky-Lee Perry looks like a good candidate in her second year. And the Pack added a huge recruiting class that includes two major impact transfers: A&M 22.4/49.0 sprinter Lexie Lupton and FSU miler Summer Finke who is coming off a massive summer.

It’s a small but high-impact recruiting class for USC, a talent-laden team that made the top 10 last year despite not even swimming its best at NCAAs. Fly/free specialist Louise Hansson is a machine, and a popular pick to win the national 100 fly title. Margaret Aroesty (58.9/2:09.4 breast) is the crown jewel of a stellar nationwide recruiting class in the breaststrokes. Marta Ciesla is a key sprint pickup, and the Trojans graduate just 6 of the team’s 176 NCAA points.

The biggest movers and shakers of the offseason, the Wolverines add a class that arguably rivals Stanfords when you factor in transfers. Miranda Tucker was an NCAA runner-up as a freshman, and it’s just gravy for Michigan that she transfers in from the team’s biggest Big Ten rival (Indiana). Taylor Garcia is a 22-mid sprinter and a great backstroker on her way in from Arizona. The roster is already loaded in the 200 on up with Siobhan Haughey, Yirong Bi and G Ryan. Plus rookie Alexis Margett joins last year’s breakout freshman Vanessa Krause in the butterfly races. There are a lot of reasons to be excited about this team.

Mallory Comerford feels as unstoppable as anyone in swimming right now, and gives this team a bona fide star to rally behind. Ashlyn Schoof is arguably the best backstroker in this freshman class, but has plateaued a bit late in high school – fans will have to hope a new setting in a Louisville program that’s one of the NCAA’s most exciting is exactly what Schoof needs to kick back into high gear. And don’t sleep in the sprint group: Louisville took 6th at NCAAs last year in the 200 free relay with the sophomore Comerford and three pretty much unknown (for now) freshmen who split between 21.8 and 22.3.

A great regular season was mostly met with skepticism by fans accustomed to disappointing postseason showings. But there should be no more doubters after a prove-it NCAA meet from the Longhorns. Sure, losing Madisyn Cox smarts, but Texas returns five other individual scorers, and that doesn’t include Remedy Rule, who had 16 points wiped out on a controversial DQ. Also, three of those individual scorers were freshmen. Also, they bring in big-time breaststroke transfer Kennedy Lohman and top-20 recruit Victoria Edwards. Also, they have style all their own.

On the one hand, this feels a little high considering the impact players UGA graduated (Olivia Smoliga, Chantal van Landeghem, Emily Cameron). On the other hand, it’s a sign of respect to coach Jack Bauerle‘s ability to continually develop replacements. And it might have something to do with bringing in #1-ranked recruit Courtney Harnish. Plus Chelsea Britt is just starting to get going, the ‘Dawgs get the combined power of both Burchill sisters (scoring fly/free sprinter Veronica and stellar incoming IMer Sammie).

The Aggies success somehow feels way too quiet. Who saw this team dethroning Georgia so definitively in the SEC and rising all the way to third nationally? The IM and breaststroke groups are loaded behind international players Sydney Pickrem (Canada) and Bethany Galat (USA). And coach Steve Bultman – known for turning unknown prospects into stars – pulled in three of our top 20 recruits in the nation, each coming in with NCAA scoring times before stepping foot on campus. Especially watch Anna Belousova, who joins a breaststroke group that’s been a factory for producing collegiate and international stars.

If it weren’t for Stanford, maybe it would be the talent on Cal’s roster causing swim fans to worry that the entire NCAA will pack it up and sit out the season in a protest for parity. (No joke, that worry has actually been stated in our comment section). Abbey Weitzeil scored 25 individual NCAA points without even scratching the surface of her potential. Kathleen Baker is approaching international icon status after silver medals in Rio and Budapest. Maddie Murphy turned out to be a diamond in the rough as a rookie. Getting Katie McLaughlin and Amy Bilquist back to full strength would put this team into scary territory. It’s an international-heavy recruiting class, but Robin Neumann (Netherlands) and Sarah Darcel (Canada) look like big gets.

Was there ever any doubt? Ella Eastin and Simone Manuel are proving a cut above anyone else in their events. Katie Ledecky is Katie Ledecky. Ally Howe and Janet Hu were some of the NCAA’s highest scorers without even having their best times at nationals. Add in a recruiting class that includes 5 of our top 20 recruits and you’ve got an easy consensus #1. Brooke Forde is probably the best incoming freshman in the nation with three NCAA scoring times. Could Grace Zhao fill the team’s only true hole, breaststroke? That’s basically the most burning question about this roster, and it amounts to whether Stanford is the best team in the NCAA by a lot or by a whole lot.

Don’t forget about Ashley Volpenhein for Stanford sprint!!!! She will be sneaky fast this year!

Why even have NCAAs? Stanford runs away with it.

So that swimmers can post Best Times? So that we can watch exciting Relays. So that all of the top swimmers can compete. That’s the beauty of swimming, it’s both a team and an individual sport, so the NCAA Championships are still exciting.

It is always deep