The Week That Was In College Swimming (Week 3) 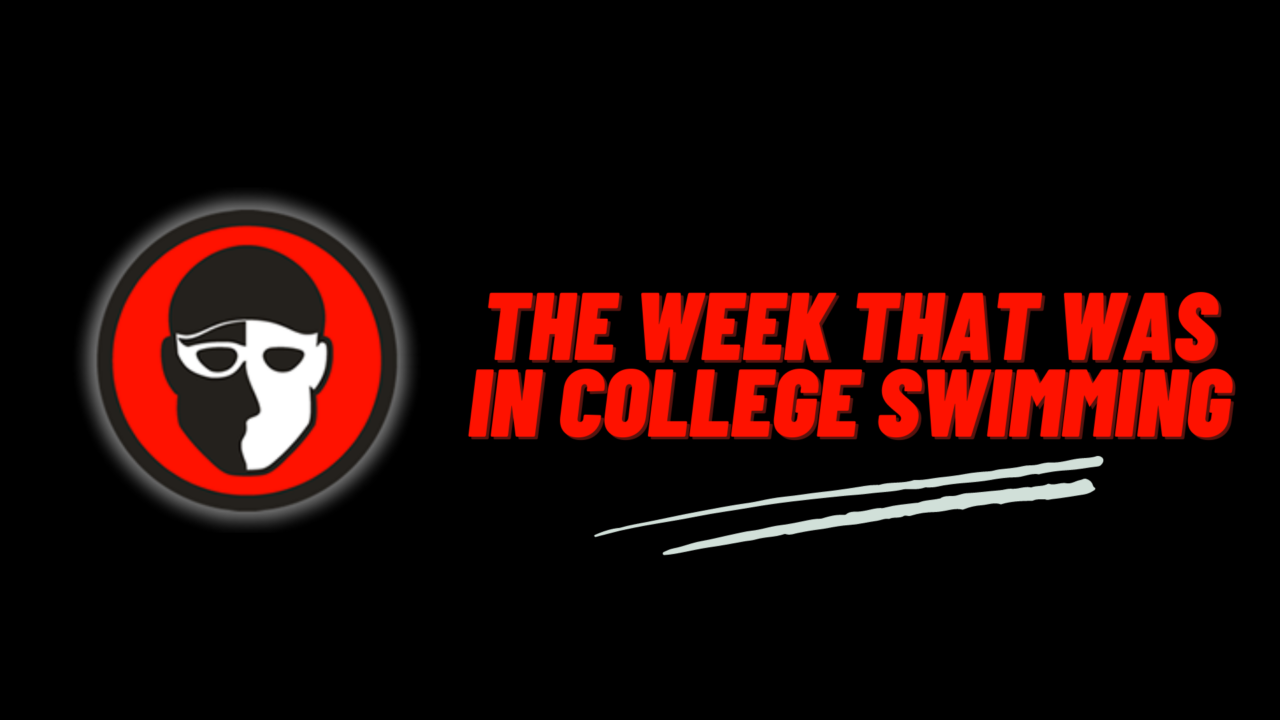 Recapping The Madness of the UVA v. UF Dual

The dual meet between the Virginia Cavaliers and the Florida Gators gets its own section because so much happened. Despite all the action, it’s easy to choose a place to start, and that’s with Gretchen Walsh‘s performance.

Walsh wasted no time getting her sophomore season off to a red-hot start. In the opening 200 medley relay, she blasted a 21.91 50 fly, which edges out her teammate Kate Douglass for the fastest split in history. But she wasn’t even close to done, as she then scorched 50.53 in the 100 fly, beating the 50.84 Maggie MacNeil went earlier this year for the fastest unsuited mark of all-time. Her freestyle swims were wickedly fast as well; she clocked a 21.40 50 free for the fastest time in the NCAA this year, then lead off the 400 free relay in 47.61. And that 400 free relay team of Gretchen and Alex Walsh, Douglass, and Maxine Parker blazed a 3:11.37, which would have finished eighth at 2022 NCAAs.

We already knew that the Virginia women were incredibly talented, but somehow they continue to keep impressing. In just their first meet of the season, they’ve raised the bar for the rest of the NCAA. As for the younger Walsh, we know that DeSorbo is big on having his swimmers swim events that excite them, so does this change her NCAA event lineup? There’s a clearer path to victory in the 100 back than the 100 fly, but Walsh is riding a hot hand right now.

On the men’s side, it was the sprinters who made a lot of noise. In only his second collegiate dual meet, Josh Liendo raced to a 19.27, the fastest time in the NCAA this year. After the race, Liendo talked about what the transition from meters to yards has been like, and his new focus on breath control.

In the 100 free, it was Matt King who came out on top in 42.86. That’s the fastest time in the NCAA this year for the UVA junior. King had a massive breakthrough in long course this summer, lowering his 50 and 100 freestyle bests multiple times on the way to national titles in both events. Todd DeSorbo talked on the SwimSwam podcast about how data tracking helped King drop from a 22.57 to 21.83 in the LCM 50 free.

Noah Nichols got in on the fun in the 100 breaststroke, dropping a 52.23, which is about two-tenths off the 52.00 he went to finish 19th at NCAAs. It took a 51.92 to score last year, and it would be huge for the UVA men if they could get another scorer as they aim to move up in the standings.

What You Missed While Watching UVA v. UF

Jordan Crooks, Tennessee – King of Consistency: Sophomore Jordan Crooks popped a 19.35 to win the 50 freestyle in Tennessee’s dual with Louisville this week. It’s a speedy time for October, but the time is perhaps less impressive than the fact that he’s now been 19.3 4 times this season. He opened with a 19.37 for the first meet of the season, then went 19.36 and 19.37 against NC State. It’s incredible consistency–especially when you add in that when he anchored the 400 free relay at the end of the meet, his first 50 split was another 19.37.

Johanna Buys, UIndy – Next In Line: Sticking with the 50 freestyle but heading to Division II, UIndy’s Johanna Buys dropped a 22.78. That’s only .03 seconds what the fifth-year swam to finish third at 2022 NCAAs. It’s a strong October swim for her, especially when you factor in that the swimmers who placed first and second swam for Queens, so they won’t be returning to Division II NCAAs this season. Being so close to her bronze medal time this early in the season solidifies her as the favorite to claim the 2023 title.

Brendan Burns, Indiana – Triple Threat: It came down to the last relay, but Indiana was unable to pull off a win against the Texas Longhorns. Despite the loss, they had several strong performances on the day, highlighted by triple event winner Brendan Burns. Burns, the reigning NCAA champ in the 200 fly, went head-to-head with Carson Foster in both the 200 fly and 200 back. He came away victorious in both events, winning the 200 fly in 1:42.25 and the 200 back in 1:41.46. The 200 fly is about where he was this time last season, but the 200 back is a huge jump–in October 2021 his fastest time was 1:44.00.

UNC diver Emily Grund was back on the boards for the Tar Heels meet against UNCW. It was the All-American’s first meet since 2021 Olympic Trials. Shortly after that, she was diagnosed with a rare form of Leukemia. She sat out last season for treatment, and was declared cancer free in February 2022 after more than five months of treatment. She placed second on 1-meter and third on 3-meter in her senior season debut, helping UNC to a win.

Practice of the Week

Brad Dunn, head coach at the University of Lynchburg, sent us this absolutely excellent practice celebrating Taylor Swift dropping her album Midnights. If anyone based a practice on Carly Rae Jepsen’s The Loneliest Time, which released the same day, please speak up.

Hey @swimswamnews did I get our @taylorswift13 practice right? pic.twitter.com/mJ7F38ofhI

After graduations and the recent apparent exodus, Texas looks as weak as they’ve been in years. I don’t know what’s up with van Zandt, but they need him there to shore up sprint fly and they need one of their other backstrokers to step up, plus they could really use some development from the younger sprint freestylers. Maybe this will all look overblown come midseason invite time (i.e., a nice Crosby taper would really help the latter two), but at this moment, Florida and NC State are both better than Texas is my mind. Indiana is obviously not far off, and Georgia and ASU might also not be far off.

5
0
Reply
oxyswim
Reply to  JP input is too short

I don’t think IU has enough to get all the way up to second without Hafnaoui this year. They’re really good though, and most don’t recognize the full impact their divers make.

Worth noting that IU was without its 2 best divers; Carson Tyler at the diving World Cup in Germany and Grandpa Capobianco saving his last semester of eligibility for the spring.

Ha, that reminds me of Drury stalwart Tomas Kuzvard, who rode the D2 eligibility rules to I believe 6 NCAA meets, the last in 2009 at the age of 30. 19 year old freshman me was next to him in a final in 2008.

8
0
Reply
Entgegen
Reply to  JP input is too short

I want to learn more about this man.

0
0
Reply
Meow
Reply to  JP input is too short

You know what, I respect that.

Hmmm that story might be more legend than fact. Kuzvard only swam at Drury 2006-2009 as far as I can tell.

He was born in 1979 though, so he turned 30 in 2009, the year of his last NCAA Championship meet (not sure whether it was before or after NCAAs). According to his LinkedIn page, he got a Masters degree from the University of Prague before he began his career at Drury (and he wound up with a Bachelor’s and Master’s from Drury). His LinkedIn says he was at University of Prague through 2005, so would’ve been tough for him to be at the 2004 NCAA Championships.

Yeah, I just found Drury’s all time All American board and you’re right. That’s what I get for trusting what the upperclassmen told me!

It’s amazing the things that people will say when they’re mad at their opponents for winning :-).

and that’s the 11 points IU needed to win the meet. Granted, it is an early season dual meet, but IU showed up to swim and Texas didn’t.

Great point. Classic, I am always forgetting the divers.