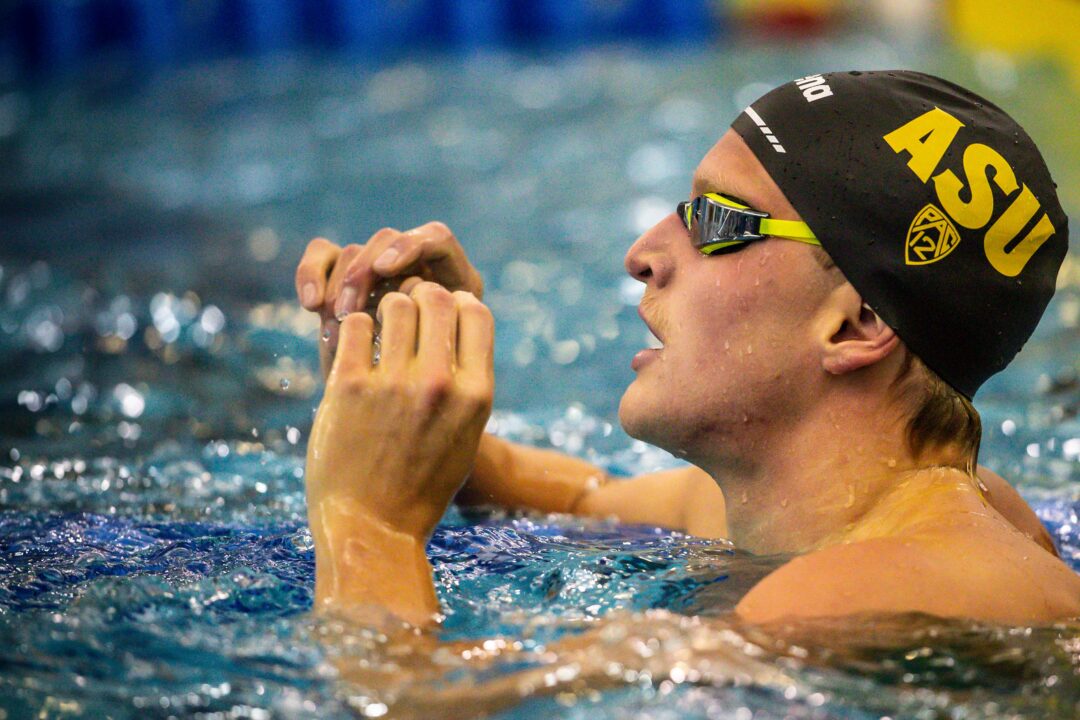 The #5 Sun Devil men dominated in their dual meet win against Wisconsin, while the #14 Badger women did the same in their victory over the ASU women. Archive photo via Jack Spitser/Spitser Photography

The ASU men were ready to go from the very first event, going on a nine event win streak that stretched from the opening 400 medley relay to 1-meter diving. In the pool, they kept it going until the 200 breaststroke where Wisconsin’s Matthew Segal took the win in 1:59.91.

Unsurprisingly, both Leon Marchand and Grant House played big roles in the victory: they both swept their individual events and were a part of both winning relays. Marchand is now 7-for-7 in individual event wins for the season. At this meet, he earned wins in the 100 breaststroke, 200 backstroke, and 400 IM. His 400 IM was the highlight of the three; he posted a 3:41.59 to earn his win over 17 seconds ahead of the field.

It wasn’t just the Sun Devil returners who impressed, though. Outside of Marchand’s incredible success, one of the things giving ASU so much momentum this season is that they had few key losses and gained a lot with an extremely strong recruiting class.

The hyper-versatile freshman Owen McDonald captured his first collegiate victory with a win in the 100 backstroke in 47.61. That’s less than a half second off his lifetime best 47.21, which he swam in December 2021. In the same event, the DIII champion Jack Wadsworth, who transferred to ASU this season from Ithaca College, took third in 49.91. He led off ASU’s 400 medley ‘B’ relay with a 48.06. These two times are a strong sign for the transfer that he’s adjusting well to Tempe; this point last season he had yet to break 50 seconds. Wadsworth also finished second to Marchand in the 200 back, 1:42.82 to 1:48.58.

Fifth-year transfer Max McCusker also made his mark, earning wins in the 50 free (20.07) and the 100 fly (47.04). McCusker spent his undergraduate career at FSU and like Wadsworth, is already faster than his October 2021 self.

It was junior diver Daniel Muller who highlighted the meet for the Badger men, as he won both boards. He was the only multi-event winner for Wisconsin, who earned four event wins total.

Jake Newmark earned the win in the 500 free with a time of 4:22.58 after finishing second to House in the 200. It was a season best for the NCAA qualifier, who was 4:33.90 in October 2021. Wisconsin’s other individual event winner was Segal, who snapped ASU’s streak of wins in the pool. He did so by winning the 200 breaststroke, out-touching David Schlicht.

The Sun Devils dominated the men’s meet, but it was a different story on the women’s side, as the Badgers took control early.

Wisconsin won the opening 400 medley relay in 3:39.43, then swept the first three spots in the very next event, the 1000 freestyle. It was NCAA champion Paige McKenna who took the win in 10:04.01. She’s been 9:58.78 already this season, but it’s a stellar swim for her second meet in two days, especially as she had surgery in the offseason to repair a torn labrum. Her teammates Alivia Lindorfer (10:08.99) and Elle Braun (10:10.08) touched second and third.

Olympian and Worlds medalist Phoebe Bacon did her thing, taking the win in both backstroke events. In the 100, she clocked 54.50, slightly slower than her 54.18 leadoff from the opening 400 medley relay. Last season, she hovered around 54-low before making the jump to 51.38 at the Minnesota Invite, so she’s a little off where she was at this point last year.

One of the most intriguing things about this Wisconsin team is their freshmen class, which we ranked as #8 in the country. Given how tight 11th through 17th was at NCAAs last year (the Badgers finished 17th), this recruiting class could be enough to push them up the standings.

Like the ASU men, the Wisconsin women started off the meet on a winning streak, but it took only five events for the Sun Devil women to get in on the action. It was Jade Foelske who snapped the streak, winning the 200 fly in 1:59.09. She held off her teammate Lindsay Looney for the win. Looney settled for second in 1:59.82. The redshirt junior also took second in the 100 fly (54.30) and third in the 400 IM (4:22.65).

After making waves at the Sun Devil Challenge to kick off the season, Charli Brown won the 400 IM in 4:18.81, two seconds ahead of second place Katie McClintock. This time last year, the Australian swam her first 400-yard IM and posted a 4:24.38, so this is a massive improvement from a year ago.

The Sun Devils kick off Pac-12 competition with back-to-back duals with USC and UCLA (women’s only) on November 4th and 5th. The Badgers are also back in action on November 4th, against Big 10 foe Minnesota.

McDonald and Wadsworth had fine swims in the 100 Back, but while you noted Wadsworth had been significantly faster in leading off the ASU “B” relay, you didn’t note the fastest 100 Back on the day came on the ASU “A.” Jack Dolan was :46.77 in that slot, the only provisional cut (:47.59) swim on the day in the event.

There have been several comments in SwimSwam notes about ASU newcomers in the last few months, including Owen McDonald, Max McCusker and Jack Wadsworth in this article.

Once in a while exhibition swims in college meets produce swims worthy of comment, often by newcomers. There were two heats in the men’s 400 IM, the event in which Marchand… Read more »

4
0
Reply
Swimmin in the South
Reply to  dscott

A lot of comparing here to other swimmers and other times (not done at this meet). At the end of the day, he went 3:57. He made winter juniors. Congratulations.

Ah… the green eyes of envy.

Did anyone see those 2 free relays?

Yes, I was at the meet. You have a question?

Matthew Segal: my goat for all time

Regan Smith, Olivia Smoliga and Simone Manuel all swam too

How did they do?

How did Ryan Held do?

Doesn’t look like Held swam. Only Smith, Smoliga and Manuel

Found some videos for their swims as well. Kalisz and Litherland also put up a few swims.

Go to the comments section on the SwimSwam blurb on Simone’s swims. All times and splits from pro group swims done in the diving breaks.

Found a video of the 200 Back. Leon had absolutely no business putting up THAT great of a swim in what is his “weakest” stroke.

With Leon, Weak is relative! Do you really think that Bob Bowman would let him slack off on improving his backstroke?

Do you have a link to the video?

Ya it’s called click the hyperlink in the “200 Back” text.