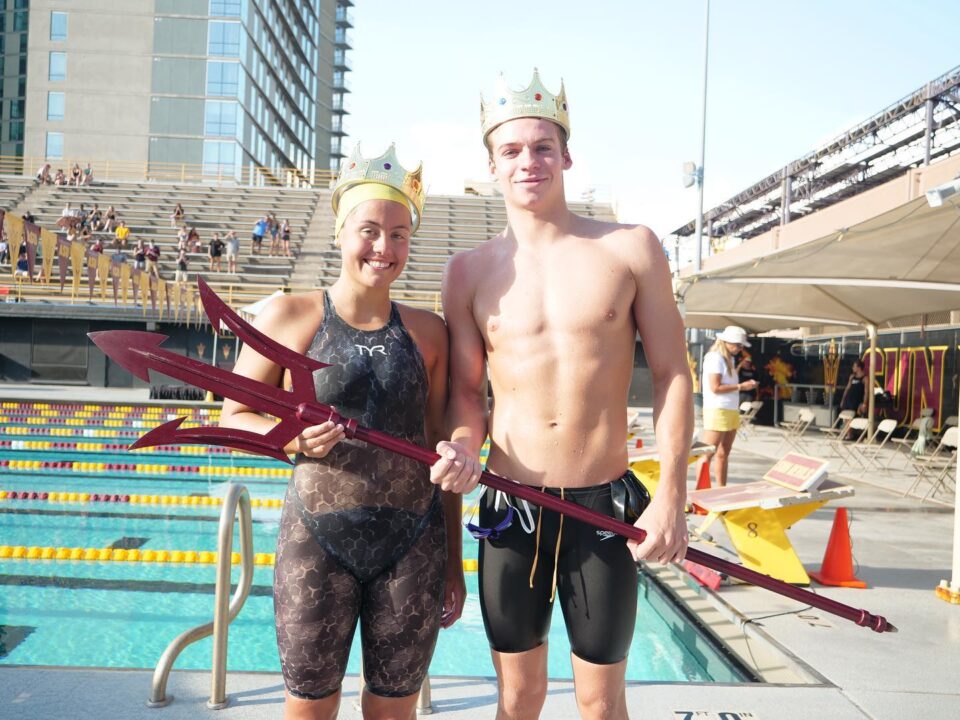 The Arizona State Sun Devils kicked off their season with a bang at the Maroon & Gold Intrasquad Meet, dropping some serious times for this early in the season.

The meet ran as a pentathlon, with swimmers–including some of ASU’s pro group–suiting up for five events: a 100 of each stroke, then a 100 IM at the end. While there are winners of each event, times from all five races were added up to crown Leon Marchand and Charli Brown as the winners of the Sun Devil Challenge.

No surprises here, it was 200 and 400-meter IM world champion Marchand who took the win on the men’s side, blasting to a 3:53.31 overall time. He won every event except the 100 free, which went to  Grant House in 42.19. House was second overall in 3:55.52, the only other swimmer under the 4:00 minute mark. He also finished top three in each event. David Schlicht rounded out the top three with a 4:02.70. Below are Marchand’s times for each event:

46.63 is unofficially the second fastest SCY 100 IM in history. Only Shaine Casas has been faster, when he logged 46.33 at a Texas A&M dual meet in December 2020. Before that, the fastest verifiable SCY men’s 100 IM was 47.06 done by Matt Grevers in a race against Michael Phelps and David Nolan in 2016.

In addition to the blistering 100 IM to finish up the meet, the time that really stands out is his 52.00 100 breaststroke. That puts him less than two-tenths away from the ASU school record, which is held by John Heaphy at 51.82. Heaphy, a redshirt junior, clocked 53.76 to finish fifth in the event.

For context, being under 4 minutes for the pentathlon is incredibly fast. Cal runs a similar event with Cal Poly called King and Queen of the Pool, and while we can’t guarantee the same conditions, Hugo Gonzalez won the 2021 edition in 4:05.15. Zheng Quah won with a 4:02.68 in 2019. Texas, Virginia, and Indiana race quadrathlons with 50s of stroke.

Update: ASU Associate Head Coach Herbie Behm has said on Twitter that the whole meet took an hour and fifteen minutes, which gives a better sense of how much rest the athletes got in between races.

The fact that ASU had not only one but two swimmers under 4 minutes is hugely exciting for a program that’s looking to play spoiler at both the conference and national levels. Though Marchand will likely stick to the IMs and 200s of stroke, the fact that his speed is already there so early in the season is a promising sign.

Watch Marchand close out his 100 IM below:

Léon Marchand closes out our intrasquad with a 46.63 in the 100 IM 😈 pic.twitter.com/eNh0xkTsXP

The women’s edition of the pentathlon was similarly speedy. Sophomore Charli Brown took the win, ripping a 4:35.53 to win by 3.63 seconds ahead of Lindsay Looney. The gap between second and third was much tighter, as Looney got the better of Ieva Maluka, 4:39.16 to 4:39.77.

Last season, the Australian’s championship meet was the PAC-12 Championships, where her best finish was 12th in the 400 IM.

Looney also won two events, posting 52.80 in the 100 fly and 49.60 in the 100 free to place first. Looney was the Sun Devil women’s best scorer at 2022 NCAAs with seven points. Those are ASU’s only returning points on the women’s side, as they’ve graduated fifth-years Erica Laning and Emma Nordin.

The overall times that the women put up are also some of the fastest pentathlon times we’ve seen. Comparing them again with Cal’s edition of the race, last year Izzy Ivey was crowned Queen of the Pool with a 4:39.91, and Abbey Weitzeil won in 2019 in 4:38.76.

It’s still early in the season, but that’s a huge confidence boost for a women’s team that graduated most of its NCAA points and is looking for the same breakthrough that the men have had. Looney will certainly be an important part of that push, and now it looks like Brown will be as well.

Up next, the Sun Devils start inter-collegiate racing on September 30, when they face the Georgia Bulldogs. The next day on October 1, they have a tri-meet versus Georgia and Missouri.

I found the depth of particular interest; it will be fun to gauge squad progress at the end of the season.

Marchand IS the most talented world class all around male swimmer we have seen since Caeleb Dressel. Popovici is strictly a freestyler, and will continue to break freestyle records but does not currently swim other strokes at the International Meets. Of course, he just turned 18 too, and this could change! Time will tell. Anyway, I believe this young man Marchand will not only take out the 200M IM, 400M IM World Records in time, but he will shatter our YDS USA OPEN and NCAA records in the 400yd IM, 200yd Breast accompanying his 200yd IM record, during his tenure at ASU. Well, it could happen this coming season. Not sure he will stay an amateur. He could, of course,… Read more »

You seem to forget about Milak! He has top wor times both free and fly as far as I know Marchand does not reached that level yet. Also would suggest to check on Ceccon – world record holder in Back world class timing in free and fly too… unless you add that NCCa swimmers

Oh, I haven’t forgotten about Milak. I was simply referring to Marchand and Foster in the IM disciplines. Milak is VERY talented and Versatile. I am hoping Dressel will come back, but if chooses not to, I believe Milak will take Dressel’s 100M FLY world record down. Milak could possibly challenge Popovici in to 100M Free.

I’d love to see Kate Douglass and Alex Walsh go head to head in this format. I *think* AW would be slightly favored but really, everyone watching would win.

Head to head, My money is on Kate Douglass! I think both ladies are the future of USA INTERNATIONAL Swimming; although I feel Kate lags Alex in meters! Kate will get better in Meters! This young ladies fire is undistinguishable! Alex and Kate have the hardware; although Alex is a step ahead in the International scene! Kate and Alex aren’t going ANYWHERE! PLEASE don’t forget GRETCHEN! PURE SPRINTER! This girl could take out the 50yd Free, 100yd Free and 100yd Back American, US OPEN and NCAA Records in these 3 disciplines! We as American Swimming fanatics are BLESSED to have these 3 ladies on the same University Team and to be the future of USA Women’s Swimming!!!

Good point about Gretchen – she could challenge KD and AW in this format, but much like MM the time loss in the breastroke might be too much to overcome.

If the 100 IM had been an event the past 40 years, Grevers would go down as best all time

This is obvious already, but Marchand is really, really good all around. Idk his times from before, and without looking them up I can guess he’s improved since Worlds. His freestyle and backstroke were absolutely the reasons he didn’t break the WR in the 400 IM, and now I just can’t imagine that a 46-mid and 42.5 won’t eventually equate to much more “Phelpsian” 400 IM splits on those strokes, because in the breast he just annihilates him.

Marchand’s backstroke in short course doesn’t say much about his ability to swim it in a 400 LC. He’s underwater for 2/3 of the race.