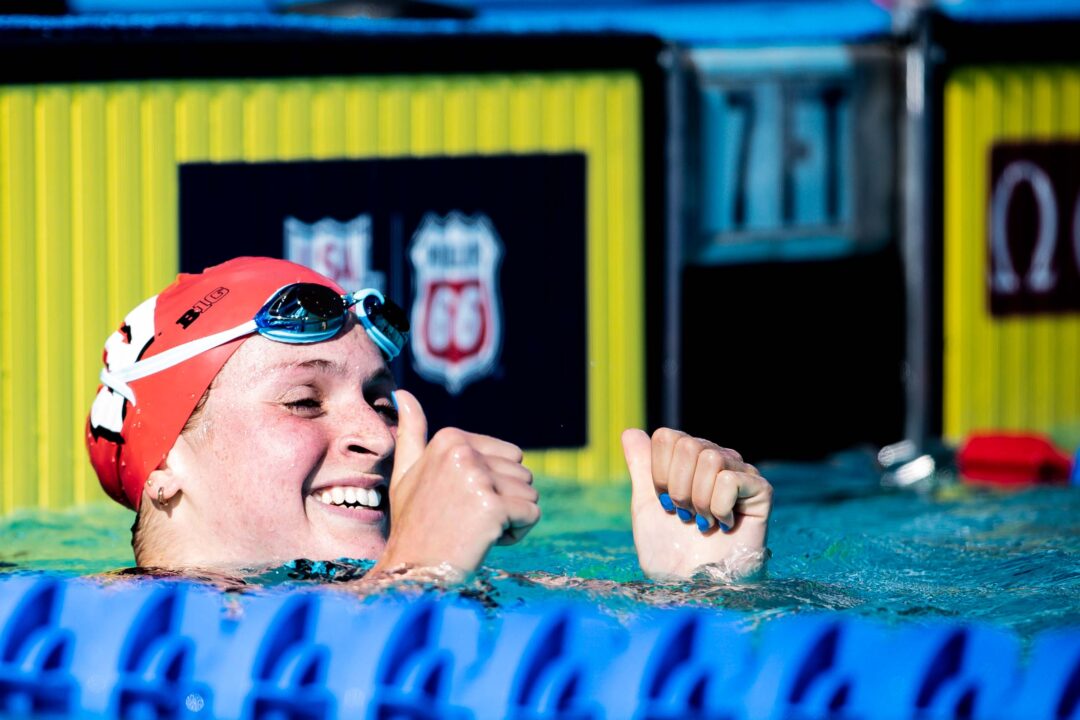 Florida distance star Blair Stoneburg is a huge get for a Wisconsin program that already has last year’s breakout NCAA mile champion Paige McKenna on the roster. Stoneburg is already faster in the 200 free (1:44.6) and 500 free (4:38.8) than McKenna was out of high school, though McKenna was always most centered around the mile. Stoneburg’s lifetime-bests would have scored at last year’s NCAAs in the 200 free and 500 free, and she should be an immediate upgrade to the 800 free relay, where Wisconsin had a pair of 1:45s on their 10th-place relay last season.

Speaking of relays, 22.5/49.3 sprinter Abby Wanezek should be a solid addition to the relay room. She’s also a 53-second backstroker. It’s a relatively small class, but the likely impacts of Stoneburg and Wanezek are plenty to get this group into the top 10. If one of the more developmental recruits really pops, then watch out for this group.

The Blue Devils nabbed a pair of our top 20 recruits, both fast risers who were not in our national top 20 ranks when they were recruited as sophomores and juniors. Kaelyn Gridley is a really exciting prospect. She dropped almost five seconds in the 200 breast to take over as the fastest 200 breaststroker in the nation for this recruiting class at 2:08.3. She’s also a sub-minute 100 breaststroker who is dropping time in a hurry and could be a major player on the college level.

Martina Peroni out of Ohio is a 52.9/1:55.1 butterflyer with a ton of versatility. It seems very possible that she and Gridley wind up forming the core of a medley relay down the road, but Peroni is also a good enough IMer (1:57.7/4:14.4) that maybe her best college potential lies there.

Tatum Wall will bring 22.5/49.5 speed to the free relays – she was one of our “best of the rest” swimmers just outside the top 20 ranks. The rest of the class features a pair of 53-second butterflyers in Issie Abrajan and Madeline Meredith and a 53-second backstroker in Kiki Kennedy. Dartmouth fifth-year transfer Mia Leko is 1:57.6 in the 200 fly and Audrey Portello adds another 4:14 IMer to the mix.

USC has a nice mix of ranked recruits, internationals, impact transfers, and developmental prospects in a fairly large recruiting class. Justina Kozan fell a little in our ranks as a senior, but remains one of the best freshmen in the country with NCAA scoring times in the 400 IM (4:05.6) and 200 fly (1:54.2) to go with a 1:56.3 in the 200 IM. Her versatility should be key for USC, and going 1:44.4 in the 200 free means she’ll also have good relay value.

On the transfer side of things, the Trojans got two additions from Pac-12 rivals. Former Stanford diver Carolina Sculti was an NCAA A finalist on the 3-meter springboard last year and is a two-time Pac-12 champ and five-time All-American. Elise Garcia is a 22.1/48.5 sprinter who split 21.4 and 21.6 on Cal free relays at NCAAs last year.

Then there’s Canadian backstroker Ashley McMillan, whose short course meters times of 56.9 and 2:06.5 roughly convert to 51.6 and 1:53.9, right on the cusp of NCAA scoring range.

Also keep an eye on speedster Sydney Brakebill, who is 22.6 in the 50 free but still needs to develop some longer endurance. That kind of pure speed could mean a lot on relays down the road.

Just how much impact will Maggie MacNeil have on this LSU program with one year of eligibility remaining? Even with limited time, it’s hard to overstate how good MacNeil is. She’s an Olympic gold medalist, multi-time world champion, and NCAA record-holder in the 100 fly. Though she slipped to third in that event last year, MacNeil is the only woman in history to break 49 seconds in the event, going a mind-boggling 48.8 back in 2021.

MacNeil’s best times of 21.1/46.0 in freestyle, 49.7 in backstroke and 48.8 in butterfly are indescribable game-changers to LSU’s relays, none of which qualified for NCAAs last year.

MacNeil doesn’t carry quite the same kind of recruiting value she would if she had four years of eligibility remaining like many of the other names in these ranks. But even with a single year, she’s enough by herself to vault this class into the top 5 nationally.

LSU got another key transfer in Canadian Jade Hannah, a former USC Trojan. Hannah has three years of eligibility remaining and her overlap year with MacNeil has the potential for some incredibly explosive relays. Hannah has been 52.6/1:53.9 in the backstrokes, though her long course meters times (59.6/2:09.2) are arguably much faster.

The rest of the class is definitely on the developmental side, but 22.9 sprinter Hannah Womer will be a nice addition to LSU’s stable of relay options to join MacNeil.

Excited to see Army on the mens side.

Cal hasn’t published their 2022-2023 roster, so unless there is some unexpected surprise, here’s the breakdown on their class:

Cal was competitively in trouble even before the Teri McKeever news broke.

Where is Regan Miller for Wisco ?

Rick Bishop is a pretender.