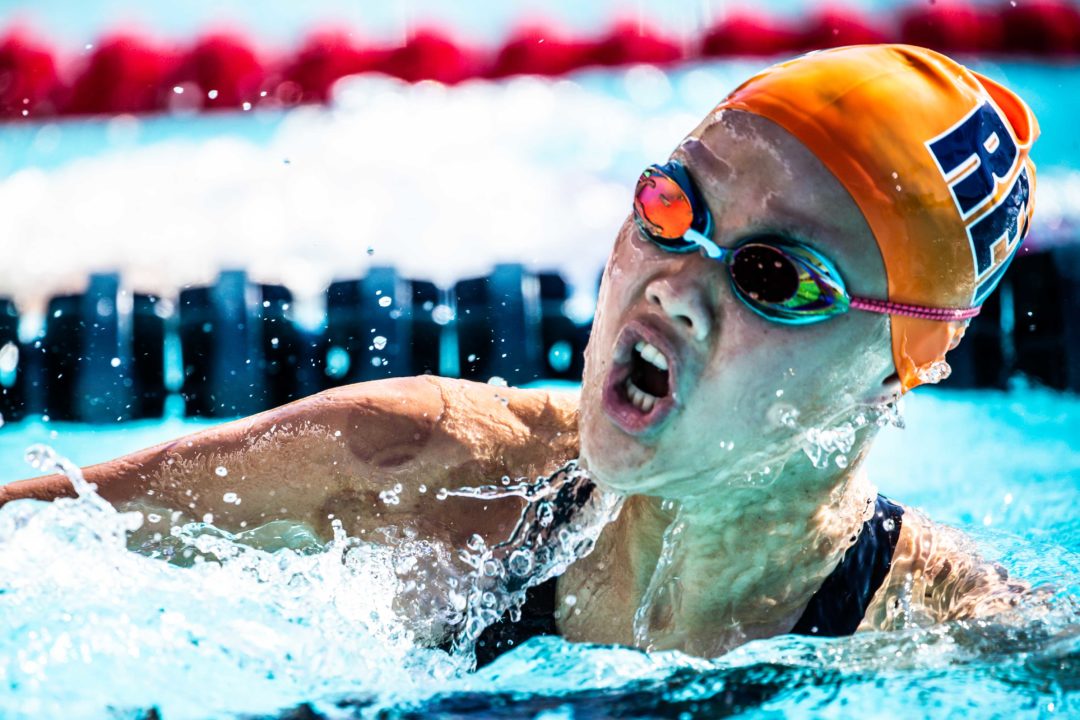 Notre Dame’s class is relatively small, but includes three top prospects with early NCAA scoring ability. Renee Gillilan heads to South Bend from Colorado, joining her older sister Coleen, an ACC A finalist in the 100 fly last year as a junior. With times of 52.9 and 1:56.7 in the butterfly races out of high school, the younger Gillilan is just tenths away from NCAA invite times.

Notre Dame did well in the state of Colorado, also getting 1:00.8/2:12.0 breaststroker Mary Codevilla to sign on for 2022. Codevilla is also a 1:59 IMer and should have a shot to jump on some medley relays early in her career.

The Wildcats assembled a massive class that should have a lot of impact on the relays and relay depth down the road. It’s possible that Kentucky just recruited three-quarters of its starting medley relay of the future. Lydia Hanlon is the backstroker (53.5/1:55.6), Denise Phelan the breaststroker (1:00.6/2:11.2) and Jordan Agliano the flyer (52.9/1:58.2). All three need some development to compete in the fast SEC (and the even faster NCAA), but Kentucky has generally done well with developing prospects.

The rest of the class has plenty of potential to fill in around the top three. Canadian flyer Breckin Gormley has been 1:00.5 in long course meters and is one to watch. 23-second sprinters Kaitlyn Golyski, Paige Taber, and Marin McKee could earn some free relay legs down the road.

Nationally, this is an elite class of high schoolers from the state of North Carolina, including the #1 and #2 overall recruits. UNC didn’t get either of those swimmers, but did assemble a really good class from a wide range of states, including two home-grown talents.

Emma Karam is a 52-second backstroker and Kyleigh Tankard a 52-second butterflyer. That builds a nice core to this recruiting class with some down-the-road relay potential. Nevada prospect Karam is also a strong 200 backstroker (1:54.5) who is only about a half-second off of NCAA invite level. Tankard is about a second and a half from invite level in the 200 fly (she’s 1:57.8).

In a good national class of distance swimmers, Michelle Morgan brings a 4:46.0 in the 500 free that should make her a potential NCAA qualifier early in her career. She’s also got enough speed to be 1:48.5 in the 200 free. Another endurance talent to watch is Aislin Farris, who is within a second of an NCAA invite time in the 400 IM at 4:12.2.

Ohio State’s class is on the small side, but when it comes to national-level impact, we’ll take two big-time NCAA scoring types over a really big class of more developmental swimmers. There’s also Harvard fifth-year transfer Felicia Pasadyn who should make an impact.

Lena Hentschel might turn out to be the true ringer of the class. The reigning Olympic bronze medalist in 3-meter synchronized diving, Hentschel heads to Ohio State amid a stellar international career representing Germany. We’d expect Hentschel to be an early NCAA qualifier with potential to score big in all four of her NCAA seasons.

On the swimming side, the Buckeyes mined distance standout Lucy Malys from rival territory in Michigan. Malys is 16:09 in the mile and 4:42.5 in the 500 free – both times that would have earned NCAA invites in 2022. She was one of the first names outside our top 20 recruits in the nation, and is also a very strong 400 IMer with a lifetime best of 4:13.6.

Elsewhere in the class, keep an eye on sub-2:00 IMer Jessica Eden who is dropping time fast.

Pasadyn placed 15th in the 400 IM at NCAAs last season and figures to be on the bubble of scoring at nationals once again.

doesn’t Pasadyn still have 2 years of eligibility yet? i may be mistaken

isn’t pasadyn only a 4th year technically? I thought she graduated Harvard in only 3 years

If you’re including transfers (which I believe you are), Ohio state brings in Felicia Pasadyn as well. Probably the biggest immediate impact in the class after a 3rd place 400 IM at summer nats.