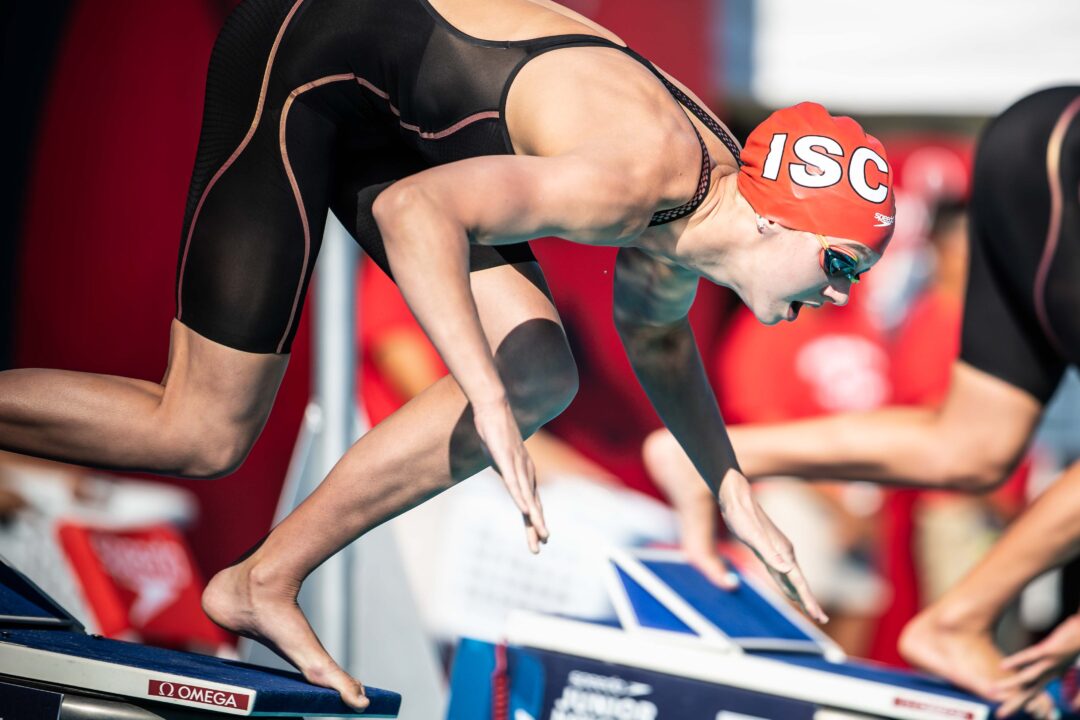 Louisville probably would have ranked higher in this class, but top-20 recruit Rye Ulett enrolled early and no longer counts as part of this incoming class after competing at the college level last season. Still, Louisville is a fringe top 10 team here, with 22.3/48.5 sprinter Ella Welch carrying a lot of the load. Welch is one of the better sprinters in this entire recruiting class, and should have lots of opportunity to contribute on relays from day 1.

At the other end of the spectrum, Paige Kuwata is a top-notch distance swimmer who is 4:43.8 and 16:11 in the 500 free and 1650 free, respectively, and on the cusp of NCAA invite times before even starting her college career.

Virginia high schooler Jordan Durocher is a 4:11.8 IMer and yet another swimmer in this class who could realistically earn an NCAA invite as a freshman with only a moderate time drop. (It took 4:11.6 to make NCAAs this past spring).

We’re starting to get into the class’s elite sprinters, now. Following Welch and Louisville, we’ve got #11-ranked recruit Kristina Paegle, a 1:45.0/48.0/22.3 freestyler who should be a great fit with an IU program that’s generally been good for 200 types. Paegle could very well make all of IU’s free relays as a freshman, and she’s already got an NCAA scoring time in the 100 free individually.

Like Paegle, Mya Dewitt stays within the Indiana borders to swim for her home-state college program. Dewitt is a backstroke speedster who made our “Best of the Rest” list just outside the top 20 recruits nationwide thanks to her lifetime-best of 52.8 in the 100 back. She can use a little more development as a 200 backstroker, but that kind of speed makes her an immediate-impact recruit who might be an instant upgrade on the front of IU’s medley relays.

This is a big and deep class. In addition to Paegle, the free relays get reinforcements from two international speedsters who are still developing their endurance. Canada’s Chiok Sze Yeo has been 26.0 in the long course 50 free, converting to roughly 22.8, while Germany’s Katharina Wrede is 25.6 in long course, converting to about 22.5.

In this Big Ten-heavy run of teams, you can see how competitive local recruiting is among college rivals. Where Ohio State got top distance talent Malys from within Michigan’s borders, Michigan managed to get ranked recruit Devon Kitchel away from her home state of Indiana. Kitchel is a really intriguing prospect with speed in all four strokes. That makes her 1:56.3 in the 200 IM her most intriguing time, but Kitchel is also 1:00.5 in breaststroke, 52.8 in fly, 22.9/49.7 in free and 54.2 in backstroke.

Kitchel and Crom could both boost relays in the future, and so could Riley Francis, more of a pure freestyler who has been 22.8/49.5/1:46.8 in her high school career. And just like Indiana and Louisville, Michigan gets some international sprint free talent, too. Canada’s Christey Liang has been 26.0/55.9/2:01.6 in long course freestyle, converting to roughly 22.8/49.3 in yards.

Throw in a pair of 53-second flyers in Brady Kendall and Ella Jo Piersma, plus a 49.7/1:47.3 freestyler in Malia Amuan, and this Michigan class could have a big impact across their four years at the college level.

Texas brings in two massive additions: Olympic champion breaststroker Lydia Jacoby and butterfly transfer Dakota Luther. Both are huge names on an international level and give Texas a ton of star power in this class.

Jacoby is the #3 recruit in the class, and there’s an argument to be made to rank her even higher. She’s as pure a breaststroker as there is without a true third NCAA event, but she’s also one of the best breaststrokers on the planet. Her short course times (58.8/2:08.6) by themselves are impressive, but she’s been so much faster in long course, that it’s fair to expect some big yards time drops in her freshman season.

Luther joins Texas after four years with the University of Georgia. She’s an elite 200 flyer who finished 4th at NCAAs last season while also scoring in the B final of the 100 fly. Because she only has one year of eligibility remaining, she doesn’t quite have the same pull in our ranks as a true freshman, but should still score plenty of points for Texas in her one season.

Sienna Schellenger brings key relay speed with a 22.7 in the 50 free and a 49.7 in the 100 free, and Texas kept her in the state. The Longhorns class is strong and deep, with a chance to score huge in year 1 and keep growing from there.

I feel like Texas should be ranked a little higher than 9 with just jacoby and Luther alone.

Not a large class for Michigan considering the retention issues… Bottom couldn’t grab that Big10 Championship with an Olympic gold medalist and multiple NCAA Champions on the roster. And he wasn’t able to retain them either. Those who stay will be???

Louisville’s Paige Kuwata is a huge stud. 16:27 in the 1500 Free, she tends to get overshadowed by her teammates Bella Sims and Katie Grimes, but she is an outstanding athlete. Huge Open Water star, and will be a great addition to the Cards!

Sherry loves driving the Paige Kuwata bandwagon. Is she a niece of yours?

there’s nothing wrong with what she said. She literally is saying all nice things about an athlete, what gives?

She has her “favorites” for sure!