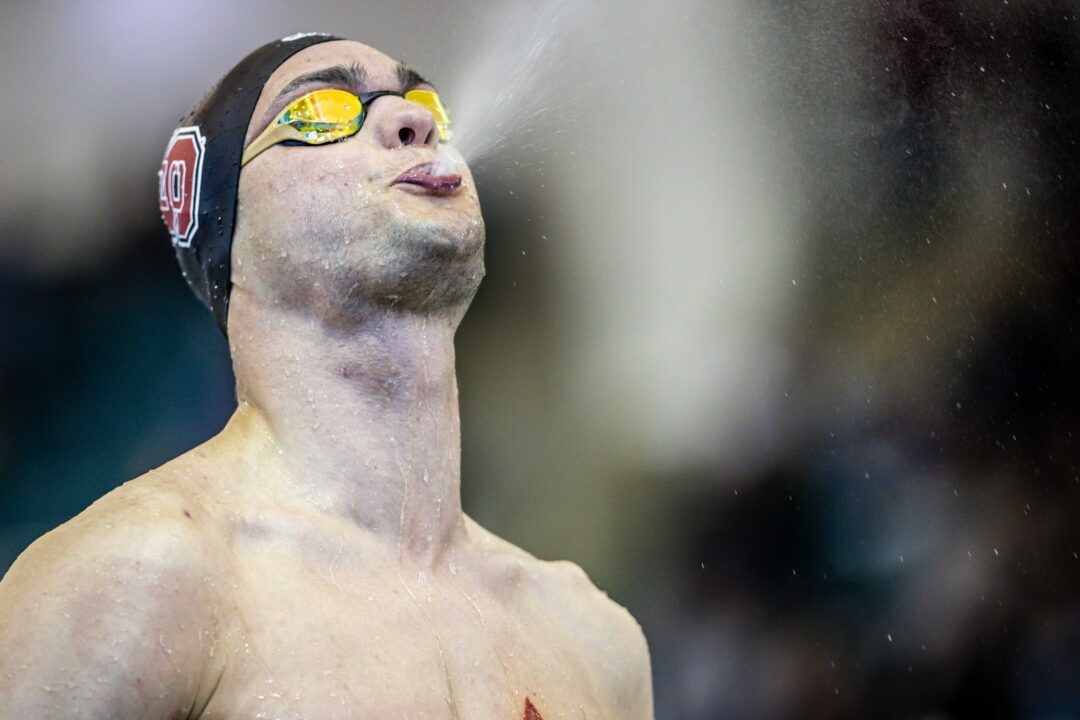 Once again, the depth of the NC State men was on full display as they rolled past Kentucky in their 2022-23 home opener.

Among that depth, Nyls Korstanje‘s performance in the 100 fly stood out. Swimming exhibition, the senior ripped a 44.95. That time would have placed 11th at last year’s NCAAs, where Korstanje finished fourth in 44.17. It’s a monster time for October, and stands up as one of the fastest times of the season. It’s also much faster than he was at this point last season; in October 2021, the Dutchman posted 46.41 and 46.24 in his two dual meets of the month.

The Wolfpack men also went 1-4 in back-to-back events. First, Luke Miller led the way in the 200 freestyle with a 1:34.78. He won by over two seconds ahead of his teammates Michael Cotter (1:36.81), Bartosz Piszczorowicz (1:37.56), and Sam Hoover (1:38.18). Miller holds a lifetime best of 1:31.16 from his fourth place finish at 2022 NCAAs. Half of the men’s 200 free ‘A’ final won’t return this season, including national champions Drew Kibler and Matt Sates. The event should still be a competitive one, and Miller is beginning to look like one of the prime candidates for the 2023 title.

Later in the meet, McCarty earned his second individual win with a 43.43 in the 100 freestyle. It’s still early, but the early returns for McCarty in Raleigh have been strong. In addition to his times here, he was just .09 seconds off his 50 free lifetime best with a 19.44 at NC State’s dual versus Tennessee.

For Kentucky, the highlight of the meet came in the first individual event. In just his second collegiate meet, freshman Levi Sandidge broke Kentucky’s school record in the 1000 free, hitting 8:57.81 to win the event. That brings the program record under 9 minutes for the first time, as the previous mark stood at 9:01.42, set by Adam Rosipal in 2021. It’s also a lifetime best for Sandidge, whose former best was a 8:58.77.

Junior Abby Arens put on a show in the women’s meet, capturing three individual event wins. She got started with a win in the 200 fly, posting a 1:55.65, only .23 seconds off her own pool record and winning by almost three seconds. Arens holds a lifetime best of 1:54.11 from 2022 ACCs, but this time is faster than the 1:56.20 she went at last year’s NCAAs. Had she gone her best, she would have landed in the ‘B’ final and ultimately 14th. Her early season speed is a good sign for the Pack, as they’ll need those points to stay competitive with a charging Alabama team. Last season in October, Arens put up a pair of 1:56-lows, so this is an improvement on those as well.

Just two events later, Arens was back, taking the win in the 100 free in 49.33. That led a sweep of the Wolfpack women’s own, as Abbey Webb and Katherine Helms took second and third. Finally, Arens won the 200 IM, clocking 1:58.35. She was the only woman in the field under the 2:00 mark.

The Kentucky women picked up two individual event wins on the day. They came in the back-to-back events of the 200 breast and 500 free. It was Gillian Davey who took the win in the breaststroke, posting 2:11.30 and touching almost a second ahead of Andrea Podmanikova. Then, it was Izzy Gati‘s turn to shine. Like the men’s race, the women’s 500 was quite competitive with the fifth-year Gati ultimately took the win in 4:50.31 ahead of Brooke Travis‘ 4:50.74. It’s a significant improvement on October 2021 for Gati, who went 4:56.64 this time last year.

NC State will take a break from dual meet action as their next meet is their annual invitational from November 17-19. The Wildcats face SEC foes Texas A&M for a dual on November 3rd.

My expectations for mid-season invitationals are sky high right now. Not just for Korstanje but everyone who’s ripped a great time in October. The worst part is I know it’s not fair for the swimmers to put that burden of expectations on them but I can’t help it. All this fast swimming so early on has got me drooling like one of Pavlov’s dogs.

What other teams are participating in the NC State midseason invite?

Finally putting some respect on Millers name, Wolfpack 50,100,200 looking amazing right now and if Dino’s track record indicates anything his d-group will be primed come taper.

Erika Pelaez according to instagram. But those 2 would be great also

Sorry for the edit making your reply confusing – initially asked Winkler or Diehl before realizing it was probably Pelaez. But Pelaez might mean Winkler too… can’t remember if the girlfriend rule was officially debunked or not

Let’s not overlook Curtiss’s 43.2 and 19.3 at the meet, quite honestly might be a standout swim, especially in the 100. Over two seconds faster than he was last year. Just something to notice.

Always fun to watch the Wolfpack! Standout meet for David Curtiss. He is a proven 50 swimmer and continued to show his worth with a 19.3. More promising was his 43.24 relay lead off. This is a whole 2 seconds faster than his swims last October.

We also got to see NCAA champion Kacper Stokowski do a 500 free in 4:20 where his splits clearly show inexperience.

I’d guess the reason Kacper’s splits were unique was because he’s not a 500 swimmer.

Berkoff has mono. Going around the team 😢

Thanks for the HIPAA violation Snarky, Swimswam please take private medical info down!

I don’t think HIPAA means what you think it means…

Also, I know who Snarky is. Snarky is most definitely not bound by HIPAA.

One would assume it would be in SWIMSWAM’s best interest to protect an individuals sensitive health information from being disclosed without the individuals consent. If SWISWAM has that consent, I guess we are all good then.

HIPAA applies to covered entities. Neither SwimSwam nor I fall under the purview of HIPPA. Read the law before you rant about its violation.