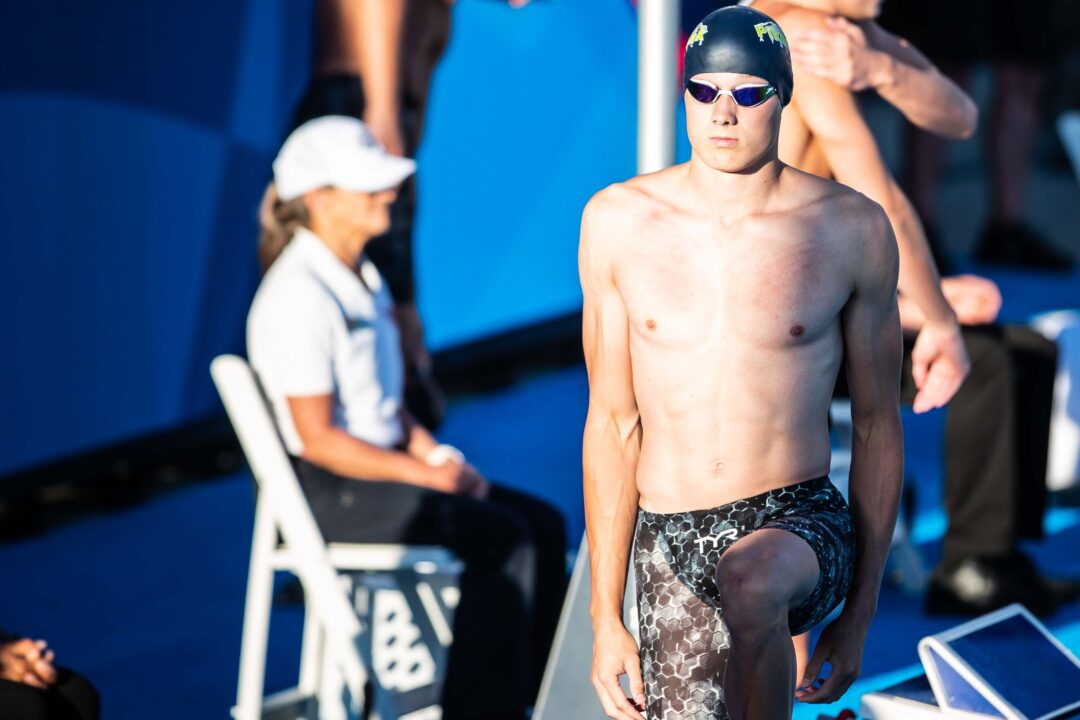 Quintin McCarty, one of the fastest freshman sprinters in the NCAA, went 19.44 in the 50 free unsuited and was just 0.09 seconds off of his personal best. Archive photo via Jack Spitser/Spitser Photography

Both teams appeared to be unsuited at this meet.

Things kicked off with a extremely close battle in the 400 medley relay, with Kacper Stokowski (45.71), Giovanni Izzo (54.27), Nyls Korstanje (45.65), and Luke Miller (42.87) of NC State out-touching Tennessee’s Harrison Lierz, Jarel Dillard, Jordan Crooks, and Gui Caribe by 0.01 of a second in 3:08.50. Tennessee’s splits were not properly recorded due to a timing error, but Caribe appeared to have anchored in 41.96. And while we do not have official data on how many unsuited sub-42 splits there have been, they are extremely rare, and it’s extremely impressive that Caribe was able to record one in October as a freshman (if the timing is correct). Other sub-42 unsuited freestyle relay splits that have occurred in recent memory include Danny Krueger‘s 41.85 from the UVA-Texas dual meet last season and Nathan Adrian‘s 41.51 from 2011.

The decision to put Izzo, who is primarily a sprint freestyler/backstroker and IMer, on breastsroke was an interesting one. NC State is coming off of the loss of Rafael Kusto, their primary medley relay breaststroker from last year, and their use of Izzo this meet indicates that he could be a potential replacement for Kusto.

NC State’s winning time of 3:08.50 is a little over a second slower than Texas’s time of 3:07.25, which was set suited last week at the SMU Classic. Notably, Stokowski and Korstanje’s back and fly times respectively were fast than any of the back and fly medley relay splits from the SMU Classic. In addition,  Quintin McCarty and Aiden Hayes had formidable back and fly times of 46.80 and 46.83 respectively on NC State’s ‘B’ relay. McCarty was just 0.35 off his best 100 back time of 46.55.

The 1000 free was topped by NC State’s distance duo of Will Gallant and Ross Dant, who went 1-2 with times of 9:00.98 and 9:04.85 respectively. Gallant’s time is second in the nation for bona fide competition, with only Alec Enyeart‘s time of 8:50.62 from last week being faster.

Next up was the 50 free, where there was an extremely tight and fast race. Crooks (19.36), McCarty (19.44), NC State’s David Curtiss (19.45), and Korstanje (19.58) all dipped under 20 seconds, and were the top four by a significant margin. Crooks’ time ties his 19.36 set two weeks ago at a dual meet against UNC Wilmington as the second-fastest time set this year in bona fide competition, with only Cal’s Bjorn Seeliger having been faster at 19.29. McCarty, Curtiss, and Korstanje’s time rank fourth, fifth, and sixth respectively. McCarty, who is the top ranked freshman sprint freestyler in the nation, notably posted a time that was just 0.09 seconds off his best time of 19.33 set at 2021 Speedo Winter Juniors.

Caribe backed up his relay split with an individual win in the 100 free, clocking a 43.36 and shaving 0.5 seconds off his previous best time of 43.86 set at the Tennessee vs. UNCW dual meet. He held off NC State’s Luke Miller and Sam Hoover, who went 43.64 and 43.97 respectively.

In the 200 breast, Tennessee’s Jarel Dillard won with a time of 1:56.56, grabbing the third win of the day for the Volunteers in the last individual event.

Notable absences from this meet were NC State’s Noah Henderson, Hunter Tapp, Owen Lloyd, and Mikey Moore, who are all NCAA qualifiers.

One notable swimmer not racing on the women’s side of the meet was Tennessee’s Julia Mrozinski. Although she has been seen training/on deck in various social media posts and Tennessee confirms that she will be competing this season, she has yet to swim in a meet, having missed the Tennessee vs. UNCW dual meet as well. Jasmine Rumley, Tennessee’s fastest sprint freestyler, is also not competing at this meet after also missing the UNCW meet.

Do we know the fastest freshman debut time in history the 50?

But once the USA Swimming databases are back up and running, I can probably figure it out.

Those are big losses for the Lady Vols. Also appears that NC State is without 4 of their male NCAA qualifiers in Mikey Moore, Noah Henderson, Hunter Tapp and Owen Lloyd. Incredible depth for NC State. Although I did honestly just quickly glance thru results, so they may have swum, or swimming today.

Rumley missed meets last year and now has missed the first two competitions this year. What is up with her?

I apologize to the NCSTATE men. I predicted the MAN vOLS would step up and win. State swam great.

That Nathan Adrian 400 split is an all-time classic obscure swimming video. 41.5 in the rain at a dual meet unsuited, absolutely insane

Any chance you’ve got a link to said video? Searching “Nathan Adrian 2011” only brings up NCAA champs for me.

I have it linked in the article.

10
0
Reply
poolboy
Reply to  Some Guy

It’s incredible Austin Staab held him off that last 25 despite Adrian’s 19.2 opening split

Staab criminally overlooked as one of the all time greats in scy.

I’ll remain cautious and not go as far as to say NC State will win NC’s just yet, but there’s been such a build up of talent and top tier performances that I feel like they’re going to explode soon

Agreed. They aren’t gonna be in contention to win NCAAs until they fix their gaping hole in breaststroke/IM, but their depth in freestyle and their strong freshman class are hard to ignore right now.

Aside from *maybe* Caribe’s 41.9, Quintin McCarty getting THIS close to his 50 free PB unsuited in October as a freshman was arguably the most impressive performance from tonight in my opinion. I think he can go 18 come championship season, and if he does, he’s gonna be alongside Korstanje, Curtiss, Henderson in the list of NCST swimmers who have been 18-point flat start. That’s a scary looking 200 free relay, and it doesn’t even account for the numerous other strong sprinters they have down their… Read more »

The breaststroke fix is coming in two years…

Are you talking about Will Heck? He’s coming in one year but yeah. It’s hard to predict how much he’s gonna drop from now but he has potential for sure.

Nope, not who I’m referencing.