Stanford Goes 32-for-32 in Season-Opening Sweep of Utah 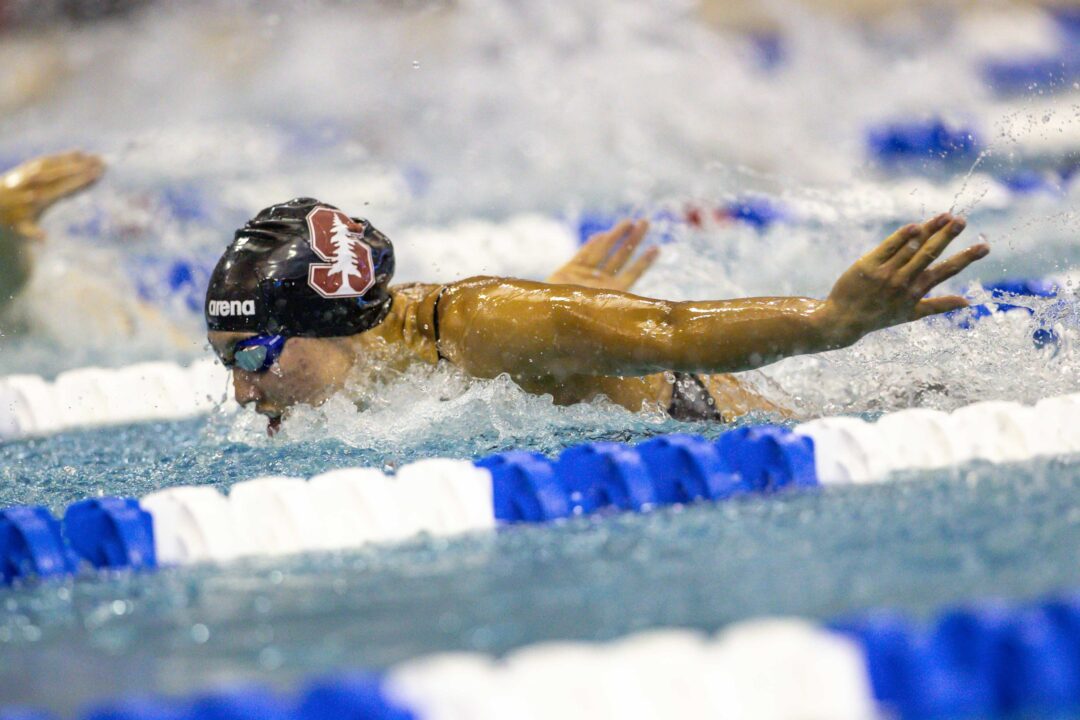 Torri Huske put her versatility on display against Utah, winning the 100 back and 200 breast as Stanford rolled past Utah in their season opener.

In their first meet of the season, Stanford put up a dominant performance against Pac-12 foe Utah. Both the women’s and men’s teams won all sixteen events, including nine where the Cardinal went 1-2-3. Multiple freshmen, including Olympian Claire Curzan, earned their first collegiate wins as got their 2022-23 season underway.

It’s been an eventful summer for the Stanford women. Torri Huske continued to impress at the international level, setting a new American record in the 100-meter fly en route to Worlds gold. Olympian and NCAA champion Regan Smith announced she was turning pro after just one season with the Cardinal and moving to train with Bob Bowman at ASU. On top of that, Stanford had a monster recruiting class arrive on campus, including Olympic and Worlds medalist Claire Curzan. It’s a deep enough group behind Curzan that even with Smith’s departure, they’re still a huge threat to reclaim their NCAA runner-up trophy.

They looked strong in their season debut, as freshmen and returners alike stepped up in their “off” events to easily take the win. Emma Wheal and Huske led the way as the double-event winners. Huske showcased her versatility, first winning the 100 back in 52.62, .02 ahead of Curzan. She followed that up by touching first in the 200 breast in 2:14.65. In addition to her individual wins, she anchored the 200 medley relay in 22.44 and split 49.30 on the 400 free relay.

One of the most encouraging signs for the Cardinal was that in addition to their freshmen’s stellar debut, many of their returners were much faster this year than they were this time last year — even with swimmers who didn’t place as highly in their event as they did in 2021. Lillie Nordmann won the 200 fly last year in 2:01.57, and though she finished second this year, posted a 2:00.49 to be over a second faster than her 2021 self.

More dramatically, Samantha Tadder took second this year in the 200 breast with a 2:13.99, over six seconds faster than she was last year.

It was a tough day out for Utah on the trail end of a brutal back-to-back against Cal and Stanford. They ended up without an event win; however, they did capture second and third in the 1000 freestyle, thanks to Molly Jacobsen (10:13.24) and Cameron Daniell (10:15.27). First-year head coach Jonas Persson spoke on the resiliency of his swimmers post-meet, saying “we swam a lot faster than we did last year.” He continued, “we had a much better attitude than we did last year…[the swimmers] are able to bounce back from poor swims, which in itself is very impressive.”

There were several notable absences on the men’s side, including defending 100 fly national champion Andrei Minakov. Zhier Fan, Rick Mihm, Will Tarvestad and two divers — Peyton Donald and Hunter Hollenbeck — also did not compete. Head coach Dan Schemmel told SwimSwam that the team’s had a run of sickness and some injuries through the early part of the season but that he expects all to compete this season.

In spite of the many absences, the Cardinal men had no trouble taking the win. They had four double event winners, highlighted by freshman Hayden Kwan sweeping the backstroke events. In his individual event debut, Kwan stopped the clock at 48.23, already just .24 seconds off his two-year old personal best. He followed that up with a win in the 200 back in 1:45.48.

Other double event winners included Luke Maurer (50 free, 100 free), Ron Polonsky (200 fly, 200 IM), and Ethan Dang (100 breast, 200 breast). Dang’s event wins were especially noteworthy because of his improvement trajectory. He swept the breaststrokes against Utah last year too and this year, he was markedly faster.

Dang, a junior, has yet to set a personal best while at Stanford, but this improvement trajectory could be a sign of things to come.

At the national level, the Cardinal are rapidly improving, but one of the areas they need to improve in order to maintain their place in the NCAA standings is depth. Here, their depth was on full display: in addition to winning every event they also went 1-2-3 in four individual events.

Impressively, at least one freshman factored into every “podium sweep.” They got started in the 1000 free, with Liam Custer and Henry Morrissey taking second and third behind junior Preston Forst. Rafael Gu won the next event, the 200 freestyle in 1:35.77, notching another freshman win. He then took second in the 100 freestyle, sandwiched between Maurer and classmate Andres Dupont.

It’s early and Utah was not exactly a challenging opponent, but it’s a good sign for the Stanford men that despite high-profile absences, they can rely on their stellar freshmen class and improving returners to get the job done.

The Utah men were in much the same position as the women. Still, they put up solid second place finishes as they wrapped up their California trip. Jaek Horner earned second in both breaststroke events, posting 55.76 in the 100 and 2:03.80 in the 200. Fifth-year Andrei Ungur took second in the 100 back in 48.27, only .04 away from giving Utah an event win. Later, he took third in the 200 back behind Stanford freshmen Kwan and Josh Zuchowski.

Stanford will host their alumni meet next Friday, Oct. 21st. They’ll be back to intercollegiate competition on Nov. 4th, with the women at San Jose State and the men at Cal’s Triple Distance Meet.

Utah’s women are back in action on Oct. 28th against UCLA before playing host to UNLV with the men’s team on Nov. 4th.

You’re obsessed with her, so weird

Very nice wsummary. Fun to read about the progress of the Card! Thank you!