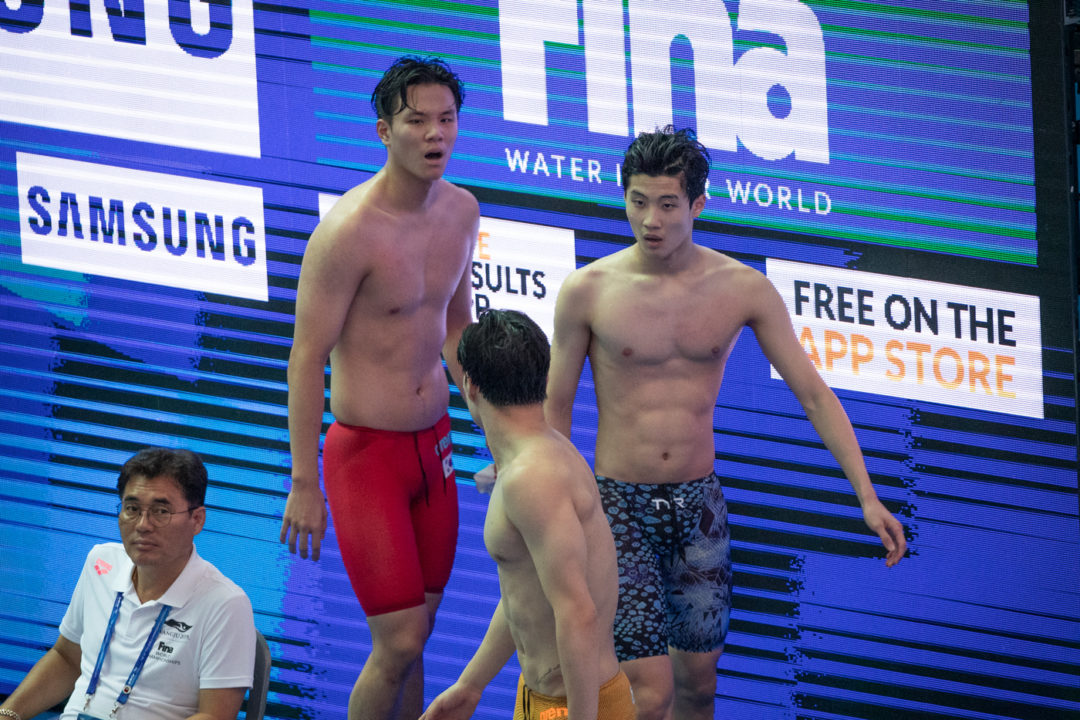 Teen standout Hwang Sun-woo has been selected as one of South Korea's flag-bearers for the 2020 opening ceremony that will take place on Friday, July 23. Archive photo via Rafael Domeyko

Hwang Sun-woo was selected as one of South Korea’s flag-bearers for the 2020 Olympics that are scheduled to begin in less than a week. The teen swimmer will carry the flag for the men’s team while volleyball player Kim Yeon-koung will carry it on the women’s side.

Hwang is the first swimmer in the country’s history to lead the team at the opening ceremony.

Hwang looks to be the country’s swimmer that is most likely to win a medal at the Games. At the Korean National Trials in May, he broke his own World Junior Record in the 200 free, going a 1:44.96. He dropped 0.96 seconds from his previous time to be the first teenager this year to go sub-1:45. This time makes him the fifth-fastest swimmer going into the 2020 Olympic Games. He sits behind Duncan Scott, Tom Dean, Katsuhiro Matsumoto, and Martin Malyutin and only one second separates the top 8 swimmers. It will be a tight race for the gold medal.

South Korea’s decision to name Hwang as a flag-bearer could indicate the high expectations they have for him. As the country’s highest-ranked swimmer, he is already a team favorite. In previous years, the country has selected athletes who have seen success in international competition. In 2016, fencer Gu Bon-gil led the team in the opening ceremony. He is a three-time world champion, seven-time team Asian champion, six-time individual Asian champion, and a 2012 London Olympic champion.

The country looks forward to bringing home swimming medals after coming home empty-handed in 2016. Former Olympic champion Park Tae Hwan failed to perform after coming back from a doping suspension. He was the last swimmer to win medals at the Olympic games, earning two silver medals in London.

In 2016, South Korea picked up 21 medals at the 2016 Rio Olympic Games. The country dominated the field in archery, bringing home gold medals in all four of the events. The women and men both won the individual and team titles.

The Tokyo Olympics is the first time that countries have been allowed to nominate two athletes – one female and one male – to carry the flag in the parade. Until now, every country has been allowed one flag-bearer, although in 1980 Australia selected two athletes to do the job. Swimmer Max Metzker co-carried the flag with track and field athlete Denise Robertson-Boyd to protest the Soviet Union’s invasion of Afghanistan. Since then, no other country has selected two athletes to lead the team during the opening ceremony.

There are now 17 swimmers selected as flag-bearers for the opening ceremonies:

I’ve never understood why a country would select a swimmer who’s competing just a couple days later to lug a heavy flagpole around a track. Yes, it’s an honor, but it can’t possibly help his performance.

During the ’96 Opening Ceremonies when Janet Evans had to run up that ramp to hand off the torch to Muhammad Ali, I remember thinking “…but…. but…. what about her TAPER?!”

I remember getting yelled at by my coach for laughing too ‘hard’ with my teammates heading to the locker room during a taper.

Of course it wasn’t the Olympics….. ….but emotional scars ya know?…. 😀

You can dismiss the concern, but swimmers have talked about being drained from taking part in the opening ceremonies. The event is made for television, so there’s hours of standing around before you get the chance to walk anywhere. As the flag bearer, it’s probably harder to just sit down, lest the flag be on the ground as well. The best point going in his favor is his youth, so hopefully it won’t affect his racing.

No pressure for the young bloke then.

Seems like a strange choice even if he is a big talent.

He’s an outstanding talent but I believe the flag bearer should be someone who has a history at the Olympics and has represented their country with distinction. Doesn’t South Korea have anyone who fits this bill?