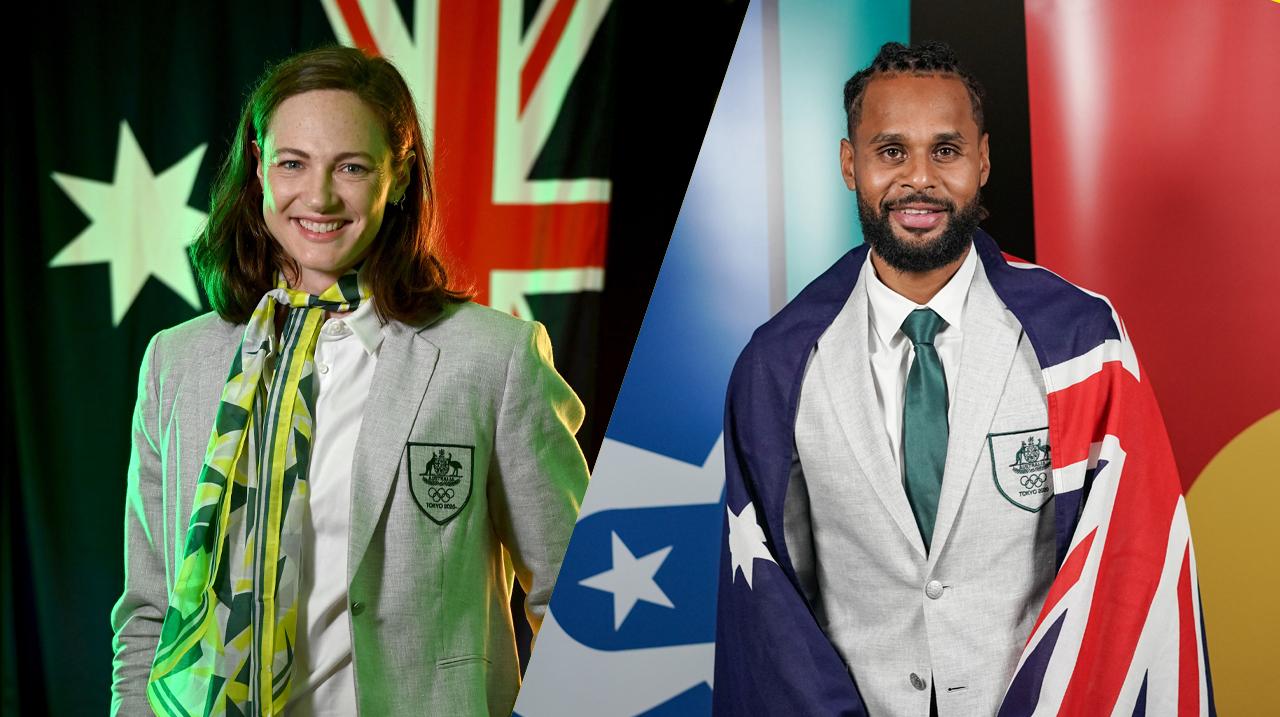 Five-time Olympic medalist Cate Campbell has been named one of Australia’s two flag bearers for the Opening Ceremonies at the Tokyo Olympic Games, as the freestyle sprinter will be joined by basketballer Patty Mills.

Campbell, who will make her fourth straight Olympic appearance for Australia in Tokyo, becomes the country’s first female swimmer to carry the flag, while Mills will be the first Indigenous Australian to do so.

This year marks the first time the International Olympic Committee (IOC) has decreed that one male and one female athlete carry the flag of each nation at the Opening Ceremonies.

However, this won’t be the first time Australia has had dual flag bearers, as distance swimmer Max Metzker and track and field athlete Denise Boyd jointly carried the flag at the 1980 Olympics in Moscow after 23 countries withdrew from the Games following the Russian invasion into Afghanistan.

Campbell won a pair of bronze medals in her Olympic debut at the Beijing Games in 2008, taking third in both the women’s 50 freestyle and 400 free relay at just 16 years of age. The now-29-year-old then won gold at the 2012 Games in London in the 400 free relay, and added two more medals, a gold and a silver, in Rio in the 400 free and 400 medley relays, respectively.

Like Campbell, Mills will represent Australia for a fourth time in Tokyo, having made his Olympic debut in 2008. The 12-year NBA veteran has spent the past 10 seasons playing for the San Antonio Spurs, including winning a league title with the club in 2014.

Campbell is the 10th swimmer expected to carry their nation’s flag in Tokyo:

Happy for Laszlo ! He deserves it for his final olympics!!

Regarding lighting the torch in 2028 I guess Michael Jordan would be under heavy consideration also, especially since Los Angeles 1984 was his coming out party as a true superstar no longer leashed by the North Carolina system. It depends on whether they want to use Phelps since he’s associated with Olympic greatness, or repeat the Ali 1996 route with Jordan…someone who was great in the Olympics but rose to worldwide fame later. Maybe they could do it together. I think they are friends who really respect each other

It will be Simone in an electric Uber Eats Tesla.

For those who don’t understand why Cate would do this because she swims the next day aus won’t put her in the heats of the 400 free relay when their 3-6 swimmers can guarantee them a finals spot, they will rest their best two swimmers for the final with the fastest two from the heats so she will have a two day rest

Ledecky could easily have a similar assignment in Los Angeles 2028, whether or not she is still competing. The only issue there is that Phelps is probably the favorite to light the torch. They may not want to have a swimmer touching off to another swimmer. Ashton Eaton and Allyson Felix will be in contention for a late role. Winter Olympians will also be in the mix, like Shaun White

This can’t possibly help her performance.

Why would it make a difference?

Yanks are desperate for Cate to struggle…..

She’s not going to struggle.

It is very unusual to select a Day1 – Day 2 athlete for Opening Ceremony duties….( I thought Ash Barty might get the role, but she is up on Day1 as well).but good for her!

Them being able to attend the opening ceremony is about the only good thing about morning finals.

There’s plenty of time between the opening ceremony and the 4×100 free final because of morning finals.

I think quite the opposite actually. C1 has gone into the past 2 Olympics with the pressure of 23Million Australians to win Gold. Our media is so brutal to our favourites. Finally, C1 is entering the Olympics under the radar (from the Australian media) due to the rise of Titmus and McKeown. She now has no pressure, a world of experience, and is actually being celebrated in the media/dolphins team. I can see some huge performances coming from C1 in her final Olympic Games

The Australians are well known for epic choke jobs.

Never has so many Aussie trolls been silenced at the Summer Olympics.

So what happened at your recent trials then?

that is, as you would say, ancient history

When was the last time Cate Campbell won gold in the women’s 100 meter freestyle at the FINA World Aquatics Championships?

You are obsessed with this moment. I don’t understand it.

Susie was undefeated in 6 years, the defending champion and had just broken the most superhuman record on the books. She’d won the 200 free and was at a home Olympics of which she was the golden girl.

She was the humblest of champions and was gracious in defeat having gone down to a swimmer who produced the swim of her life.

Your delight in marinading in the shadenfraude is really odd.

also hilarious how they can claim that someone who had already won 2 individual olympic golds is a choker. everyone loses at some point. since you’re perpetually talking about o’neill’s 200 fly, please talk about how much of a failure rebecca soni is because of her idiodic pacing of her 200 breast in 2009 (bigger piano than c1 in rio), or dana vollmer for missing the beijing team, or allison schmitt for only winning one individual medal outside of london (silver in 2009) and missing every team between london and rio despite her being american record holder to this day, or nathan adrian for only ever winning one international gold and never improving on his london time

What other Summer Olympics events/sports is the Australian media so brutal?

Association football, also known as football or soccer, is the world’s game.

In all honesty, Olympics aren’t nearly the “big thing” in AUS they once were, both in media sense and public interest. AUS TV ratings for recent Games are a fraction of what they once were, thus significant loss generators for rights holders. AUS sports media will probably still remain more focussed on the domestic football leagues. Whilst a few swimmers may/may not snag a short term commercial deal; they really aren’t particularly high profile.

You are right, the Aus sports media likes winners hence the domestic football leagues where we are best in the world in AFL & NRL. I’m sure someone has broken Covid rules or made a nasty comment about our indigenous people in those sports to cover our sports media.
I’ll be watching the Mathilda’s & Sam Kerr & the Olyroos at the Olympics.

I’m a “bad” Australian cos I can’t stand AFL and NRL and cricket is like watching paint dry.

I’m with you, I love Australia competing internationally, hence swimming. Just this week I love following 2 Aussie girls to 1/4s of Wimbledon, 2 Aussie golfers winning, one the Irish open & then the other in the USA, a PGA event & also a Cyclist winning a stage of the Tour de France.
Much better then the Suburban AFL or the State of Origin between the same 2 states every year Yawn.

I’m still sufficiently a South African to support them in cricket and rugby …….and whoever’s playing against AUS (esp the Wallabies). I’m actually far more likely to support AUS in women’s sport than men’s (far less $$$ and media attention yet often outperform). NRL lost me at the end of the 90s. My real favourite sport these days is pro cycling (not just TDF but all the other great races). I was a major fan of the Matildas until they/Football AUS shot themselves in the foot with coaches about 2-3 years back. At that point, they were top 5 in the world and beating the best; sadly now they’re just a rabble with a defence that is Lampoon Movie material

Football in Australia has a habit of shooting themselves in the foot over & over again & the coaching debacle was just a joke.
However, women’s football has taken off in recent years, especially in Europe & hence we missed our big chances to win something big. Hence why the goals being let in, European teams now very good..

I think nowadays cricket is the most popular sport in Australia.
As there are many T20 leagues are initiating around the world, it seems to be very lucrative too.
And the media attention seems to get higher and higher with the historical whereabouts and constant improvement of the sport and its entertainment features.

Actually I’m from Sri Lanka, and did my Bachelors and Masters in Australia.
So i used to go to Sri Lanka vs Australia matches at MCG. It’s like Carnival atmosphere. Also went to many big bash matches specially for the Melbourne Derby. Those times were awesome.

I’d disagree with that statement. It certainly retains a very high media profile but crowds have been decreasing in recent years. Furthermore, its grassroots have contracted immensely. Maybe 30-40 years ago, it was a popular boys sport but its now more a game for private school students rather than mass participation. Grounds that I played on as an ‘age cricketer’ have been lost to other sports. It HAS seen significant growth on the girls/womens side but the male talent pool continues to contract …. as has been the case with Olympic sports like swimming.

Well. I kinda disagree. I don’t much about past (20 year ago). I was there for 8 years. And ofc, as subcontinent ppl we always care about cricket. I played some club cricket there.
Anyway , i saw huge enthusiasm from mass crowds about cricket in recent past. Crowd is always there for test cricket. Recently, we saw Boxing day test matches attracting 100,000 crowd to the grounds (Gabba).
Then Big bash elevated the entertainment and commercial aspect of the game to an another level. I was there in Melbourne Derby 4 year ago, where we had full crowd at MCG (more than 90,000). I don’t know much about grassroot level. But i guess still we see lots… Read more »

No trying out fancy French stuff. .

What were the television ratings for the 2018 FIFA World Cup and 2019 FIFA Women’s World Cup in Australia?

Something like this would jazz things up: (a classic from the past):

Not sure how she gets selected over Emily Seebohm

Em would have been a great choice too. I’m guessing it’s because Cate got a gold and a silver in Rio while Em only got a silver, and Cate is expected to individual medal while Em probably isn’t? Although Em has more Olympic medals overall.

You are correct, but with heats not starting until 24 hours after the opening ceremony, it opened up an opportunity. Also, Cate may not swim the heats of the 4×100 free plus I don’t think the ceremony will be as long due to covid and lack of crowds.

Opening. Closing flag bearers are usually not announced until at the Games. Since athletes are being asked to leave when they’re done competing…probably won’t be many swimmers at closing.