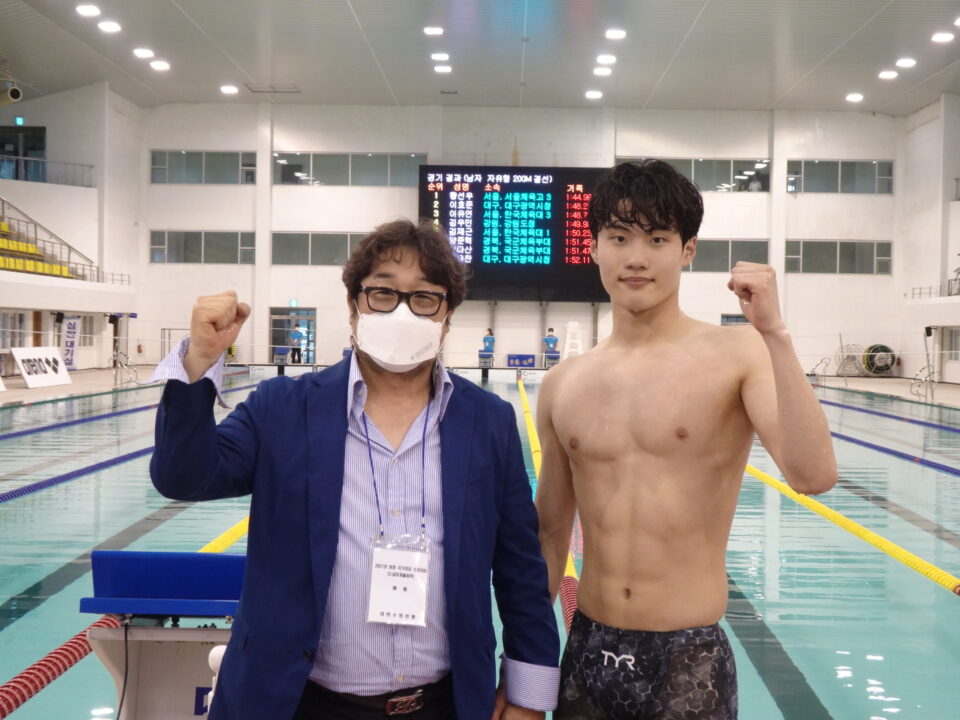 As if hitting a new lifetime best and Korean national record of 48.04 in the 100m freestyle yesterday wasn’t enough, 18-year-old Hwang Sunwoo followed up with a new World Junior Record in the men’s 200m freestyle.

Competing on the penultimate day of action at these 2021 Korean National Trials, Hwang blasted a new lifetime best of 1:44.96 to take 200m free gold.

That not only once again easily cleared the FINA ‘A’ cut of 1:47.02 needed to qualify for the Tokyo Olympic Games, but his outing crushed his own previous World Junior Record of 1:45.92. That result was posted just last November, meaning the teenager managed to hack almost a full second off of his already impressive time in just a matter of months.

Splits for his previous WJR included 51.78/54.14, while this time around the man opened in 50.74 and closed in 54.22 to make history by joining the 1:44 club. He’s now the 16th fastest 200m freestyle performer all-time and the 4th fastest Asian man in history. For additional perspective, Hwang’s time here would have garnered the silver medal at the 2016 Olympic Games in Rio.

After his remarkable swim, Hwang said, “I’m quite happy to drop almost a full second in only 6 months. All three turns felt right so I had a good feeling about it.”

Hello sir, welcome to the 1:44 club! The air gets pretty rarified up there! Congrats!!

And we have the euros starting Monday!!

31
0
Reply
Bill Swims After His Horses

This young man has a bright future.

Years of waiting, now the 1.44s are coming on strong. Starting to think we might get a 1.43 for gold in Tokyo.

Gosh I hope so, after Agnel its been stale

Throw in Rapsys, Sun (🤢), hopefully an American and an Aussie… Perhaps one of the young Russians… Semis in Tokyo are going to be BRUTAL.

A good number of the expected finalists will probably have to take it easy because they have the 4×1 relay, so the times may not be that fast. Someone from a non-relay country like Rapsys to Hwang could take the opportunity to blast something fast to keep everyone else on their toes though.

Legend in the making?

Dude is built like a torpedo. Congratulations on such a fine effort.