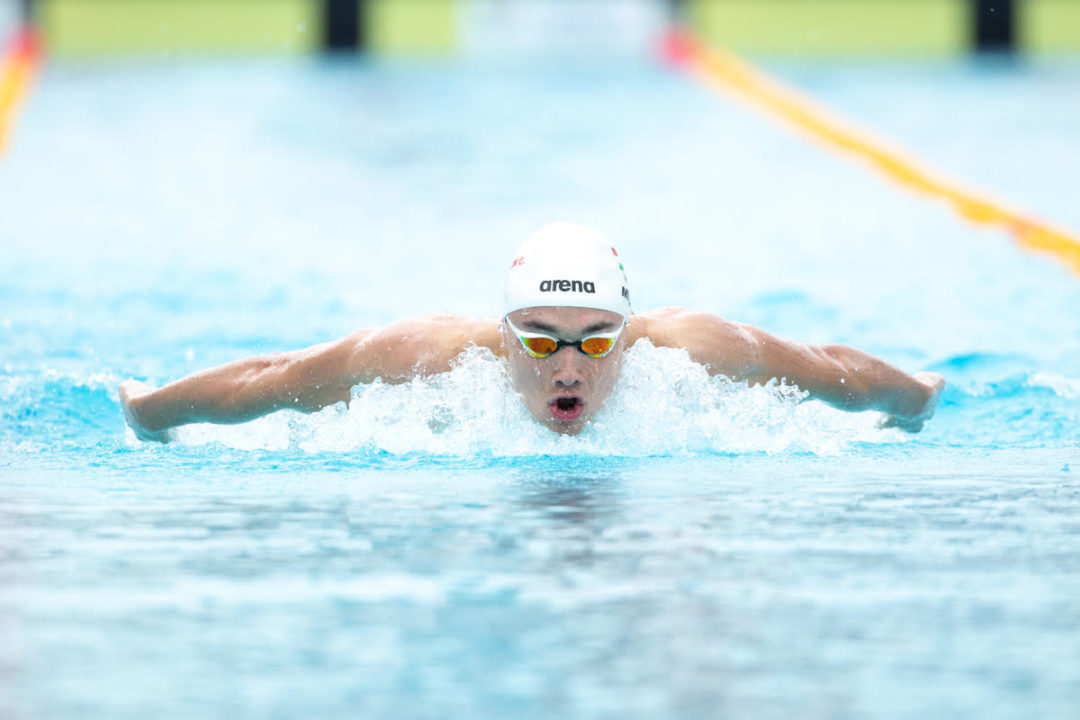 Michael Phelps was the face of 2000s/2010s men’s 200 fly, yet who is the new face of the men’s 200 fly? A few new faces popped up during the 2010s alongside Phelps, including 2012 Olympic event champion Chad le Clos and multi-time Olympic medalist Laszlo Cseh. Yet in the last two years, the world was introduced to two rising teenagers, Hungarian Kristof Milak and American Luca Urlando, that immediately inserted themselves into the conversation. Likewise, Japan has produced 3 of the top 8 swimmers in the men’s 200 fly this Olympic cycle, compromised of versatile star Daiya Seto, 2016 Olympic event runner-up Masato Sakai, and 2019 World University Games event runner-up Nao Horomura. Hungarians Cseh and Milak are also joined by countryman and 2016 Olympic bronze medalist Tamas Kenderesi in the 2019-2020 world top 8.

During the late 90s/early 00s, Tom Malchow was the new American face of the 200 fly, following predecessors Mark Spitz/Mike Bruner (70s), Craig Beardsley/Pablo Morales (80s), and Mel Stewart (early 90s). At the international level, German Michael Gross was a dominant 200 flyer during the 1980s, holding the world record from 1985-1991. Yet in 1995, Russian Denis Pankratov chopped half a second off Stewart’s 4-year-old world record with a 1:55.22, inching closer towards the 1:54-mark. One year later at the 1996 Atlanta Olympics, Pankratov sealed the Olympic title, defeating Malchow on American soil. Four years later at the 2000 Sydney Olympic final, Pankratov led the field for the first 150 meters, looking to repeat his 1996 Olympic title. However, Pankratov slowed as Malchow accelerated, earning a redemptive Olympic title after his silver medal in Atlanta.

During the 2000 Olympic final, 15-year-old Michael Phelps had swum his first Olympic final, placing 5th. One year later at the 2001 U.S. Spring Championships, the G.O.A.T. began his 18-year-long 200 fly world record reign. Fast forward 15 years later, Phelps still owned the 200 fly. But who else accompanied Phelps during the 2000s/2010s before his 2016 retirement? The answer is, not many, but there is a number.

Japan’s Takeshi Yamamoto took silver behind Phelps at both the 2003 World and 2004 Olympic finals. Hungarian BK/IM specialist Laszlo Cseh later joined in on the fly events during the late 2000s/early 2010s, becoming a very recognized face to see on an international men’s 200 fly podium. Japan’s Takeshi Matsuda also earned double Olympic bronze from both the 2008 and 2012 Olympic finals. At the 2012 London Olympic final, Michael Phelps was looking to three-peat his signature event while young South African Chad le Clos was about to compete in the biggest race of his career next to his idol. Phelps was leading the race, until an eager le Clos fought all the way to the end to secure a surprise Olympic title.

From 2013-2015, Chad le Clos became the new face of the men’s 200 fly after de-throning Phelps in London, or so we thought. After winning the 2012 Olympic title, le Clos followed up with his first 200 fly World title in 2013. In 2014, Phelps made his swimming comeback, yet became ineligible for the 2015 World Championships. While Phelps would not be at the 2015 Worlds, Laszlo Cseh was fnot done with swimming yet. The 2015 final looked to be le Clos’ to lose for the first 150 meters, until the veteran (Cseh) claimed his first-ever 200 fly world title and second career world title (400 IM, 2005).

During the 2016 Olympics, Phelps came back and won the 200 fly Olympic title one last time. However, next to Phelps on the 2016 podium were two new faces: Japanese Masato Sakai and Hungarian Tamas Kenderesi. One year later at the 2017 World Championships, le Clos claimed another 200 fly World title, outshining Cseh and versatile Japanese star Daiya Seto. However, Sakai and Kenderesi were not able to repeat their medal performances from 2016.

Entering the 2017-2018 season, le Clos already had 2 World titles and the 2012 Olympic title under his belt. Yet by the end of the season, le Clos’ own season best was not good enough to reach #1 in the World rankings. Reaching the top of the rankings were a pair of two rising teenagers, Hungarian Kristof Milak and Japanese Nao Horomura.

After picking up a surprise 100 fly silver medal at the 2017 World Championships, teen Kristof Milak exploded at the 2018 European Championships with his first major international 200 fly title. What made Milak’s performance stand out was that his winning championship record swim of 1:52.79 was less than a tenth off his then-career best. A few days later, Japanese teen Nao Horomura made noise with his 1:53.79 swim. While Horomura has thus far found success at the 2017/2019 World University Games, Milak’s potential sky-rocketed after aging up from the 18&U group. In the Western hemisphere, American Luca Urlando also made headlines after his numerous NAG records and high placements at the senior level.

By spring 2019, right before the 2019 championship season, South African Chad le Clos was ranked outside of the top 8. Notably, half of the top 8 swimmers at the time were Hungarian, led by Milak. American Urlando was ranked 3rd at the time, yet missed out on a spot on the 2019 Worlds team by one place at the 2018 U.S. Nationals. However, Urlando earned the 200 fly U.S. national title just days after the 2019 World Championships. The 2019 World 200 fly final was another familiar scene: the talented newcomer (Milak) takes the title over the veterans (le Clos, Seto). However, the rising Milak solidified his name in history after taking down Michael Phelps‘ legendary world record (1:51.51) with a 1:50.73.

In spring 2020, COVID-19 became a global pandemic, temporarily putting a stop to many swimmers’ Olympic preparations. Despite this, the new 2021 Olympic date has given some swimmers a second chance for a career/injury comeback. After a rough comeback from his 2018 shoulder surgery, Japanese Masato Sakai saw a glimmer of hope with his 1:55 runner-up swim at the 2019 FINA Champions Series in Budapest. With the postponed Olympic date, Sakai has another opportunity to gear up for another Olympic berth. In early 2020, Luca Urlando suffered a dislocated shoulder injury, which only cut two months of swimming out before his opportunity to continue rehab throughout quarantine. Similarly, South African star Chad le Clos underwent an abdominal surgery in May 2020, which will only take roughly a month out of his regular training.

Meanwhile, Hungarians Kristof Milak, Tamas Kenderesi, and Laszlo Cseh are continuing their own pursuits towards the 2021 Olympics. While Milak has yet to earn his Olympic rings, Kenderesi and Cseh have both won Olympic medals in the 200 fly. Japanese Daiya Seto and Nao Horomura, along with Sakai, have also been able to have opportunities to train.

If there was a 4×200 fly relay Japan and Hungry would have the two best teams in history right now. Side note Japanese nationals in the 200 fly must be nuts

What happened to Pace Clark? He hasn’t raced since January 2019.

Cseh swam 1:52:91 in 2016 that makes him the third on the list
https://en.wikipedia.org/wiki/Swimming_at_the_2016_European_Aquatics_Championships_%E2%80%93_Men%27s_200_metre_butterfly
it was huge because he could have won the gold in Rio with that time a month later, he just had a bad race

I’m not sure but I think the times are from after the Olympics to right now.

Could you please add Mike Bruner alongside Mark Spitz for the 70s in your opening? Bruner won the 1976 Olympic gold as well as the 1978 World Championship gold medal and was world record holder from 1976 to 1980 when Beardsley took over the mantle. He deserves mention next to Spitz. Thank you.

Also, those Hungarians definitely know how to prepare for the 200 fly

look at this: https://en.wikipedia.org/wiki/Swimming_at_the_2016_European_Aquatics_Championships_%E2%80%93_Men%27s_200_metre_butterfly
all 4 Hungarians made the semis but only 2 were allowed. And Milak wasn’t even there.

Sort of feels like Conger is done with the 2 Fly?

It’s crazy that Shields didn’t break 2 until he has 20. Very impressive that he was able to become successful after not being that successful at a young age.

the opposite of that is Phelps who peaked and stopped growing and improving significantly by the age of 15. However, he was on top of the World by then, and he just kept staying there and the tiny drops were enough to break World Records.