Roadmaps – Mapping the Journey of US Swimming Stars: Men’s 100 Breast 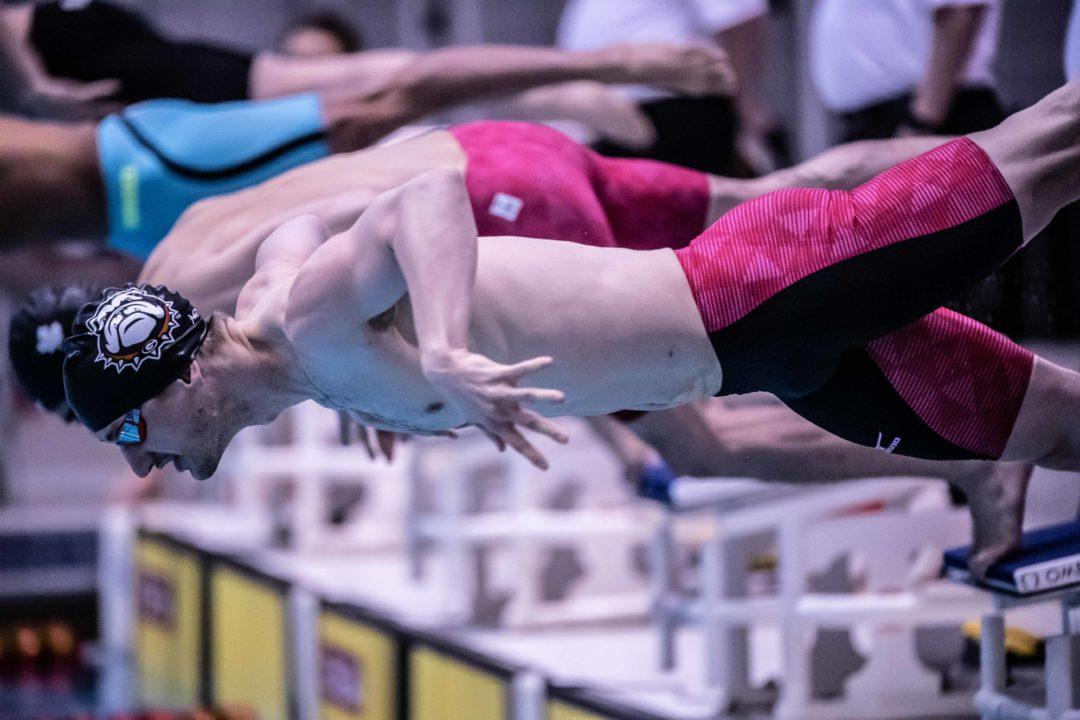 As an age-grouper, many swimmers get very excited when their coach says “stroke set”. Some pick freestyle, because it’s fast, or backstroke, because you can breathe whenever you want. But paddling to the end of the lane are the breaststrokers, gasping for a huge breath before their underwater pull-outs.

For this edition of the Roadmaps series, we will explore how the top 8 US men in the 100 breast have climbed from swimming the 50 breast as a 12&U swimmer to becoming a top-2 contender at Olympic Trials.

In the short course yards pool, Michael Andrew had already been popping 50 breast times under 33 seconds at 10 years old. Kevin Cordes, Cody Miller, and Devon Nowicki were also under 36 seconds by the time they were 10. Nic Fink was also one of the first few of this group to swim the 50 breast in the 10&U group.

The only swimmer to break 30 seconds in the 50-yard breast before turning 13 was Andrew, who ended his 12&U career with a 27.46. Cordes just made the 30-second mark by 12 while Nowicki and Miller broke 32 seconds. Ian Finnerty and Fink were well under the 40-second barrier while Andrew Wilson clocked in his first breaststroke times in the 11-12 age group.

Brandon Fischer‘s first 100 breast time was at 14 years old, no other data could be found before that age.

Entering high school, Kevin Cordes, Nic Fink, and Cody Miller dropped nearly 2-4 seconds when they turned 15 to dominate the 1:00 barrier. Ian Finnerty and Brandon Fischer turned 16 when breaking the 1:00 while Andrew Wilson, who attended one of the nation’s finest boarding schools, broke a minute around the time he was 17/18.

Utilizing the classic Speedo Swim Converter, a 1:00.00 in the LCM pool converts to 52.25 in the SCY. Andrew’s first sub-minute 100-meter breast was when he was 17, roughly one year after he broke 52 seconds in the 25-yard pool. Cordes was the only other swimmer to break a minute in his teens at 19.

When Brandon Fischer graduated from the University of Wyoming in 2012, his best 100-meter breast time was 1:03.64. However, 14 years after Fischer broke a minute in the 100-yard breast, he bounced back and was able to see 59 seconds at 30.

Despite hitting sub-1:00 at different ages, Ian Finnerty and Kevin Cordes became two of the fastest men in 100-yard breast history. Cordes, who swam for Arizona, went undefeated in the 100 breast from 2012-2015. His American record of 50.04 stood for 4 years until Indiana’s Finnerty became the first man ever under 50 seconds, marking his current American record of 49.69.

Nic Fink (Georgia) swam to two NCAA runner-up finishes in the 100 breast while Cody Miller (Indiana) won four-consecutive Big Ten titles from 2011-2014. Andrew Wilson, on a different note, had the most unique experience in the NCAA, swimming for D3’s Emory University.

Devon Nowicki went on to compete for Oakland University, placing 6th at the 2016 NCAA Championships as a freshman. Nowicki’s times plateaued after his freshman season, ultimately deciding to forgo his senior year to go pro. Brandon Fischer ended his college career with Wyoming at 54.13. Eight years later, Fischer swam to his current lifetime best of 52.34.

Michael Andrew went pro at 13 years old, making him ineligible for high school/NCAA competition. By the time Andrew was 18 years old, his SCY best was 51.18 while his LCM best remained 59.82 from the year before. With his SCY best, Andrew would have placed 3rd at the 2018 NCAA Championships as a freshman.

The Future of American Men’s Breaststroke

Kevin Cordes, who placed 3rd at the 2012 U.S. Olympic Trials, bounced back to win Trials in 2016 alongside Cody Miller to carry the torch for US men’s breaststroke. At the 2016 Rio Olympics, Miller broke out with a bronze medal finish during the 100 breast final, earning a spot on the gold medal 400 medley relay. Cordes’ efforts in the 400 medley relay prelims also earned him a gold medal.

Michael Andrew spent the remainder of his age group days building up to the senior level before breaking out at the 2016 U.S Olympic Trials, finishing 4th in the 100 breast final at 17. He then went on to sweep the sprint breast events at 2018 U.S. Nationals, earning a spot on the 2018 Pan Pacs and 2019 Worlds teams.

At the 2016 U.S. Olympic Trials, Andrew Wilson placed 5th, a year after his triple D3 NCAA title sweep. At 2018 Nationals, Wilson then finished second behind Andrew, sealing his spot on the US Worlds team after competing at the NCAA Division III level. At the 2019 World Championships, Wilson was able to seal a finals spot in the 100 breast along with picking up a silver medal from the 400 medley relay.

After making the 2013 Worlds team, UGA post-grad Nic Fink finished 7th at the 2016 Olympic Trials. He did, however, qualify for another Worlds team in 2017, followed by qualifying for the 2019 Pan Ams. After splitting 58.86 in the morning prelims of the 400 medley relay, Fink earned the finals spot in the evening, which went on to take gold.

Ian Finnerty‘s performances from 2018 NCAAs and U.S. Nationals earned him a spot on the 2019 World University Games roster. At the Games, Finnerty earned gold in the 100 breast in a new Universiade record (59.49).

Devon Nowicki and Brandon Fischer are both on the 2019-2020 U.S. National team roster and will anticipate the next U.S. Olympic Trials.

100 breast is now such a weird event for America. The best Anerican has been changing every year. In 2016, It was Miller (arguably Cordes but Miller put up the American record), 2017 was Cordes, 2018 was MA (arguably Wilson but MA was faster at nationals), and 2019 was Wilson. Excited to see who gets top 2 at trials, assuming it happens eventually

No, I meant the one on Mars.

This is one event where the speedo time converter is very suspect. It converts Finnerty, Cordes, and Dressel to 57s in LCM!!

The USA needs someone to break through in this event – 58.5 or better. Who? Andrew seems to be the best bet.

Finally, the USA needs young talent in the breaststroke. Matheny looks good but there needs to be more.

has not impressed me in LCM yet. At the moment, he is not close to swimming a 58.

Why the thumbs down for Reece Whiltey?