Roadmaps – Mapping the Journey of US Swimming Stars: Women’s 100 Free 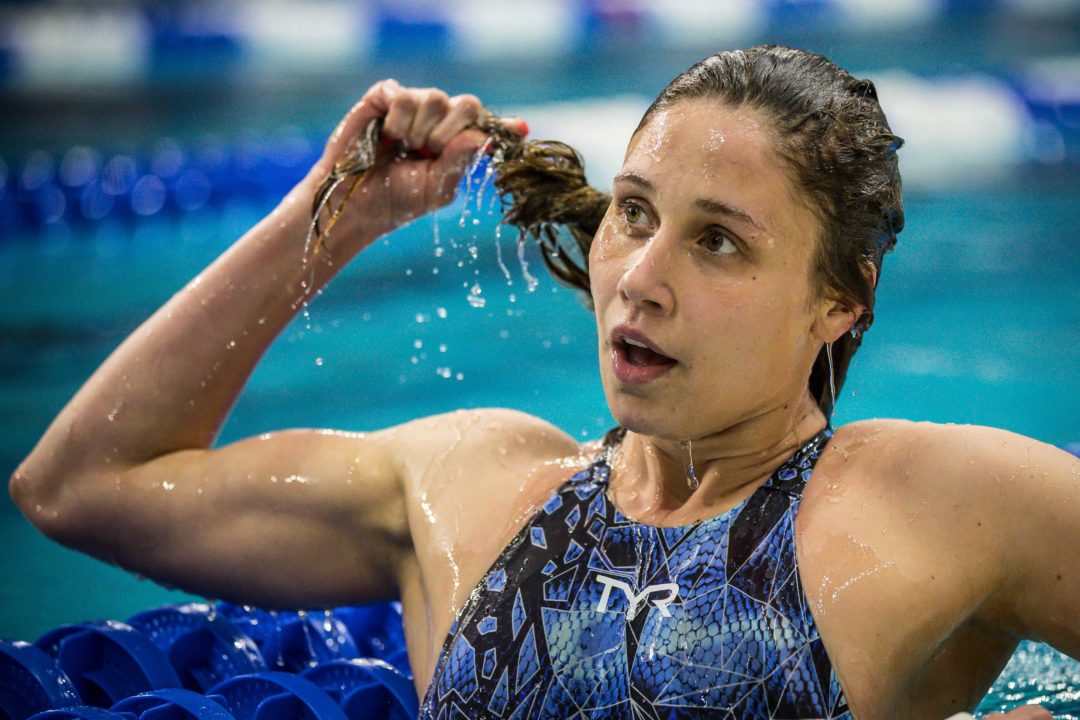 In our second installment of Roadmaps, explore paths of the top US women's 100 freestylers, starting from age group days all the way to the elite level. Stock photo via Jack Spitser/Spitser Photography

In our new series, Roadmaps – Mapping the Journey of US Swimming Stars, we will explore how modern-day Olympians climbed their way to the top, starting from as early as 8 years old all the way to their elite level today. Click here to view our first installment on the men’s 100 free.

In the second installment of Roadmaps, we will dive into the top 8 US women’s 100 freestylers of this Olympic quad. As we explore the paths this group of women embarked on, we will be able to see each unique triumph and trial that brought each woman to their elite status.

Lia Neal and Gretchen Walsh swam their first 100 free at 8 years old, meanwhile, the rest were in the 9-10 age group. Abbey Weitzeil, on the other hand, did not start competitive swimming until she was 12 years old. No matter who started swimming the 100 free first, there is always a pack that has raw, natural talent. Simone Manuel and Neal were swimming under a minute in the 100-yard free by the time they were 10 years old. Margo Geer was the only swimmer in this group to break 1:00 SCY before becoming a pre-teen (11-12 years old).

Walsh and Erika Brown were the first of the remaining 5 swimmers to break 1:00 when aging up to the 11-12 age group. Mallory Comerford, Abbey Weitzeil, and Allison Schmitt, who did not progress as quickly as the others, eventually caught up and broke the barrier by the time they were 12. Transitioning to the LCM pool, Manuel, Neal, and Walsh broke 1:00 before they turned 13 years old while the remaining swimmers were teenagers when breaking the barrier.

Lia Neal and Gretchen Walsh became stellar sprinters at 11 years old, already swimming under the 55-second barrier in the 100-yard free. Both swimmers were also popping sub-50 swims at 13 years old in the SCY pool. Simone Manuel, Erika Brown, and Margo Geer were other swimmers who popped sub-55 times as a pre-teen.

While having two years of USA Swimming under her belt, Abbey Weitzeil quickly progressed under 55 seconds by 13. Mallory Comerford and Allison Schmitt, who quietly competed in Michigan, were in the late 13-14 age group when going sub-55. Schmitt’s primary focus was middle-distance freestyle (200-500) while Comerford was stuck at the 50-point barrier SCY for 4 years (14-17).

Into the LCM pool, Neal, Walsh, and Manuel continued to accel past the 55-second barrier, beginning to compete at the senior level by age 15. Weitzeil and Comerford focused in the SCY pool and were in the 17-18 age group when they saw 54-point. Brown (19), Geer (20), and Schmitt (21) were well into their NCAA years when they broke 55 seconds LCM.

Simone Manuel was a historic member at Stanford, sweeping both sprint events for 3 seasons (2016-2018) before going pro her senior year. Erika Brown broke out as a sophomore with Tennessee, primarily focusing in sprint free and fly. Brown then excelled to earn an NCAA runner-up finish in the 50 free in 2019, break the 100-yard fly American record, and become the second woman to break 46 seconds in the 100 free behind Manuel.

Mallory Comerford became the second woman in history to break 1:40 in the 200-yard free, as well as won two NCAA titles in the 100 free with Louisville. Allison Schmitt was an iconic member with Georgia, winning 6 titles in the 200/500 free across 2009-2013.

Gretchen Walsh is only 17 years old, however, the UVA commit would have swept both sprint events at the 2020 ACCs with her current times. Walsh was in fact 15 when she was swimming sub-48 SCY times, the youngest age of the entire group.

Entering late high school, many swimmers begin to reach the dreaded “plateau”. For those unfamiliar with the term, a plateau describes the time period when a swimmer is not dropping time, an uphill battle for any swimmer. All swimmers, as you may have guessed, do not experience their plateau at the same age.

Margo Geer (Arizona) and Neal (Stanford) also experienced small plateaus in the SCY pool, but were able to break their LTBs by 22 years old. Geer went on to win the 100 free in 2013 and 2014 while Neal earned three consecutive runner-up finishes from 2014-2016.

Manuel, Neal and Florida’s Natalie Hinds made history at the 2015 NCAA Championships, becoming the first African-American trio to finish 1-2-3 in a single event (100 free).

It didn’t take long too much longer for these swimmers to reach the elite international level. Allison Schmitt was the first to qualify for the Olympics, earning bronze in the 800 free relay in 2008 at 18. In 2012, Schmitt earned berths in the 100/200/400 free. Meanwhile, Lia Neal‘s 4th-place finish in the 100 free changed her life and history, becoming the 2nd African-American woman to qualify for the Olympics at 17. Neal’s efforts earned her a silver medal on the 400 free relay alongside fellow teen Missy Franklin.

In 2016, up-and-comers Simone Manuel and Abbey Weitzeil became the top 2 US women in both sprint events. At the same time, Neal and Schmitt sealed solid relay spots for another Olympic team. Manuel then emerged an Olympic champion while Neal, Schmitt, and Weitzeil all picked up relay medals.

Margo Geer, who earned 3 relay medals at 2015 Worlds, failed to reach the top-8 final for the second Trials in a row. Her best finish at Trials was when she placed 7th in the 50 free final in 2012. Geer then switched coaches and went to Coley Stickels, who coached Weitzeil during her breakout age group years.

Erika Brown, after making the 2016 SC Worlds team, bounced back her sophomore/junior years at Tennessee and earned a U.S national title in the 50 free in 2019. Taking second in the event was Gretchen Walsh, earning her a spot on the 2019-2020 senior national team. At the 2019 World Junior Championships, Walsh went on to earn double golds in both sprint events at 16.

Mallory going in the wrong direction in relation to the clock and her peers. That’s what stood out. It was already obvious anyway but then glaring from the table. She’s lost 2 seconds net to Erika Brown in two years. Mallory may have had a letdown after finishing college. Short course plays to her strengths. But at least the recent 53.87 was the best she has looked in recent months.

She’ll go 52 and make the team. (Whenever the team is selected).

Great series! Waiting for a breakout 100 from Abbey, 52.5 or better, she has the talent

This is an awesome series, keep it up. Would be awesome to see the data on Amanda Weir as well

An international version of these would be really cool – particularly for deep events like women’s 200 free, men’s 200 breast.

We’ll look into it. For “all countries,” it can be quite hard to find age progressions. For some countries, like the UK and Australia, it’s easier.

Maybe not so much when they were younger but more focused on their development throughout this last 4 year cycle.

Swimrankings.net has the age progression for most European countries