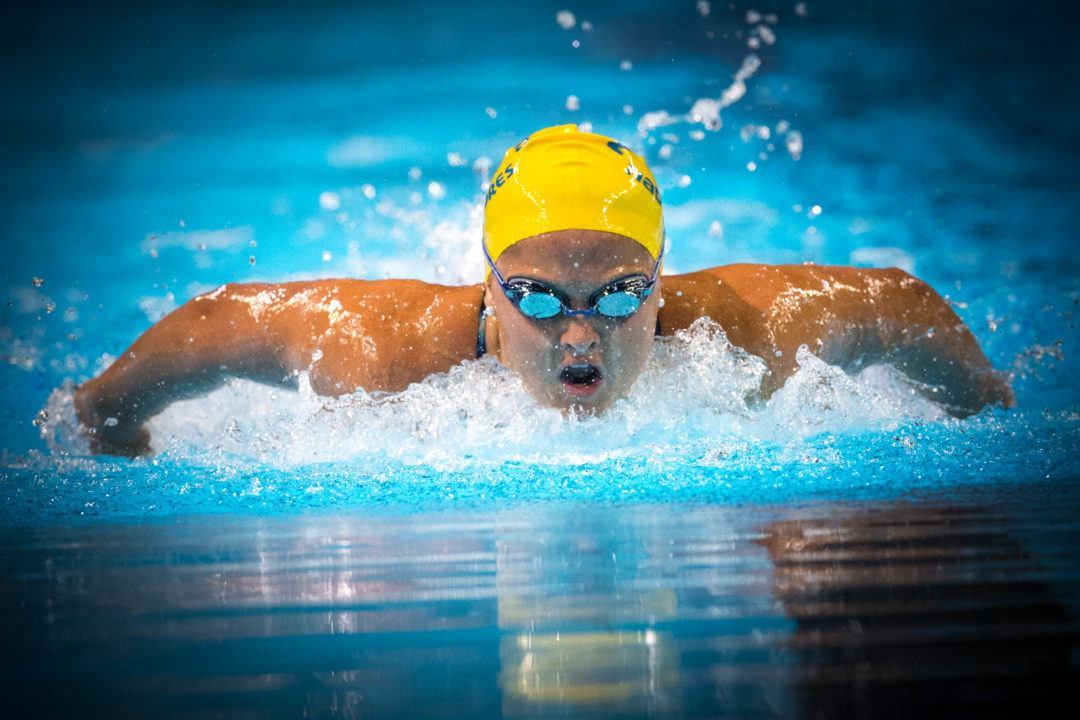 UNLV opened up a decisive lead over the defending champions Air Force on the 2nd day of the 2021 WAC Champs.

In an AAC Champs with a smaller field than we’re used to, the Houston women and SMU men have jumped out to early leads after the 1st day of competition.

The Louisville Cardinals won their first ACC title in the 200 free relay with a deja vu leadoff swim and a pair of sub-19 relay splits.

With the addition of Chaney, Florida has its most complete medley relay team in years, highlighted by their school record in the 400 MR.

Matt Brownstead Third Freshman To Go Sub-19 in Two Days, A Sign of the Times

UVA freshman Matt Brownstead won the ACC 50 free title today with a 18.88, becoming the third freshmen in two days to get under 19.0.

How hard was it for you to learn how to swim butterfly? Many age-groupers can initially struggle when learning the rhythm to butterfly given the relatively unnatural motion of the stroke. However, there are the swimmers who seem like they were born to swim fly. As we dive into this Roadmaps installment, you will learn about some of the fastest American women in the 100 fly today.

Leading the way is the lone Olympian of the group, Kelsi Dahlia (56.37), by nearly a full second over her nearest competitor, 2018 national runner-up Katie McLaughlin (57.23). Teenagers Regan Smith (57.34) and Torri Huske (57.48) file in as the next-fastest 100 flyers right behind McLaughlin.

Among the veterans of the group are the 2nd and 3rd place finishers at the 2019 U.S. Nationals, Amanda Kendall (57.51) and Aly Tetzloff (57.50), along with 2019 Pan American Games champion Kendyl Stewart (57.51). 15-year-old sprint phenomenon Claire Curzan (57.87) cracked the top 8 American times this past summer, writing herself into the conversation.

How each swimmer progressed, in theory, is based on two skills: their butterfly stroke and underwater dolphin kicks. Regan Smith and Claire Curzan both developed stellar underwater skills in their age group days, allowing them to accel early in multiple strokes. Smith is one of three American females who swam under 1:00 in the 100-yard fly at 10 years old. Meanwhile, Curzan was also a young 11 years old when hitting 59-point in the short pool. Aly Tetzloff is another swimmer whose underwaters propelled them throughout their career, as she broke 1:00 SCY by 13 years old.

Contrastingly, Katie McLaughlin and Kendyl Stewart broke 1:10 LCM first before breaking 1:00 SCY, showing long course proficiency in the 11-12 age group. Amanda Kendall just turned 13 when she swam under 1:10 in the long pool, two years before she broke 1:00 in the short pool.

Below is the race video when Curzan and Smith raced side-by-side. Just a reminder, Smith was 17 and Curzan was 14.

The Ones Who Caught Meagher

One of the brightest age group swimmers of the mid-2010s was Katie McLaughlin, becoming a very successful freestyler/flyer at the junior international level. In 2015, McLaughlin broke the 17-18 NAG in the 100-meter fly at 57.87, becoming the first 18&U swimmer to swim under Meagher’s lifetime best (57.93). In 2020, Smith slimmed McLaughlin’s mark down to 57.34, crowing herself now as the fastest American junior female to swim the 100-meter fly.

The two went on to the 2019 World Junior Championships, where Huske won gold in a new NAG while Curzan took bronze behind Belarus’ Anastaysia Shkurdai. In the race video below, Huske and Curzan sandwich Shkurdai from lanes 3-5.

In the video, you can almost notice how similar Meagher’s stroke is to Huske’s stroke.

Kendyl Stewart had a bright freshman year at USC, winning the Pac-12 title in the 100-yard fly. She improved the next year at the 2014 U.S. Nationals, winning the event and sealing her spot on the 2014 Pan Pacs and 2015 Worlds teams. At the 2015 NCAAs, she capped her college career with a 3rd place finish in the 100 fly.

Dahlia pushed her momentum to the next level at the 2016 U.S. Olympic Trials, winning the 100-meter fly over the defending Olympic champion, Dana Vollmer. Stewart placed 3rd during the same Trials final, missing out on the Olympic team. While Dahlia didn’t final in the event at the Olympics, she did earn a gold medal from swimming the 400 medley relay in prelims.

Katie McLaughlin was a bright swimmer for Cal in 2015, however, suffered an injury her freshman year that slowed down her collegiate progress. Nevertheless, in 2018, she came back to a 2nd place finish at the 2018 U.S. Nationals, earning spots on the 2018 Pan Pacs and 2019 Worlds teams. Her senior year at Cal, McLaughlin swam up to break 50 seconds in the 100-yard fly and place 3rd at the 2019 NCAAs.

Amanda Kendall had a quiet start in high school, however, she quickly became one of the brightest rising swimmers in college. In 2011, she finished 7th at the NCAAs as a sophomore with LSU. After taking a break, Kendall returned to the pool in 2014, excelling up to the 2016 Olympic Trials’ semi-finals.

Aly Tetzloff also had her quiet start when swimming for Auburn, however, broke out her senior year in 2019. At the 2019 SEC Championships, Tetzloff placed 2nd in the 100-yard fly and took the SEC title in the 100 back. At that year’s NCAAs, Tetzloff placed 5th in the 100 fly, her best individual finish. She then carried the momentum over to 2019 nationals, where she placed 3rd behind Kendall and Dahlia.

Up next for the Roadmaps series will be the men’s 100 back, featuring world record-holder Ryan Murphy.

Kelsi Dahlia should’ve made that final in Rio. Didn’t someone in the final get suspended for doping?

Chen Xinyi, who had her results stripped after testing positive in Rio.

I’m definitely late to this but amazed at how meagher swam those times without goggles??!