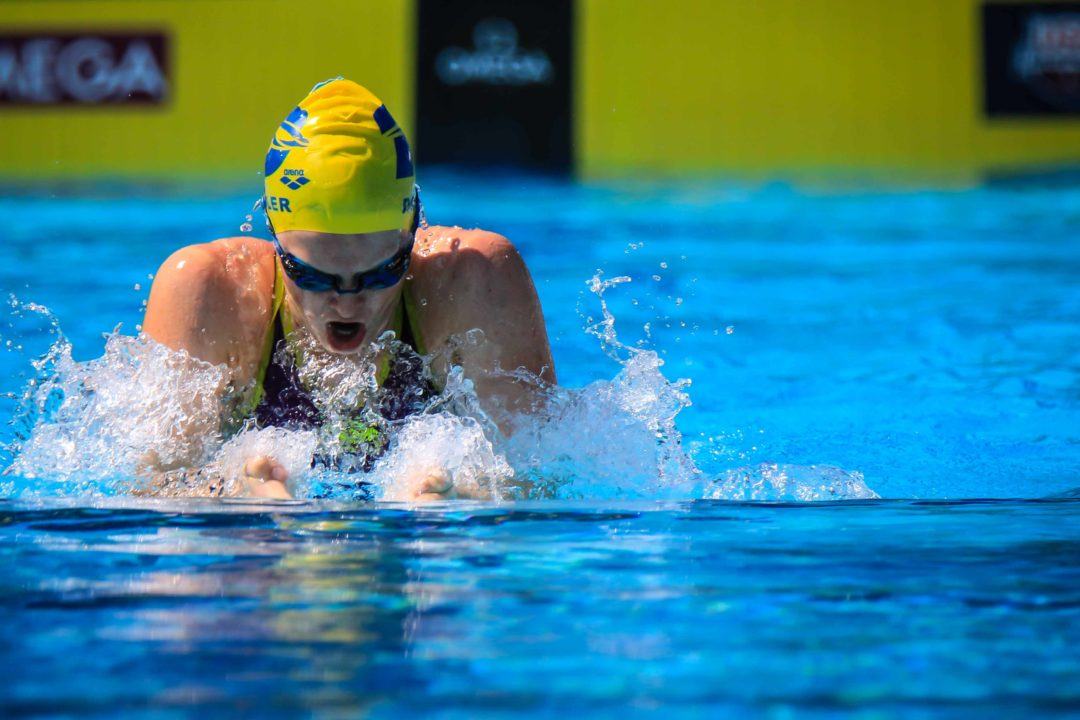 Wonder when each of the top 8 US women's 100 breaststrokers broke 1:00 in the SCY pool? Find out in this installment of Roadmaps! Stock photo via Jack Spitser/Spitser Photography

Breaststroke, while it looks easy to swim, is truly a stroke of its own. Some swimmers are born with natural breaststroke talent and can flawlessly execute the stroke. Other swimmers just don’t seem to move when they swim breaststroke. Regardless, breaststrokers are in a league of their own.

Before the 100 breast came the 50 breast, which is one of the more competitive races for the 12&U age group. When this group was 10 years old, Micah Sumrall already had swum under 35 seconds in the 25-yard pool while Melanie Margalis, Molly Hannis, Kaitlyn Dobler, Annie Lazor, and Lilly King all were swimming under 40 seconds. Bethany Galat had not yet begun USA Swimming competition until she was 12 years old.

Breeja Larson competed in 3 sports during high school, including swimming, but did not fully commit to the sport until she was 17.

When the group entered their early teens, the 1:10-second barrier was within reach in the 25-yard pool. Breaking the barrier before turning 13 were Kaitlyn Dobler, Annie Lazor, Micah Sumrall, and Melanie Margalis. Lilly King and Molly Hannis broke the barrier by the time they were 13 while Bethany Galat was 14.

Breaking 1:10 in the 50-meter pool and breaking 1:00 in the 25-yard pool roughly correlate with each other. According to our Speedo Time Converter, a 1:10 LCM time converts to a 1:01.26 in short course yards. Dobler and King broke the minute barrier while in the 15-16 age group, putting them at a very competitive level as high school underclassmen. Galat and Larson turned 18 when they broke a minute while Hannis, Sumrall, and Lazor did hit 59-point until college. Margalis, who specializes in IM, broke 1:00 when she was 20 years old.

Switching to the NCAA

Kaitlyn Dobler is a high school senior, but recently swam her personal best time of 58.35 this year, breaking the national public high school record. The USC commit would have easily won the 100 breast at the 2020 Pac-12 championships by a full second. In the 2019-2020 NCAA season rankings, Dobler would have ranked 5th.

Lilly King, who was also a former national high school record holder, went on to become a 4-time 100 breast NCAA champion with Indiana from 2015-2019. As a Texas A&M Aggie, Breeja Larson went on to win three-straight NCAA event titles from 2012-2014 after taking silver her freshman year.

King, Larson, Galat, and Lazor all set their SCY lifetime bests while in college while Dobler still has her NCAA career ahead of her. Hannis was stuck at 58.22 for three years until she popped 56.64 at 25 years old. Margalis and Sumrall, who primarily favor the 200 event over the 100, were 24 years old when they broke their collegiate bests.

Coming off her first NCAA title, Breeja Larson shocked the world when she won the 2012 Olympic Trials event final, punching her ticket to London alongside Rebecca Soni. Micah Sumrall, although finishing 7th in the event final, did manage to place 2nd behind Soni in the 200 breast to earn her first Olympics trip. At the Games, Larson placed 6th in the event final along with earning a gold medal thanks to her 400 medley relay efforts. Sumrall finaled in the 200 breast, placing 7th.

Fast forward to 2016, it was Lilly King who topped the U.S. Olympic Trials 100 breast final alongside now-retired Katie Meili. While Molly Hannis did not qualify for Rio in the 100 breast, she did seal her first Olympic berth with a second-place finish in the 200 breast. Sumrall and Larson, unfortunately, were not able to repeat their 2012 performances and did not make an Olympic team that year.

Melanie Margalis is also a 2016 Olympian, picking up the 800 free relay and 200 IM into her Olympic schedule at the same Trials. In the 100 breast, Margalis placed 7th in semi-finals, but scratched the final. Bethany Galat also scratched her 14th-place prelims seed to focus on the 400 IM and 200 breast.

Unfortunately, Galat placed 3rd in both events, just missing out on an Olympic team. In 2017, however, Galat rebounded to a 2nd-place finish in the 200 breast to seal her spot on the 2017 World Championships roster. At the Worlds meet, Galat was able to earn a silver medal in the event final.

At the 2016 Olympics, King became the first American woman to win the 100 breast at the Games since 2004. While Hannis did not earn a medal, Margalis’ efforts in the 800 free relay prelims earned her a gold medal.

Annie Lazor was also disappointed with a 10th-place finish during the 2016 Trials, prompting her to take a break from swimming. When Lazor came back to competition in 2018, she broke out to a lifetime best in the 100-meter breast (1:06.03) as a post-grad. This then earned her a spot on the 2019 Pan American Games roster, where she won both breaststroke events.

Kaitlyn Dobler‘s runner-up finish at the 2019 U.S. Nationals qualified her for the 2019 World Junior Championships roster. At the meet, Dobler finished second in the 100 breast final, breaking 1:07 for the first time. She also picked up a bronze in the 50 breast and a gold medal from the 400 medley relay. If Dobler were to have swum at the 2016 Olympic Trials, her current lifetime best would have placed 4th in the event final.

Up next for the Roadmaps series will be the men’s 100 fly, featuring world record-holder Caeleb Dressel.

Momentum’s with Dobler on this one… hasn’t swum LC since that 58 in yards, plus another year will benefit her immensely compared to the other 2nd place contenders.

While she is retired, it would be really interesting to add Katie Meili to the progression table. So much of her improvement came in college and beyond and I imagine that it would be empowering for younger athletes to see.

I’m not going to lie – This is quickly becoming my favorite series. Keep it up!

Hannis is the favorite

Love this article, showed it to my 13 year old daughter who is a breaststroker. Seeing how she had faster times at 12, and second fastest at 13, just made all these dryland workouts for the next few months that much easier to get through.

Great fun! Thanks for your work.
A little supplemental information for you as to Breeja Larson. In the fall of 2006 she did swim as a 14 year-old Freshman for Mesa Westwood in the Arizona State High School Championships. She split :31.23 as the breaststroker on the Westwood Medley Relay. She then placed 6th in the 100 Breaststroke at 1:08.88 (split :32.18, prelim time 1:10.40). She then moved to Idaho creating the two year gap during which I understand she did swim some, but I have no knowledge of any times for her. She returned to Mesa as a Senior, swimming at a different High School, Mesa Mountain View. I recall she was a bit of an invisible juggernaut… Read more »