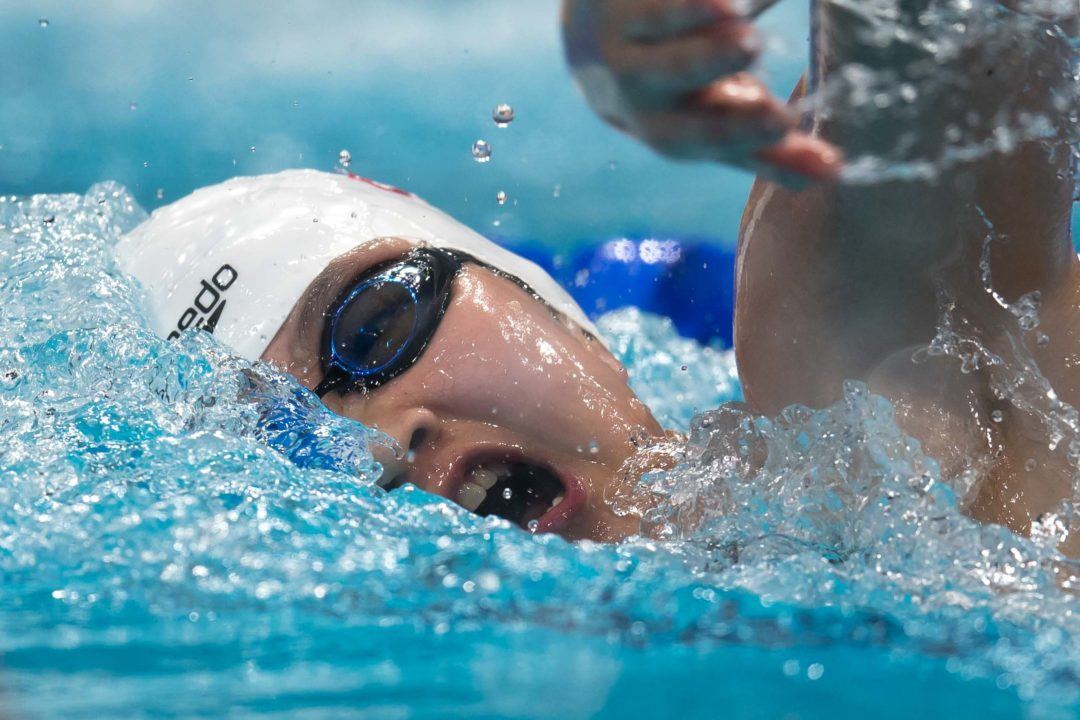 In 2020, there are four 19&U women who are torching up the 800 free scene. Find out to see if they have what it takes to catch sensation Katie Ledecky. Stock photo via Mike Lewis/Ola Vista Photography

At the 1989 Pan Pacific Championships, 17-year-old Janet Evans reset her own 800-meter free world record for the third time in her career, posting an 8:16.22. That record stood for 19 years until 19-year-old Brit Rebecca Adlington destroyed Evans’ mark at the 2008 Olympics (8:14.10). Five years later at the 2013 World Championships, 16-year-old American Katie Ledecky snatched the world record from Adlington at 8:13.86. Since then, Ledecky has broken her own 800 free world record four times, topping it with her current 8:04.79 mark from the 2016 Olympics.

In 2020, no other woman, except Ledecky, has swum under Adlington’s 8:14.10 mark from 2008. However, Ledecky and Adlington were both 19 years old when they hit their (current) lifetime bests. In this Olympic cycle, there are four women under 19, Hungarian Ajna Kesely, Aussie Ariarne Titmus, and Chinese Bingjie Li and Jianjiahe Wang, that could shave down those marks in the next year. Joining them in this battle include 2019 World runner-up Simona Quadarella, multi-time World medalist Leah Smith, and German veteran Sarah Kohler.

Age Group: When Did They Catch Evans?

*More will be discussed about the women’s 400 free in its own Roadmaps installment.

At the 2016 Olympics, four women swam under the 8:20 mark, including the sub-8:17 top three. Yet at the 2019 World Championships, six women swam under 8:20, with the entire top three swimming under Evans’ 1989 world record. With the Tokyo 2021 slowing counting down, there are now seven women who have been under 8:20 this Olympic cycle, setting up one of the fastest Olympic 800 free finals yet. With this in mind, let’s take a look at the current top eight candidates who could partake in the 2021 final.

Katie Ledecky has not touched her 8:04.79 world record since 2016. However, she has also owned the 800 free since 2012, picking up 2 Pan Pacific titles, 4 World titles, and 2 Olympic titles in the event alone. At this point, the 2021 title is Ledecky’s to lose. But that changed at the 2019 Worlds final when Simona Quadarella valiantly took a jab at the 800 free queen.

Before the 2019 World final, Quadarella stacked up 5 international medals in the 800 free, including the 2018 European title. However, at 20 years old, she had yet to break the 8:20 mark. Quadarella qualified 4th into the 2019 World final after preliminaries, putting herself in heavy contention for a medal. But this final came after her historic 1500 free gold. Off the start in the final, Quadarella exploded ahead of Katie Ledecky. In the end, Quadarella did not defeat Ledecky, but picked up a valiant World silver medal. Her time of 8:14.99 is now No. 2 in European history and No. 4 in world history.

Sarah Kohler has yet to earn an international medal in the 800 free. While she took 1500 free silver from 2019 Worlds, she was also part of the competitive 800 free final. Kohler maintained a third-place lead for the majority of the race until Ariarne Titmus caught her at the last turn. From there, it was a dogfight for the bronze medal. By the last 15 meters, Titmus already had established herself for bronze. Nonetheless, it was a stellar fourth-place finish for Kohler after placing 8th in the 2016 Olympic final. She also dropped 4 seconds from her lifetime best, punching in 8:16.43.

In that same final, Leah Smith was also fighting for another World medal to her collection, yet finished in fifth behind Kohler. Smith finished with an 8:17.10, which was just off her lifetime best. Smith would have had to swim a near-lifetime best in order to get a medal. Despite this, Smith’s numerous relay medals for Team USA show time again that she is a racer.

As previously mentioned, there are four teenagers in this group that are nearing Katie Ledecky and the 8:10 barrier. Among them is Aussie Ariarne Titmus, who picked up bronze in the 800 free at 2019 Worlds after defeating Ledecky in the 400 free. Titmus’ only international 800 free win came from the 2018 Commonwealth Games, which was followed up with her 2018 Pan Pacs event silver. China’s Bingjie Li, on the other hand, has an 800 free World silver to her name, which she earned at the 2017 World Championships at 15 years old. However, Li has not touched her 8;15.46 lifetime best since 2017 Worlds.

Li’s fellow country-mate, Jianjiahe Wang, immediately took over Li’s place in the distance events for China. At the 2018 Asian Games, Wang swept the 400-1500 free, following that up with a short course World title a few months later. At 2019 World 800 free final, Wang kept up with the pack, yet faded to sixth place. Earlier in the meet, however, Wang had earned bronze in the 1500 free final.

Ajna Kesely was another teen who found more success outside of the 800 free. While Kesely just missed medaling in the 400 free at 2019 Worlds, her time of 4:01.31 was good enough to break the Hungarian record. As for the 800 free, Kesely placed 10th in prelims at 8:32.34, missing out of the final. Kesely’s current personal best of 8:22.01 comes from the 2018 European Championships, where she took silver behind Quadarella.

Her drop from 12 to 13 is wild. Basically from fast kid to elite in a season.

Some time ago there was a young lad in my county, he went 16:58.99 at Nationals in the 1500 just after his 12th birthday. I’ll remember that time for the rest of my days.

Did he ever swim much faster? The most dominant domestic junior swimmer I can remember in the UK was a distance boy too. He went 15.40s when he was 13. Retired with a PB in the 15.30s set when he was 14. He still holds a plethora of National age group marks free, fly and IM, many of said marks were still his PBs when he retired.

I didn’t miss it. I was staring at that number and nothing else. Ignoring subjectivity and merely looking at numbers by age, the two who seem possible for greatest breakthrough in 2021 are Li and Kesely. Both flattened out in mid teens but that doesn’t mean they aren’t eligible to restore prior trajectory. The Chinese are always hard to figure. Kesely may be a case of prioritizing the 400 while taking away from 800 improvement. She really should have had the bronze in that 2019 world championships 400 other than a lazy Lochte-type final touch while Leah Smith attacked the final stroke like Phelps.