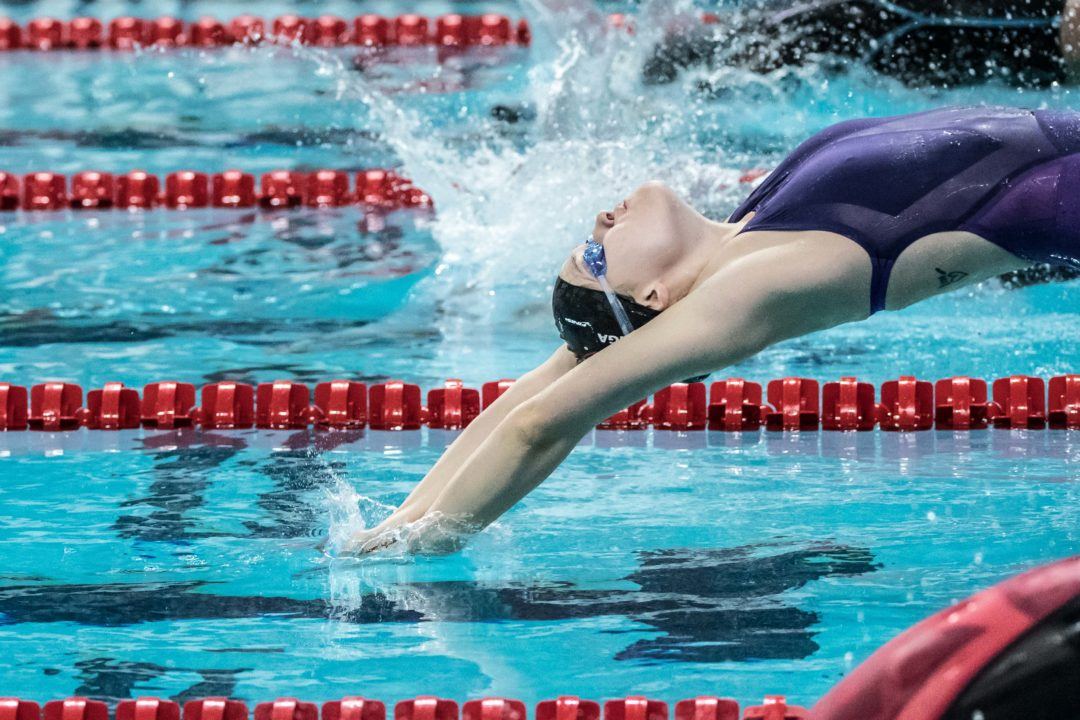 Read on how Regan Smith, Kathleen Baker, Olivia Smoliga, Phoebe Bacon, Amy Bilquist, and more raised the bar for the 100 back throughout the years. Stock photo via Mike Lewis/Ola Vista Photography

butIn our new series, Roadmaps – Mapping the Journey of US Swimming Stars, we will explore how modern-day Olympians climbed their way to the top, starting from as early as 8 years old all the way to their elite level today.

One of the most competitive events in the US this Olympic quad is the women’s 100 back, headlined with college stars and teen prodigies. Among this talented octuplet include the three fastest 15-16 swimmers in 100-yard back history, two (current and past) world record-holders, and numerous major national/international event champions. Read more about how these women sky-rocketed to the senior elite level in this installment of Roadmaps.

In 2013, Regan Smith made history as the first US 10&U swimmer to break 1:00 in the 100-yard back. She also stormed to a 27.79 in the 50-yard back at 10 years old. Two years later, Miriam Sheehan dominated both of Smith’s records, however, now represents Puerto Rico internationally. No other American 10&U female has yet to break Smith or Sheehan’s marks.

Before her 16th birthday, Regan Smith was already under 52 seconds in the 100-yard back and 1:00 in the long course event. Phoebe Bacon, Isabelle Stadden, and Katharine Berkoff were also under 52 SCY and 1:00 LCM before turning 17. Contrastingly, Ali DeLoof did not hit those competitive marks until she was 21.

Olivia Smoliga, while starting competitive swimming at 12 years old, quickly progressed throughout middle and high school. Once Smoliga reached high school, she became a multi-time Illinois state champion and record-holder. Her 100 back national public high school record of 51.43 from 2012 still stands to this day.

Currently, Regan Smith is the fastest 15-18 US female to ever have swum the 100 back. In the 15-16 age group, Phoebe Bacon remains the second-fastest ever to hit the 100 back SCY and LCM. Isabelle Stadden is the 3rd-fastest 15-16 swimmer in the 100-yard back at the 4th-fastest in the LCM event, right behind 2012 Olympic champion Missy Franklin. Along with Smith, Bacon, and Stadden, Amy Bilquist, Katharine Berkoff, Kathleen Baker, and Olivia Smoliga rank in the top-10 fastest 17-18 US swimmers in 100 back history.

Kathleen Baker was the only swimmer of this group to earn an NCAA title in the 100-yard back, which she earned as a freshman at Cal. Olivia Smoliga, despite not earning a 100 back title, did top the 50-yard free as a freshman and junior with Georgia in 2014 and 2016. Ali DeLoof broke out onto the senior elite level during her time with Michigan, earning numerous relay All-American finishes from 2013-2016. Amy Bilquist became a stellar relay asset to Cal, earning 6 NCAA relay titles during her 2016-2019 career.

Katharine Berkoff (NC State) won the 2020 ACC title in the 100-yard back as a freshman, but she has yet to break her sub-51 lifetime best (50.72) from high school. While the 2020 NCAA Championships got canceled due to COVID-19, Berkoff was ranked 8th place overall on the psych sheets, the fastest freshman in the event. Regan Smith, Phoebe Bacon, and Isabelle Stadden are still in high school, however, all of their 100-yard back times would have easily placed at the 2020 NCAA Championships. Smith would have ranked 1st, Bacon 5th, and Stadden 9th.

Kathleen Baker and Olivia Smoliga‘s performances in 2016 raised the bar for US women in the 100-meter back. During the 2016 U.S. Olympic Trials final, Smoliga and Baker shut out Missy Franklin and Natalie Coughlin for their first Olympic teams. At the Games, Baker had an epic showdown with Iron Lady Katinka Hosszu in the 100 back final, earning an Olympic silver medal. Smoliga, despite not medaling in the final, was able to earn a gold medal by swimming the 400 medley relay in prelims.

At the 2016 U.S. Trials meet, Amy Bilquist and Ali DeLoof finished 3rd and 4th respectively during the 100 back final, missing out on the Olympic team. While both missed out on the team, they worked hard during their NCAA careers. At the 2019 U.S. Nationals, Bilquist finally won her first 100-meter back national title. DeLoof did earn a short course Worlds silver medal in the 50-meter back in 2016.

Teenagers Regan Smith, Phoebe Bacon, Katharine Berkoff, and Isabelle Stadden quickly responded to Baker and Smoliga by tearing up junior competition before breaking out at the senior level during the beginning of this Olympic cycle. Smith became a double World champion and backstroke world record-holder in 2019, two years after making her first Worlds team at 15. Bacon and Stadden went on to earn medals at the 2019 Pan American Games while Berkoff became the 100 back champion at the 2019 World University Games.

No, she doesn’t have one of the top 8 times in long course meters.

For a second I interpreted that as LCM, and the world swirled around me; the ground shook. I wondered what year it was (and how fast swimming had become), and how I was now oddly underwhelmed by Smith only dropping 2.5 seconds from 10 years old to now.

And then I realized it said yards.

It is not easy to manage such great talent at a young age, and Mike Parratto did a phenomenal job with Regan. She gets better every year, so bravo to him for being patient when she was younger while thinking of the big picture.

I love that suit in the picture, I wish speedo still made that color

Thanks to SWIMSWAM for putting these together. Lot of work, but very veluable, educatonal, and entertaining (sparks a lot of discussion). And, WOW on this group, if they happen to be the finalists whenever OTrials are held will be one heck of a race by some great talent.

mens and womens 200s of each stroke 🙂