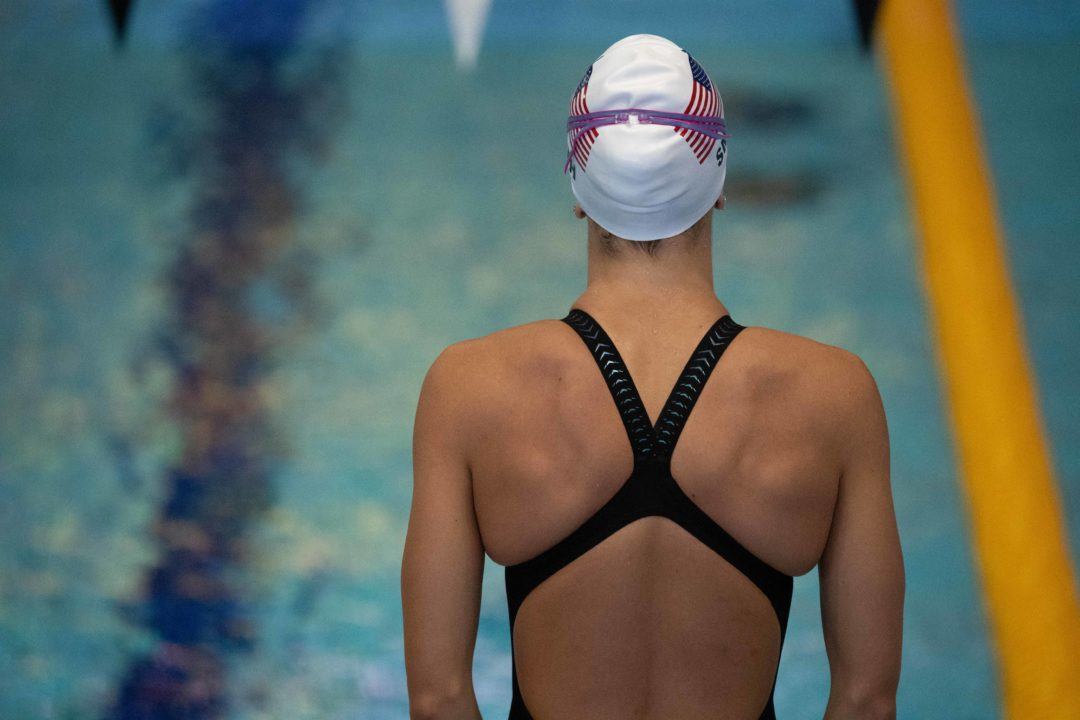 Regan Smith and Kaylee McKeown are the two fastest teens in the women's 200 back. But who will take the 2021 Olympic crown and who will break 2:00 first? Stock photo via Mike Lewis/Ola Vista Photography

In 2011 and 2013, American teenager Missy Franklin stormed to back-to-back world 200 back titles, spaced by her 2012 Olympic title. After that, six years went by where a teenage woman had yet to top a major international 200 back final. That all changed at the 2019 World Championships, where 17-year-old American Regan Smith was crowned the world 200 back champion after breaking Franklin’s 2012 world record in the semi-finals. Yet what made the final all the more historic was 18-year-old Aussie Kaylee McKeown‘s finish, who touched out veterans Kylie Masse (Canada) and Margherita Panziera (Italy) for world runner-up, creating a teen 1-2 event sweep.

What could make the women’s 200 back more historic in 2021? What about an entire teen podium sweep plus a world record? In this installment of Roadmaps 2.0, we will explore a new limit the LCM women’s 200 back that could make headlines in 2021: hitting 1:59. How has this Roadmaps group progressed over the years past the 2:10 barrier to their career best? Do teens Smith and McKeown have a 1:59 in their sights based on their current progression? Read on to find out more.

Who is “Most Improved”?

Another table talking about who broke 2:10 first would be boring, so instead we broke down who has been improving the most in the 200-meter back. A yearly time-drop average was calculated after selecting a five-year period when each swimmer broke (or neared) 2:10 to when they set their current career best. If a swimmer did not drop time one year, a zero was put in place of a time drop. Looking at the below table from afar, the teen/college swimmers have a higher time drop average than their adult counter-parts.

Since her first swim in the 200 back, Regan Smith has consistently dropped time every year (with the exception of 2020). Her world record (2:03.35) set at the 2019 World Championships chopped 2.66 seconds from her then-world junior record (2:06.01) from prelims, which gave Smith a yearly average time drop of 2.59 seconds. Kaylee McKeown hit the 2:10 barrier at 14 years old, however, her yearly time drop average has been 0.92 seconds.

Canadian Taylor Ruck, who is currently 19, and Kathleen Baker, now post-grad age (23), both have not broken their career bests in 3 years. Despite this, Ruck and Baker’s time drop averages were at least 1 second each year during their high school/NCAA careers. The averages of the four adult swimmers (24+) in the group (Margherita Panziera, Kylie Masse, Emily Seebohm, Katinka Hosszu) was -0.83 seconds each year. Notably, each of these swimmers had at least one year where they did not drop from their personal best.

If we apply the adult group’s yearly time drop average (-0.83s) to 2020 teens Regan Smith, Kaylee McKeown, and Taylor Ruck, we could predict their progress into their early 20s. Since any of these swimmers could encounter a big swim or a tough hurdle, this theory is the next closest step to making a prediction before making hypothetical theories in their progress. Fast forwarding four years from now to the 2024 Olympics, 22-year-old Regan Smith, 23-year-old Kaylee McKeown, and 24-year-old Taylor Ruck would all have swum under the 2019 world record, nearly surpassing the 2:03-barrier.

At the current pace Smith is going at, especially with a 4-year Stanford career ahead of her, she could potentially hit 1:59 earlier than we think. Simply applying the 0.83-second time drop per year to Smith’s world record, she would hit 2:00.03 by 2024.

It would be rather plain to predict this outcome for the 2021 Olympic 200 back final: Regan Smith wins with a sub-2:00 world record while Kaylee McKeown and Taylor Ruck take silver and bronze with respective national records. However, the outcomes of the 2017 World final versus the 2019 World final morphed a new international women’s 200 back scene where US/Aussie teens are now dominating the world top 10 in 2020. Only 3 Olympians make up the top 10 times in the world alongside 6 teenagers (yes, six).

Kaylee McKeown currently leads the 2020 world rankings with her sub-2:06 January lifetime best swim of 2:05.83, followed by another sub-2:06 swim from No. 2 Regan Smith (2:05.94). Kathleen Baker, who won Olympic silver in the 100 back, and Marghertia Panziera, who just missed the 2019 World podium, are also in the top five times. Olympic medalists Taylor Ruck and Emily Seebohm also make the top 10 times in the 200 back while Kylie Masse, more of a 100 specialist, and Katinka Hosszu, who literally swims everything, are currently outside of the top 10.

Hold Up… What About Minna Atherton?

Revisiting the 2016-2021 Olympic cycle, sitting right outside the top eight 200 back times is another Aussie teen, Minna Atherton. At the 2019 Australian World Championship Trials, Atherton took an upset win in the 100 back and second in the 200 back behind McKeown. At the 2019 World Championships, Atherton was unable to repeat her 2:06.82 lifetime best from Aussie Trials and placed 6th in the final. After her breakout swims in summer 2019, Atherton only began to shoot upwards when debuting with the ISL’s London Roar in fall 2019.

Once Atherton was with the Roar, she instantly became a successful backstroker for the squad. At ISL London (European Derbies), Atherton swam her second sub-2:00 SCM 200 back of her career with a 1:59.25, just missing Hosszu’s 2014 world record by 0.02s. Her current SCM best would translate to a 2:01.65, but of course she had 4 extra underwaters in the short pool. This season, she is 9th in the world at 2:08.59.

Eh I’m not sure you can apply that methodology to Regan Smith’s 200 back. I think the law of diminishing returns strikes pretty hard in this scenario. Instead of dropping 0.83 seconds per year, repeatedly, I bet that it would look more like 0.83, 0.4, 0.15, 0.04 in 4 years. This is simply considering that Missy Franklin and Regan Smith are the only ones to accomplish the feat of 2:03. I’m doubtful 3 seconds will come off that, so quickly.

There are some thresholds that are just not broken. No one has swam under 2:05.68 in the women’s 200m backstroke wearing a textile suit except for Missy Franklin and Regan Smith.

Factoid: While you may be correct about the law of diminishing returns, only Regan Smith has been under 2:04 LCM.

Thank you for the correction, that’s my mistake for not checking my facts.

**It would be rather plain to predict this outcome for the 2021 Olympic 200 back final: Regan Smith wins with a sub-2:00 world record**

This prediction is not “plain” by any means, in fact it may be the most out-there prediction I’ve ever seen on this site.

The question is whether it’s even remotely possible. She’s on a steep improvement curve; if, in a Peaty-esque manner, she *somehow* whittled her 100 back down to 56 mid, could she go out 58 mid and come back 1:01 low?

I’d really like to see Regan Smith try her hand at SCM swimming. She’s great at LC and SC so I think it would be a good transition

I am by no means saying that this is impossible, but the prediction that Smith will be under 2 in 4 years is just insane and unrealistic. Things like stagnation, plateaus and struggles exist.

Especially for women, who on average see less time drop after the age of 18 than men.

At that level, consistently dropping nearly a second a year over 200 is insane.

I’d bet Baker rebounds to drop to a 2:05. She’s got an almost unrivaled work ethic and it seems some aging swimmers have been hitting best times after coming back from a setback.

I’ll be amazed if a woman swims a 1.59 200bk before 2050. It’s always better to look at the ‘pack’ than the freakishly talented leader. In 1991 Kristina Egerszegi broke the 200bk WR by over 2s aged 17. She was a generation ahead of her peers, the pack was so far behind that Egerszegi would still be competitive with todays ‘pack’. I think we see a similar situation with Smith. It will take 20+ years for the ‘pack’ to be in the 2.02/2.03s range, and I can’t quite fathom a woman swimming 1.59 when the rest of the world are still swimming 2.05+.

And Regan just does the same fundamental stroke as everyone else really well.

The way Peaty swims breastroke is unique, so his chances of a monster gap are higher.

Whilse not officially a WR of course, isn’t Dressel’s 17.63 like 4% faster than anyone else?

Though I have no doubt that if prime Manadou or Leveaux swam yards the gap would be smaller.

Second fastest is a close to prime cielo. I don’t think leveaux would close the gap. Manaudou yea I think could get close to sub 18. But also remember that Flo was peaked for his 20.26 while Dressel took it out at a meet he was likely not tapered for and had swum multiple races before.

I think prime Leveaux could have been close to sub 18. He still holds the SCM 100 free WR, and if I remember correctly he has one of the two ever sub 20.00 SCM 50 splits.

Maybe isolation is sending the author around the bend.