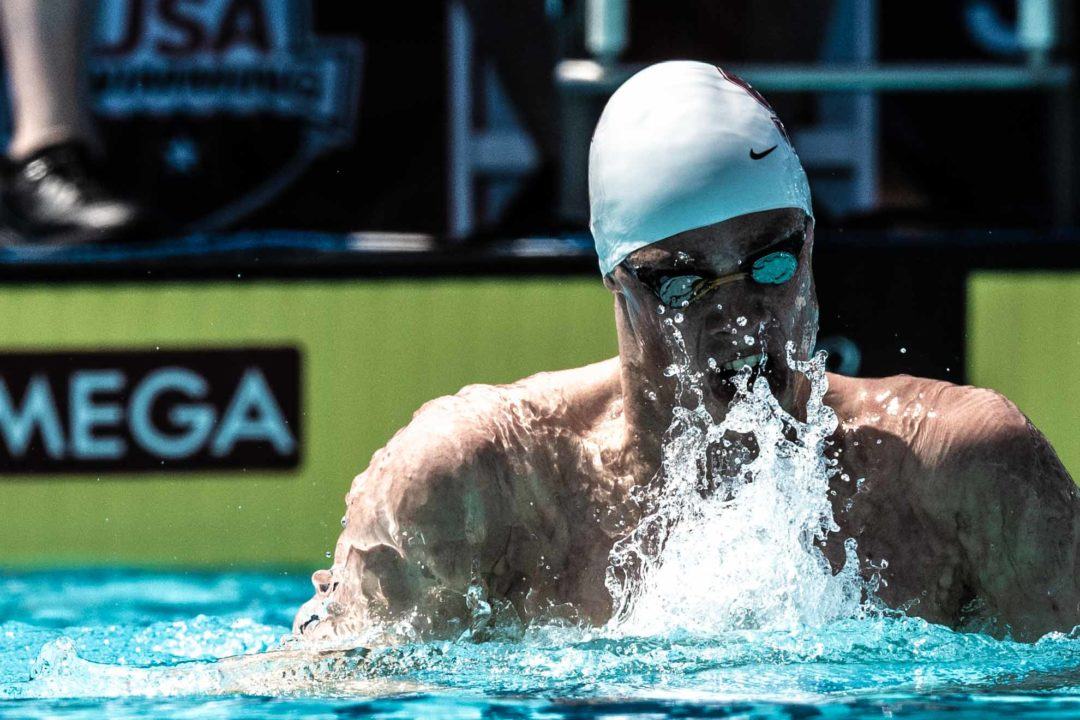 A 2019 graduate of Stanford with a degree in human biology while maintaining a 3.63 GPA, Anderson is a six-time NCAA All-American. Archive photo via Mike Lewis/Ola Vista Photography

After a quiet pandemic, Laticia Transom swam what appears to be her first official race in 16 months on Thursday, winning the women’s 100 free.

STANFORD, Calif. – Matt Anderson and David Jessen have been awarded NCAA Postgraduate Scholarships this week for their academic and athletic achievements.

NCAA Postgraduate Scholarship winners receive a one-time grant of $10,000. To qualify, they must be in their final year of eligibility and plan to pursue graduate studies within the next year. In addition to maintaining at least a 3.2 grade-point average, candidates must perform with distinction in their sport and be nominated by their institutions faculty athletics representative.

Throughout his four years on The Farm, Anderson was heavily involved in the movement to spread awareness about mental health. Anderson helped plan and organize the first annual GameFACES, a platform for Stanford student-athletes to share their stories about mental health. Anderson also served as co-president of Cardinal RHED, a group dedicated to improving the lives of student-athletes on topics of mental health prevention, wellness practices, body image and injury, from 2016-19.

Anderson served as Stanford’s Student-Athlete Advisory Council (SAAC) representative at a conference with the Pac-12 in 2018, which involved the development of leadership programs and conference legislation. A student ambassador and fundraising coordinator with the Movember Foundation during 2018-19, Anderson represented Stanford at the 2018 APPLE Conference, which was aimed at preventing substance abuse on Stanford’s campus.

In 2018, Anderson served on a student-athlete panel to celebrate National Girls and Women in Sports Day, and was one of four current student-athletes to participate in a panel with the University’s Board of Trustees in 2019. Anderson has also participated in annual events such as Cardsgiving, a thanksgiving-theme outreach program to promote physical activity for children in the Palo Alto area, A, B, Trees, an event promoting literacy for under-privileged kids in the Bay Area and Reading Bonanza, an event in East Palo Alto promoting reading among youth.

Jessen was a finalist for the 2020 Nissen-Emery Award, presented annually to the top senior gymnast in the nation. A 2019 All-American on high bar after registering a 13.930 to place fourth at the NCAA championship, Jessen helped guide the Cardinal to the 2019 NCAA title. Internationally, Jessen is a member of the Czech National Team and competed in the all-around at the 2016 Rio Olympics, where he placed 35th overall on high bar. A four-time Czech National Champion, he has a pommel horse skill (The Jessen) listed in the Code of Points after successfully performing the skill at the 2019 Apparatus World Cup in Doha, Qatar.

The four-time CGA First Team All-America Scholar-Athlete carries a 3.72 GPA and will graduate with a degree in Molecular, Cellular and Developmental Biology this spring. After graduation, Jessen will train to once again represent the Czech Republic at the Tokyo Olympics in 2021. He also plans to go to medical school and become a doctor after the completion of his competitive gymnastics career.

Throughout his time on The Farm, Jessen has helped coordinate the Lucile Stanford Packard Hospital prom, volunteered at Stanford Health at the Lane Surgery Center, and at Heart and Home – an organization providing shelter for homeless women. His work in the classroom also includes research in the Giocomo Lab in the neurobiology department.

For his efforts across multiple disciplines, Jessen was presented with Stanford men’s gymnastics’ Stanford Award at the conclusion of the 2020 season. The award is presented to the Cardinal gymnast who best represents the program’s values in all settings: training, competition, the classroom, on campus and in the community.