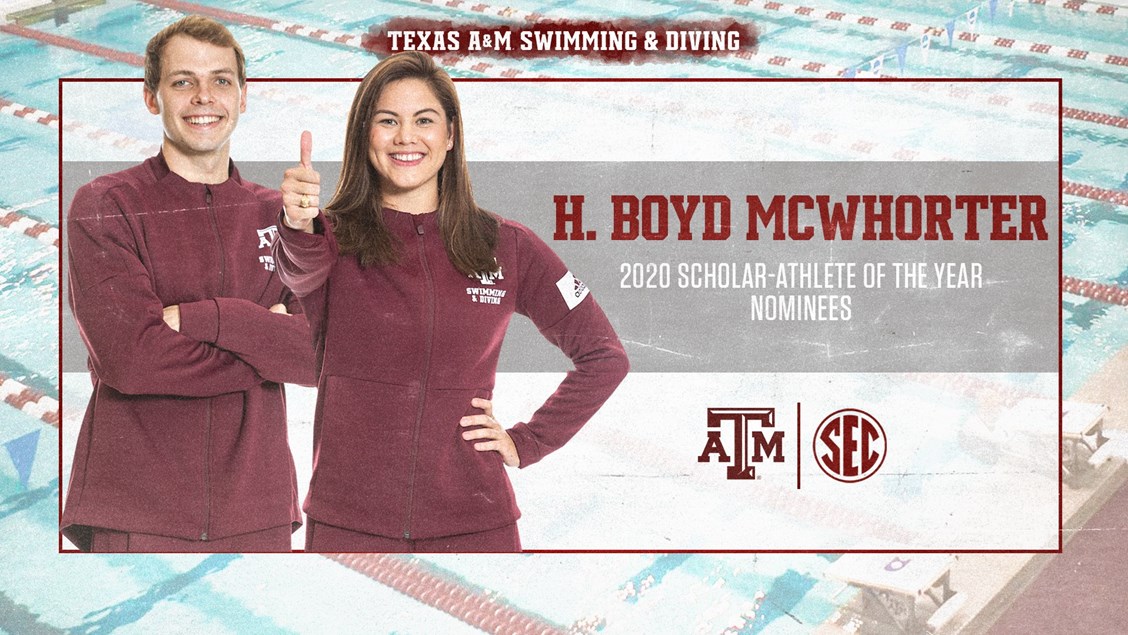 The SEC will name the 2020 recipients, chosen by a committee of Faculty Athletics Representatives from the 14 SEC institutions, in late May. Current photo via Texas A&M Athletics

BIRMINGHAM, Ala. – Seniors Raena Eldridge and Benjamin Walker of the Texas A&M women’s and men’s swimming & diving programs have been nominated for the H. Boyd McWhorter Scholar-Athlete Post-Graduate Scholarship.

The H. Boyd McWhorter Scholar-Athlete Post-Graduate Scholarship has been presented by the Southeastern Conference since 1986 to the league’s top male and female scholar-athletes. The SEC will name the 2020 recipients, chosen by a committee of Faculty Athletics Representatives from the 14 SEC institutions, in late May.

Eldridge recently earned her degrees from A&M, majoring in animal science and genetics. The Rockwall, Texas, native has garnered CSCAA Scholar All-America honors every year of her career, while also being named to the SEC Academic Honor Roll each season. For the second straight year, Eldridge was awarded Bill Erwin Scholar-Athlete of the Year honors, recognizing the top male and female student-athletes at Texas A&M who balance athletics and academics while maintaining above a 3.25 GPA, at the recent Building Champions Awards. Eldridge has served as a project leader for the Aggie Research Scholars Program and as a Student Technician of the Genetics Research Lab. Eldridge captained the women’s squad as a junior and senior, and earned CSCAA All-America honors twice, while helping her team to three straight SEC Championships.

Walker recently earned his degree in accounting from the Mays Business School. He was a two-time CSCAA Scholar All-American and has earned a spot on the SEC Academic Honor Roll in each year of his career. Walker, who hails from The Woodlands, Texas, made A&M history as a junior when he became the program’s first individual swimming SEC Champion, winning the 200 Breast. He again claimed gold in the event with a school-record time of 1:51.92, while helping both medley relay teams to podium finishes at the 2020 SEC Championships. The three-time CSCAA All-American also holds the Texas A&M all-time school record in the 100 Breast, and was part of the record-holding 200 and 400 medley relay teams, both setting a new program mark at this year’s SEC Championships. A team captain in his final season, Walker helped A&M move up the dual meet rankings, rising as high as fourth for the team’s highest ranking since the 2001 season.

Couldn’t agree more!! Congrats to both of you👍👍