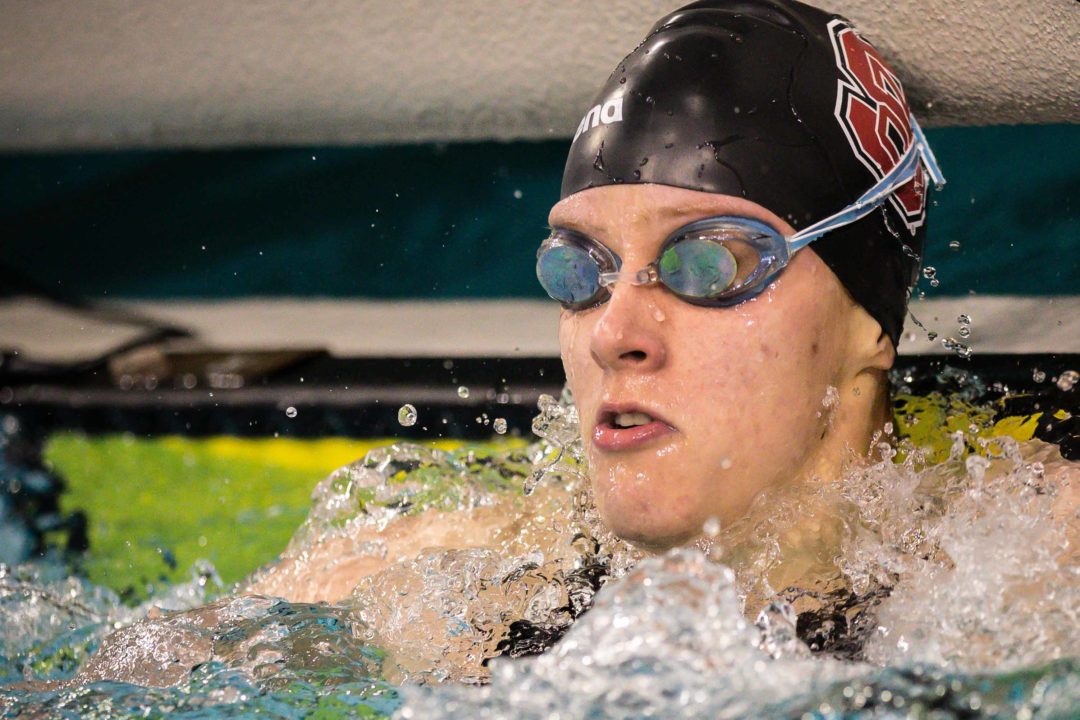 The NC State women recorded the fastest time in history to win the NCAA title in the 400 medley relay on Thursday night, becoming the first team ever to go sub-3:25.

That swim from the Cardinal remains the American Record, as Hansson is a native of Sweden.

Berkoff’s lead-off time was a personal best by over three-tenths (previously having been 50.40), and Hansson’s split was almost half a second under her flat-start PB (57.45), and makes her the second-fastest woman ever on a relay, with Lilly King having split sub-57 10 times.

Anchoring the team was Julia Poole, who split 48.22, over six-tenths under her best of 48.84. Absent from the Wolfpack this week is Heather MacCausland, who split 48.16 on the relay at ACCs.

Placing second was NC State’s ACC rival Virginia, the pre-race favorites, who narrowly missed setting a new American Record in 3:25.13. The Wolfpack were a full two and a half seconds faster than the Cavaliers over the first 300, leading UVA to run out of room despite a scintillating 46.31 anchor leg from Kate Douglass.

Cal initially placed third, including a 49.95 fly split from Izzy Ivey, but they were disqualified after anchor Emily Gantriis jumped early.

The NC State victory marks the first women’s NCAA relay title in school history, and also the first women’s swimming title overall. The only other female title in championship history was won by diver Kristin Davies on Platform in 2009.

I’m a UVA fan, but props to NC State and Julia Poole. That was a barnburner!

I was about to say the men have already…. But i can’t recall a Medley relay title, just freestyle.

Correct. It is literally the fastest…

Each swimmer will be back next year😳

It’s was gutsy! Douglass had me scared to death. 😂

What was UCLA specifically DQd for? Results say stroke infraction swimmer #4. Only thing I could think of would be a 15 mt violation.

I didn’t see what she got DQd for it but usually when they go past fifteen it says 15m violation. It says stroke infraction, which for a freestyle leg is probably underwater kicking on her back. Need to go back and watch but that’s my guess

What a great relay! That fly leg was excellent 😁

Congrats to the Pack. Props to Braden for being a great overall coach for both the men’s and women’s teams. Making them nationally relevant again 🙂