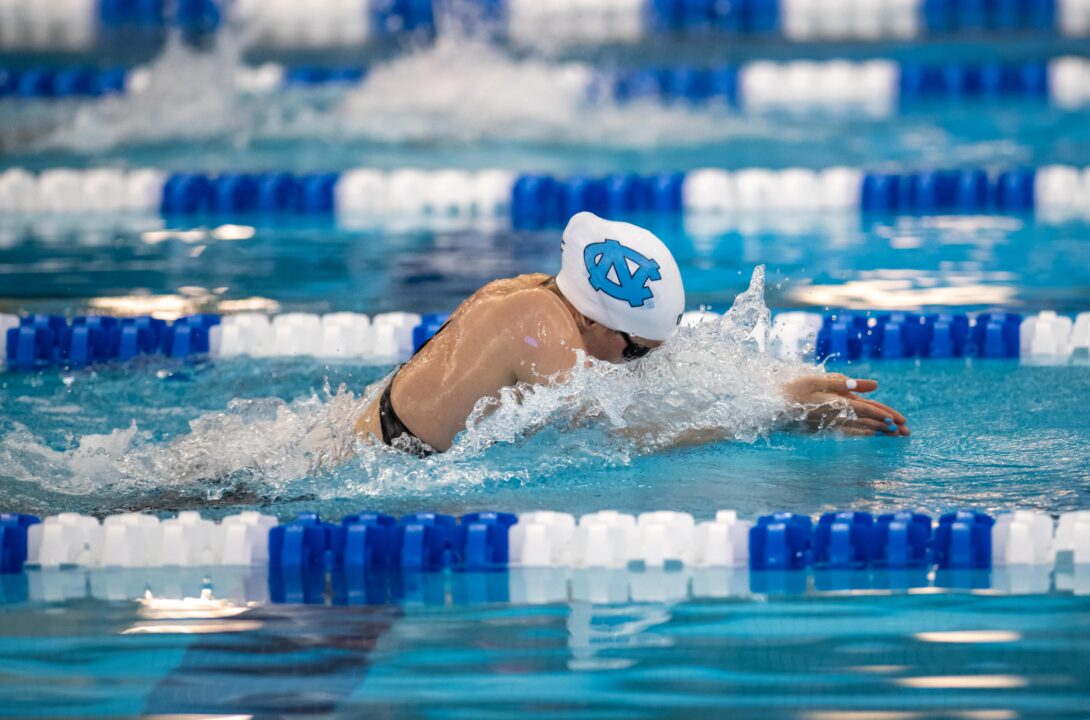 The UNC Tar Heels were the biggest risers from our final edition NCAA Power Rankings, moving up 9 spots to crack the top 12. Current photo via Luke Jamroz Photography

The 2021 Women’s NCAA Swimming & Diving Championships are in the books, and it’s time to look back at how well our Power Ranks predicted the finish order.

First, here’s a link to our Power Ranks (with explanations of each pick), plus some of the key data points we used in creating them:

Points are included, and change from our power ranks is noted in red, green, or black based on falls, rises, or holds:

Let’s start with the bad: one theme is very clear. In multiple cases, we relied too much on historical precedent, overrating some long-time NCAA powers at the expense of less-established, but rising, programs.

In fact, we overrated the three teams who have combined to win the past nine NCAA team titles: California, Stanford, and Georgia. Those were our three biggest misses inside the top 10.

A few other teams dropped significantly from our power ranks. Missouri is kind of a special case, as we hadn’t yet had a season to evaluate the new coaching staff under Andy Grevers, nor to see the effects of the team’s high-profile decision to suit up in technical suits for every meet.

The big difference for Florida was relay points – they scored 56.5 individually, almost identical to the 55 they were projected via psych sheets. But 46 seeded relay points dropped to just 28, and that margin dropped them out of the top 15.

Kentucky moved down two spots, but it’s worth noting that the Wildcats were just 7 points away from finishing exactly where we had ranked them – things got very tight in the 9-12 range.

Plenty of teams exceeded our expectations. Some, we should have seen coming. NC State had the second-most psych sheet points, besting Cal by 25. We leaned a little too heavily on Cal’s historic track record of great NCAA showings, when ultimately NC State outperformed the Golden Bears and beat them by 64.

Again, our trust in the ‘big-name’ programs caused us to predict that Georgia would make up about 43.5 psych sheet points on Alabama. We were wrong: the Crimson Tide (who also outswam our SEC predictions) fell a little short of their psych sheet points, but fell off far less than Georgia. Alabama: you guys can legitimately call yourselves the ‘nobody believes in us’ team of this year, because you consistently proved doubters wrong.

Ohio State and Michigan each picked up spots from our Power Ranks. Two spots apiece was due to Georgia and Stanford far underperforming our predictions. But the Buckeyes and Wolverines both swam very well and trounced the two former team champs convincingly.

A few other standout teams:

Picking the champions right is always a big piece, even when psych sheet scoring is pretty solidly in their favor. Virginia clearly proved it on meet day.

Texas ended up third – it wasn’t easy for us to project the Longhorns that high, even with the #4 overall spot in psych sheet points. Texas hasn’t always backed up their psych sheet points come NCAAs, but did feel like a team with a much more stable scoring floor this year. We factored in diving pretty accurately for Texas, too.

Louisville ultimately finished one place higher than we projected them, but only by half a point. To our credit, we also had Louisville much higher than psych sheet scores would have indicated – they were just 16th in psych sheet scoring with no diving presence to speak of. We ranked them 14th and they wound up 13th.

We factored in a handful of diving-heavy schools late in our top 25. Though we didn’t always hit the right schools, the instinct to account for diving was a good one. The three teams to jump into the top 25 who weren’t there in our Power Ranks were all diving-heavy schools, and all were ranked in our honorable mentions: Miami, Minnesota, and Arizona.

UVA will reign through the next many years, especially with gretchen walsh coming in

I know there was a 2 year gap, and the circumstances with training and redshirts/deferments are a huge factor…but has there ever been a defending champ fall from 1st to 9th?

Nope. There’s so little parity in college swimming, we often see these stretches where the same teams are the top 2-3 for years on end, so don’t normally see those kind of falls. In fact, in the vast majority of women’s NCAA seasons, the defending champion has finished 1st or 2nd the next year.

Biggest prior drops were:

There have only been about 5 or 6 occasions where the defending champions weren’t 1st or 2nd the next season. Haven’t looked through men’s (it’s a way… Read more »

I think you all did very well with your predictions in a really really really strange year. And it was fun to read every step of the way!

I don’t think Georgia had a single best time. Disappointing given a lot of those ladies qualified in December.

Agreed. U didnt seed Georgia badly. They just didnt swim well. They should have been top 5