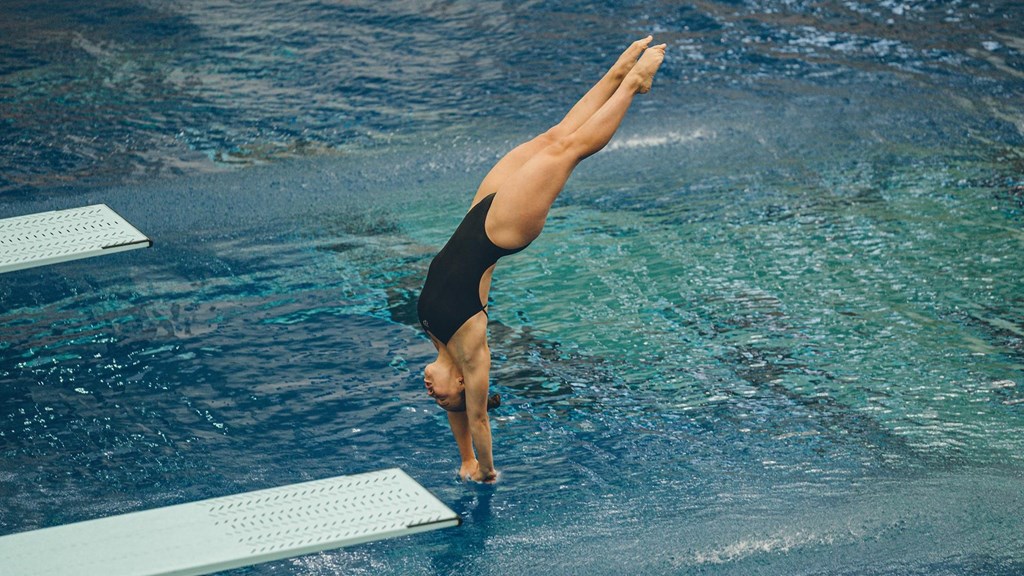 Texas leads all women's teams with four qualified divers and 9 total event entries. But Purdue and Indiana should also score big on the boards. Archive photo via Purdue Athletics

For the purposes of projecting the team battle, we’re making some rough stabs at which teams will benefit most from diving. These projections are very fuzzy – without an NCAA meet last year, we’re mostly relying on 2018 and 2019 NCAA finishes, Zone performances this year and last year, and conference showings.

The bottom group isn’t an exhaustive list, as we’ll probably see more teams scoring some diving points. But we want to highlight the groups that could/should score enough to make a visible impact on our team projections. These teams are ranked by their overall diving scoring, not as individuals – and the teams are probably projected a bit closer to their dive scoring ceiling than their floor:

Texas: The Longhorns have the nation’s biggest dive group with four invitees and nine total events. They should pile up points, particularly from double Big 12 champ Paola Pineda.

Indiana: Freshman Anne Fowler won Big Tens on 3-meter and won the tough Zone C on both springboards. She could be anywhere from a strong A-finalist to an NCAA title contender. Fellow freshman Tarrin Gilliland was also strong in tough conference and Zone fields.

Nebraska: Nebraska’s two divers went 1-3 at Big Tens on 1-meter, and Abigail Knapton won the platform event. Both Knapton and Sara Troyer are A final contenders.

Minnesota: Coming back from a redshirt season, Sarah Bacon might be the favorite to win both springboards.

Arkansas: Bacon and Arkansas’ Brooke Schultz are probably the frontrunners for the top overall diver of the meet. Schultz was 2nd in 2019 and 1st in 2018 on 3-meter at NCAAs.

Arizona: So far this season, Delaney Schnell has been awesome, winning Pac-12s on 1-meter and Platform and winning both boards in Zone E. She’s a title contender on platform after finishing 4th there in 2019.

Ohio State: Ohio State’s divers were somewhat quiet at Big Tens, but Mackenzie Crawford was the Big Ten champ a year ago on 1-meter. Freshman Ciara McGing is a platform specialist but one of the best out there.

UNC: Freshman Aranza Vazquez won two events at ACCs and finished second in the other. The only question left is how that ACC field stacks up nationally. Regardless, she should score very well.

Minnesota’s Sarah Bacon won the last two NCAA titles in this event and dominated a tough Zone D. She’s the favorite, though Arkansas’ Brooke Schultz is a returning A finalist who was 4th in 2019.

Miami’s Mia Vallee was in line to score last year before the cancellation, and won ACCs this year.

Schultz was 2nd on this board in 2019 and 1st in 2018. Though she was just 5th at SECs, it seems like the top-tier divers are still tuning up through the conference rounds and usually save their best stuff for NCAAs.

Bacon has been a two-year A finalist here for the Golden Gophers. Indiana’s Fowler won Big Tens, besting 2019 NCAA scorer Knapton of Nebraska.

Once again, Knapton (5th in 2019, 8th in 2018) figures to be a frontrunner. Florida International’s Maha Gouda is a returning A finalist from 2019. But Arizona’s Delaney Schnell might be the favorite as the highest returner from 2019. She was 4th that year, and won Pac-12s and Zone Es this year.

Is NCAA like the conference champs with 24 scoring positions or are there only 16?

Only 16 at the NCAA Championships in all events, including diving.

0
0
Reply
The pressure is on

The wild card missing from this excellent analysis is Ms.Jocelyn Porter of UVA who has the lines, the DD, and the experience to put UVA on your map and in the “strong performers” category no less.

Ms. Jocelyn Porter comparatively to the qualifiers from every other zone, neither her DD or scores place her in a point scoring position. Not a jab because I’m sure she is a beautiful diver, just providing facts.

Porter is definitely one who is intriguing to me. She dove great at Zones and was in the top 3 in all of her events. The problem with projecting anything too optimistic for her yet is that both Zone A and the ACC are relatively soft diving fields with very few returning NCAA scorers – so it’s hard to compare her to her real competition for scoring spots, mostly divers in the Big Ten and Big 12.

Excellent synopsis of the water jumpers at NCAAs