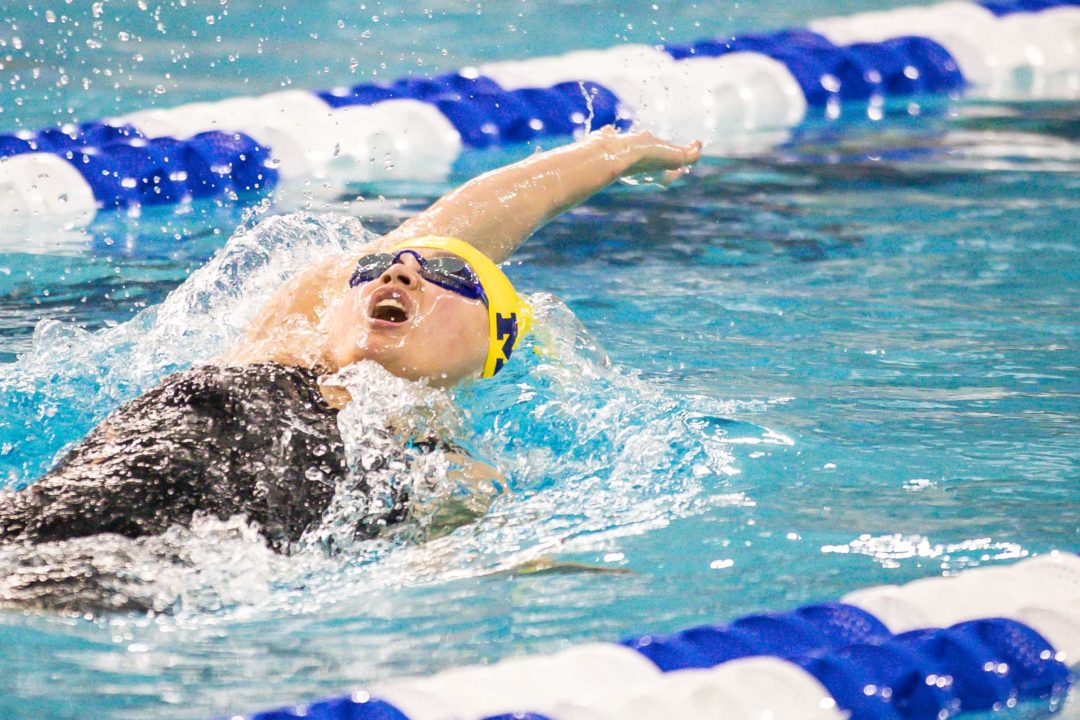 The first NCAA Division I Swimming & Diving Championships didn't disappoint, and here's our take on the moments and people which stood out to us last week.

We’ve had a couple days to catch our collective breath after the excitement of watching fast college racing again last week. While we’re busy gearing right back up for the men’s championships, which start Wednesday, we wanted to share a few of our thoughts on what stood out to us last week. None of these are cut and dry, so if you have your own opinions (and we know you do) feel free to share your comments below. Keep in mind, though, that no one gets any money from our hypothetical awards, or will even probably add these titles to their Instagram bios, so please try to keep the vitriol to a reasonable level.

Note: the CSCAA Awards will be given out on Tuesday.

Look, we love it when this choice is easy, and this time it’s not. This is one of the awards that is by nature a bit subjective, and we’ve already seen some chatter in the comments. In the end, it’s really a subjective philosophical judgment — do you go with the swimmer who won more events, or a  swimmer who had the the more impressive win(s)? Some years, a Katie Ledecky or Caeleb Dressel makes this is an easy decision.

It’s hard to ignore the fact that Virginia senior Paige Madden came away with three individual event victories, and initially, we were going to (in our imagination) hand her this trophy. But, upon further reflection, it’s even harder to ignore what Michigan junior Maggie MacNeil did this week.

Despite having training interrupted just a few weeks ago due to university-wide Covid precautions, MacNeil was on fire at this meet, winning two of the three head-to-head battles with UVA’s Kate Douglass. In the 50 free, her first individual event, she took 2nd, and only by 0.04s. Later that evening, she led off Michigan’s 400 medley in 49.76, making her the second woman to go under 50 in both the 100 back and the 100 fly.

MacNeil didn’t just win two races, she did so against arguably the best and deepest fields in the whole meet. Besides Douglass, she squared off with, and beat, swimmers like Isabel Ivey, Rhyan White, and Kylee Alons, who in different years could all be Swimmer of the Meet candidates.

Runner-Up – Paige Madden, Virginia – We know that some of you feel like Swimmer of the Meet should go to the swimmer who won the most races, and we totally understand that thinking, and if there was any money or hardware associated with these awards, we’d get you being upset. But there’s not, and there’s no denying that Madden had an incredible meet. She came into college as the #18 recruit in the class, with some very solid times, but has steadily improved, culminating in her triple victory this year. She won the 500 free with a 4:33.61, winning by nearly 1.5s, then won by over a second in the 200 free,  with a 1:42.35, and closed out her individual events with a 15:41.86 in the 1650, an event she only really picked up her junior year. Madden added in a 1:41.63 split on UVA’s victorious 800 free relay, and also split 47.98 on Virginia’s 2nd-place 400 free relay after winning the 1650 earlier in the session.

One again, this feels like it could either way, as a couple divers actually scored a couple more points that Bacon did, since she didn’t contest the platform event. But, she did go two-for-two in the two events did swim, winning  the 1m with a score of 357.20 and the 3m with a score of 408.60

Runner-up: Aran Vazquez-Montano, UNC – Vazquez-Montatno was one of two divers who scored more points than Bacon, and there’s a strong argument to be made for her here, as she took 2nd place behind Bacon on the 1m and 3m, and added a 6th-place finish in the platform, for a grand total of 47 points.

Runner-Up: Alex Walsh, Virginia – Walsh was the 3rd-highest scorer for the NCAA champions, and was the only freshman besides Bacon to win an individual event. Her 1:51.87 in the 200 IM was a bit off of her time from ACCs, but still plenty enough to win by over a second and a half. Walsh displayed her versatility by A-finaling in three different disciplines, as she took 5th in both the 200 free and the 200 breast, and swam on all three of Virginia’s free relays, earning another NCAA in the 800 free relay.

Again, we realize this is a pretty subjective award, and it’s tough to definitely proclaim the best coach from the outside looking in. And we’d certainly be the first to acknowledge that there are many great coaches in the NCAA, and they all put forth a tremendous effort in making through what may be the weirdest, most difficult season in at least the recent history of college swimming.

But, you can’t really ignore what UVA did this week. Less than four years after taking over, and with only two of his own recruiting classes, DeSorbo and Company have transformed the Cavaliers into a juggernaut. UVA has been swimming fast all season long, and while they didn’t necessarily swim a lot faster here, they swam plenty fast enough to get the job done. Virginia put an A-finalist into every event, finished 1st or 2nd in every relay, and ended up winning by 100 points. We expect teams like Cal and Stanford to come back stronger next year, but Virginia seems to be on a trajectory to contend for a national title every year for the foreseeable future.

Runner-Up – Braden Holloway, NC State – While UVA was widely expected to win, NC State looked to be about a 4th or 5th place team heading into the meet. And while you could argue that Cal and Texas stumbled, the truth is that the Wolfpack came ready to rumble. One of the clearest examples of this is the 400 medley relay, where NC State finished 2nd to Virginia at ACCs, but knocked over two seconds from their performance last month to swim the fastest time ever by exactly half a second.

The real issue here is that Sophie Hansson deserves more praise. Taking nothing away from MacNeil and Madden but there results didn’t really surprise me but were rather expected. For example, when MacNeil went 49.26 to tie Louise Hansson, she did it in season. There was no doubt in my mind she wouldn’t beat that time. I don’t think many were expecting Sophie to go a 2:03 200 when she’s know to be a sprinter and hasn’t had any success in 200 outside NCAAs/yards. I’m not saying that 48 fly is less impressive than a 2:03 on the basis of time, but relative to who swam it, I’d argue that Hansson deserves more than an honourable mention. A good comparison… Read more »

Predicting success shouldn’t detract from it.

Agree that Hansson was fantastic, but your analogy doesn’t resonate with me because I would say Sjostrom’s Gold and WR were more impressive than Blume’s 50.

No one is saying Paige Madden’s performance was bad or her wins were underserved. The article (and most of us swimfans) simply recognize Maggie’s swims as a better performance. You can argue that Paige won more points or that distance events have been affected the most by covid, but the award says “best swimmer of the meet”, not “more points scored” or “more dificulties overcome”.
Maggie was outstanding, so did Paige, but there can only be one winner

How in the heck is Sophie Hansson grouped in the honorable mention section. She has an argument for Runner Up. Undefeated individually against better comp. 2 relay wins along with a 3 and a 4.

All of these ladies really should deserve props. Through a very tough season they were able to go very fast times

It seems that all of these debates re: MacNeil and Madden boil down to quality versus quantity. MacNeil definitely gets the edge in terms of quality, and Madden wins in terms of quantity (4 titles and 60 individual points) but where I give Madden the edge is that she had a lot of quality behind her performances too and conversely MacNeil was lacking in quantity compared with Madden.

An intangible that favors Madden was that she was as calm and cool under pressure as I’ve seen any swimmer in a while. The announcers couldn’t even get over the fact that she seems to always find another gear when she swims her races, when she needs to. She is master… Read more »

From a numbers based perspective, there was very little quality from Madden’s swims. Her times just were not that fast in the history of the sport.
And MacNeil is lacking in quantity? Fastest time of the meet in 3 different strokes.

Let’s keep in mind that in a season impacted by COVID the distance times were most likely going to be slower via a vis history (not to mention any winning times will look pedestrian when compared to Ledecky). Maggie has amazing underwaters and had some lights out swims but all her races were sprint (50 and 100). Paige was far more impressive winning the 200 through 1650 and splitting a 47 on a 400 free relay. That range coupled with Paige’s consistency and leadership were amazing and deserving of swimmer of the meet IMO.

Evie looked great this year and on the men’s side…Smith, Magahey, Finke, Kibler, Julian, etc. all have been phenomenal in the 500 this year so not sure I agree that Covid is impacting distance times.
Maddens times also look quite pedestrian compared to Leah Smith.
But obviously we disagree. For me, MacNeil is swimmer of the meet and it’s not close.

The MacNeil argument still stands without Ledecky. Madden only put one swim in the top 25 performers of all time. Ledecky is only one person.
‘Leadership’ is not part of this discussion.

Well in regards to quantity I didn’t discuss where her times fit into historical rankings. I simply mentioned points and number of titles. That’s it.