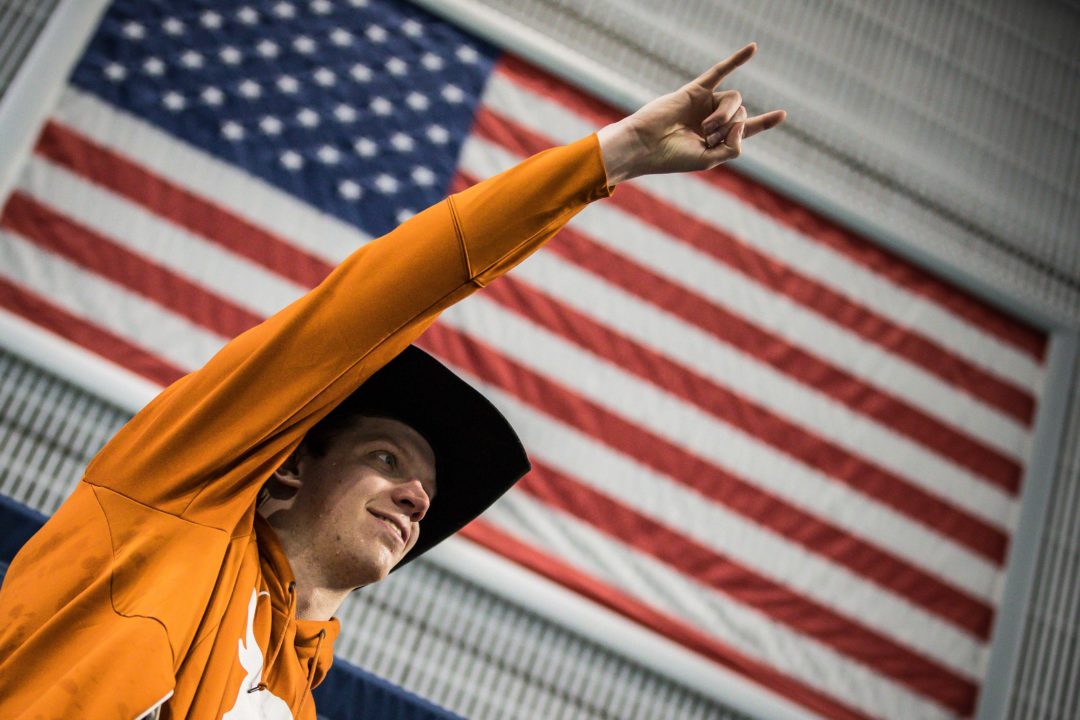 Texas enters the meet as the top seed by over 4 seconds. Stock photo via Jack Spitser/Spitser Photography

The 800 free relay will be the first event of the 2021 Men’s NCAA Championships, and will be our first chance to gain insight as to how each team may perform throughout the week. Texas are the defending champions in the event, as well as the top seed this year. The last time we saw the Longhorns swim this relay at NCAAs, they broke the NCAA Record.

Texas enters the meet as the top seed by over 4 seconds. The 800 free relay this year is actually an example of the somewhat rare instance of a team being the clear-cut favorites in an NCAAs relay. Texas has a truly incredible amount of depth in the 200 free this year. To put their depth in perspective, Texas has 10 of the top 50 swimmers who have raced an individual 200 free in the NCAA this season. UGA is next on that list with 5 of such swimmers, and no other program has more than 3.

The Longhorns’ season best 6:07.34 is from the Texas Hall of fame Invite from December. That squad consisted of Drew Kibler, Coby Carrozza, Jake Sannem, and Carson Foster, while their Big 12s relay (6:12.07) was Kibler, Foster, Sannem, and Austin Katz. Kibler, who is the 2nd-fastest 200 freestyler in the NCAA this year, and is the 2nd seed in the individual 200 free, will be instrumental to Texas if they hope to make a run at the NCAA Record. Kibler has been 1:30.57 flat-start this season, which is also his lifetime best. The 6:05.08 NCAA Record is an average 200 split of 1:31.27, so the further under that average split Kibler can start the Longhorns off, the more wiggle room it will give the rest of the swimmers in terms of chasing the record.

The non-Kibler legs of Texas’ relay are all very similar speeds. At mid-season, Carrozza, Sannem, and Foster were all 1:32.3 or 1:32.2. This does make things a little tricky for Texas, since they’ll probably want to use Austin Katz on this relay, given that Katz provided a 1:31.45 split on the record-breaking 800 free relay at the 2019 NCAAs. The decision for Texas will be which swimmer do they swap out for Katz, since Sannem, Foster, and Carrozza have all split within 0.11 seconds of each other this season. At Big 12s, they opted to leave Carrozza off the relay, which they may ultimately choose to do again, since Carrozza was the slowest of the splits, albeit by a razor-thin margin.

Along with Texas in the fastest heat of 4 will be Texas A&M, Cal, and Florida, who are all seeded within 0.61 seconds of each other. TAMU leads the way, with Shaine Casas in the driver’s seat. Although Casas is racing the 200 IM and backstroke events individually this year, he’s the 3rd-fastest 200 freestyler in the NCAA this season, and he will very likely be leading the Aggies off. Mark Theall, who was 1:32.52 on the 2nd leg at SECs, split 1:31.97 on the 2nd leg at the 2019 NCAAs, which already gives A&M some clear room for improvement. It will be up to Kaloyan Bratanov and Clayton Bobo to bring the Aggies home.

Cal is another relay that goes into the meet with clear space for improvement. The Bears swam a 6:11.98 at Pac-12s with a squad of Destin Lasco, Daniel Carr, Trenton Julian, and Zach Yeadon. Lasco led off that relay with a lifetime best of 1:33.28, while Carr was 1:34.22, Julian 1:31.52, and Yeadon 1:32.96. Bryce Mefford swam on the 2019 relay at NCAAs, where he split 1:32.57, so swapping Carr out with him would already put Cal close to 6:10 mark, provided that the other splits hold. Cal’s strategy will need to be one based on depth, since regardless of who they lead-off, it’s very likely they’ll be in 4th when the second swimmer dives in. Kieran Smith for Florida, Kibler for Texas, and Casas for A&M happen to be the 3 fastest 200 freestylers in the NCAA this season respectively, and they also are expected to lead-off.

Florida is the 4th seed, and earned that position thanks to a spectacular first half from Kieran Smith and Trey Freeman. Smith, who is the fastest 200 freestyler in the NCAA this season by a wide margin, led the Gators off in a lifetime best 1:29.48. Freeman backed that up with a 1:32.41, putting the Gators into the 400 mark in 3:01.89, which not only is the fastest front half in the NCAA this season, it’s actually faster than Texas was on the front half when they set the NCAA Record.

That being said, there’s a good shot Florida leads at the 400 mark, so how well the back half of the relay can withstand the other back half swimmers will determine Florida’s placing. Clark Beach went 3rd for the Gators with a 1:34.46, while Miguel Cancel swam a 1:35.89 on the anchor. There is, however, some good potential for improvement out of the pair. Beach has a personal best of 1:34.78 flat-start, while Cancel has a best of 1:36.34 flat-start.

The 2nd-fastest heat of 4 will consist of NC State, Stanford, Michigan, and UGA, all of which are seeded within 1.32 seconds of each other. NC State has a history of dropping from their seed in the event, and looks primed to do so again this year. Lukas Miller, a freshman, led the Wolfpack off in 1:32.55 at ACCs, while Hunter Tapp anchored in 1:34.16. Miller went on to swim 1:32.28 in the individual 200 free at ACCs, while Tapp went on to swim an 1:33.81 individually. That being said, Tapp should be able to swim around a second faster on the anchor this time around.

Stanford and UGA are similar to each other in that they are among the younger 800 free relay squads in the field. Stanford will be looking to its sole upperclassman, Grant Shoults, to lead them. Shoults split 1:33.75 at Pac-12s, a little off his flat-start best of 1:33.26. If Shoults is in top form bring Stanford home, it could be a game changer for the Cardinal. UGA has a squad of 2 freshmen and 2 sophomores. Freshman Luca Urlando led the Bulldogs off at SECs in 1:34.56, which leaves plenty of room for improvement. Urlando has a best time of 1:33.33, which he swam at mid-season of this year.

Michigan, also a young squad with 2 freshmen, a sophomore, and a junior, is a little harder to gauge. Of course, it’s been widely reported that Michigan was forced to quarantine for 2 weeks in late January into early February, ahead of the Big Ten Champs. They still managed to win the event, and the meet, at Big Tens, though the question of whether we should expect them to be faster this week remains. The only split that jumps out in terms of room for improvement is from Wyatt Davis, who anchored in 1:33.67. Davis has a flat-start best time of 1:33.68, which is from 2019. That lends itself towards Davis having the ability to go a tick faster on the anchor this week.

Darkhorse: Ohio State and Virginia are viable picks for surprise breakthroughs in this event, though both have a leg that probably keeps them from getting into the top 8. Ultimately this feels like a rather predictable race that will finish pretty close to seed order.

An okay team I suppose. Nobody can beat the FAU Owls in the 800 free relay but unfortunately, the NCAA banned them for being unstoppable in the event.

its going down… no question

Ole Sannem’ll do better than that I wager

I like how Sannem’s pic is in a USC shirt!

Kind of unrelated… but what would you say is the hardest event to predict? I would say 400 free relay. I also hope the team race comes down to that relay. OOOh that would be exciting

I agree that many of the relays were pretty hard to pick. For individual events, maybe the 100 fly.

For Florida, it looks like Miguel Cancel is not at NCAAs but swimming ISCA Senior Cup… I think…

Mestre’s flat start 200 from SECs was over a second faster than Cancel’s split on the 800 relay.