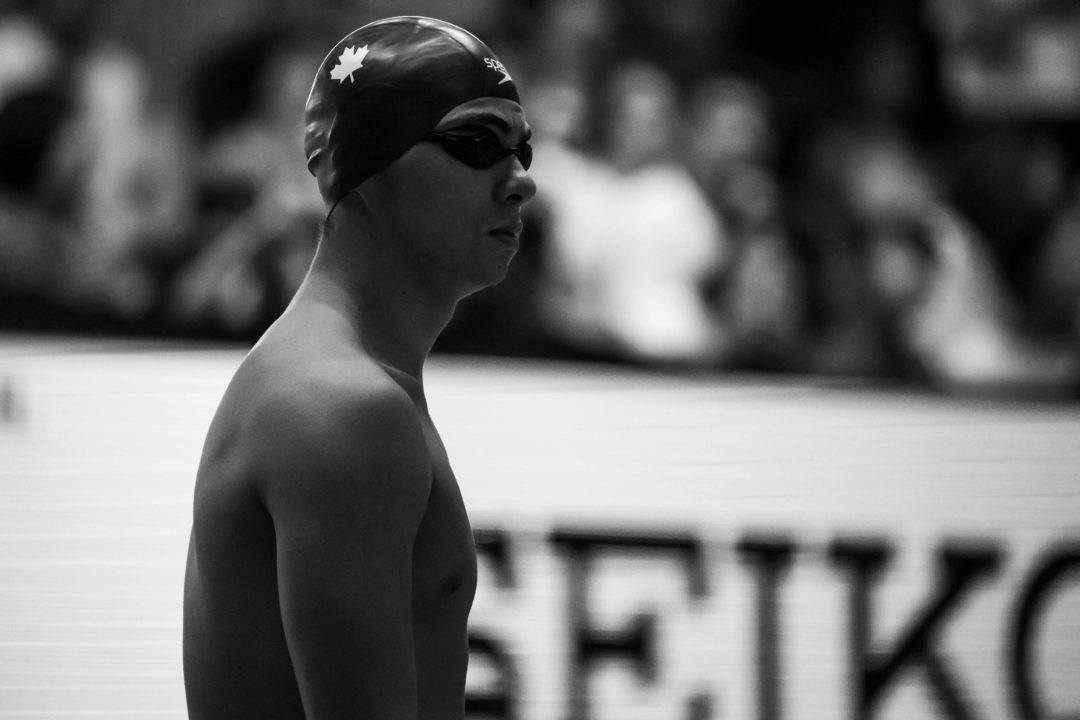 You don't often see a 200 backstroke A-finalist swim breast on a 200 medley relay, but senior Javier Acevedo was doing it all for Georgia last week. Current photo via Mike Lewis/Ola Vista Photography

While the NCAA Championships are over, and we’re starting to shift our attention to the long course pool for what will hopefully be a very fun summer, we’re not quite done sharing some thoughts from the exciting swimming in Greensboro. One thing we noted in a couple of our our “Quick Hits” section during NCAAs was how different teams have sought to maximize their relays points by rearranging swimmers, and one men’s team that notably did that was the Georgia Bulldogs.

Specifically, senior Javier Acevedo served as something like a Swiss Army knife for the Bulldogs. He’s primarily known as a backstroker, and he made the A-final in both backstrokes,  taking 7th in the 100 and 8th in the 200. But he also made the A-final in the 200 IM, and as an IMer her brings that kind of versatility that coaches dream of, and the kind that can help teams make the small tweaks they need to max out points.

We reached out to Georgia to ask them if this something they planned for, and got this response from Acevedo.

This is definitely something we have been working on since our invite in November. Luca [Urlando] swam a 45.5 100 back in practice the day after invite, so we always knew he was a good backstroke to replace me on relays. In terms of the 50 breast, following conference, I asked Jack if I could do a 50 breast because we were in need of a slightly faster split for that relay. I went a 23.6 with a takeover after practice. So, since then, we have always been prepared for Luca to go backstroke and me to swim breaststroke.

As Acevedo references above, part of Georgia’s relay flexibility has also come from the presence of freshman Luca Urlando, who is known primarily as a butterfly specialist, but like Acevedo, also is a great IMer and can fill in on multiple strokes. It’s more common to see someone like Urlando, and will swim either back or fly, but it’s becoming increasingly common to see more guys who are strong at both back/breast.

A great example of that is incoming Texas freshman Anthony Grimm, who’s been 20.8 leading off a medley relay, but also has a 52.5 100 breast, thanks largely to his very strong underwater kicking ability.

Still, even while it may becoming increasingly common for top swimmers to excel at back and breast, Georgia head coach Jack Bauerle appreciates the versatility that someone like Acevedo can bring, especially to a team that hasn’t recently been known for its prowess at the shorter relays. As Bauerle put it:

Javi’s importance to the our team this year cannot be overstated. His willingness to become a versatile swimmer upon arrival really changed our team, and it was most evident at the NCAA Championships. He learned how to swim the IM, and it was a process to the point where his weakest stroke, breaststroke, ended up being the fastest split in the 200 IM prelims. Because of his willingness to work on breaststroke, we had a top-eight 200 medley relay. It was difficult to decide where we needed him most, which is a big compliment to him. I felt very confident that he would be fast in anything we put him in.”

Acevedo’s multi-stroke prowess, plus a mix of veterans like Camden Murphy and younger stars like Jake Magahey and Urlando, helped propel the Bulldogs to a 4th-place finish, the Georgia men’s highest finished since they took 3rd in 1997.

Downing died in the 400 F-R at the end of the meet. Maybe he was really tired or hurt.

i heard they have an incoming freshman who hasn’t technically signed yet. He is a 18 year old sprinter from Norway, his name is Sugondez. I think uga will be really happy with him once he gets on campus. Big pickup for the bulldawgs

He wasn’t actually on the relay. He’s listed but it was Cam Murphy who had the 18.9

I think that was Camden who put up that split

Random fun fact: Tom Dolan swam the 50 breast on UMich 200 medley at Big10’s in 1996. He wasn’t that quick, 25 mid, but was prepping for trials more than anything else at that time (back when trials was in March).