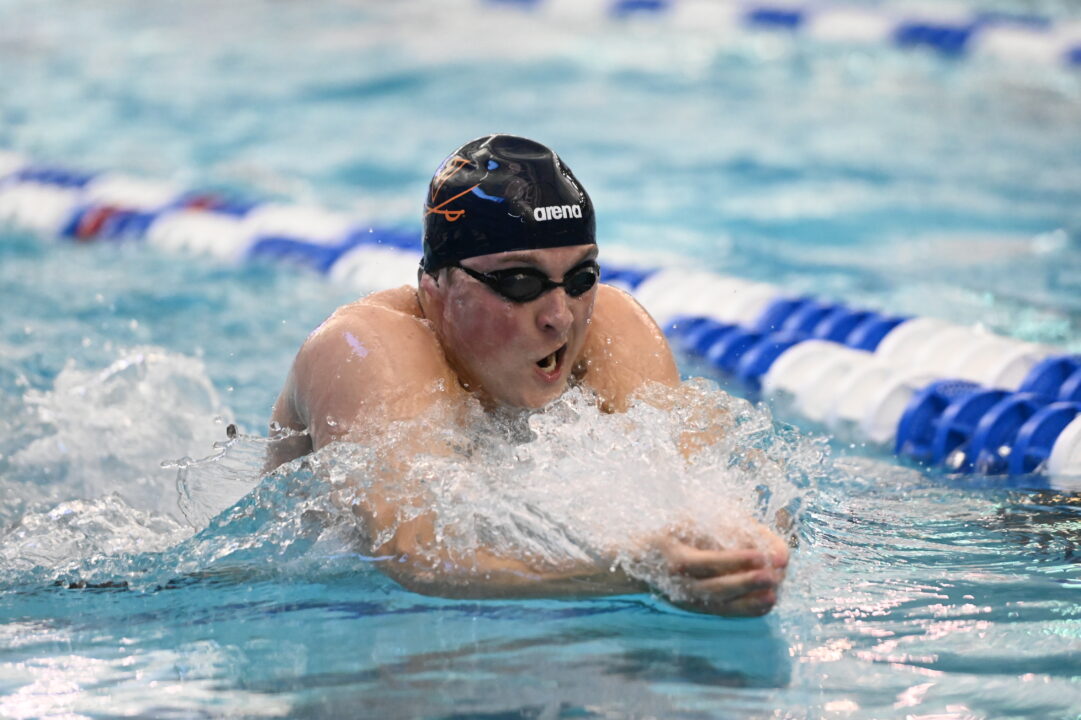 It was a memorable night in Greensboro, as the Texas Longhorns won the 2021 NCAA Division I Men’s Championship for the15th time.

The 2021 Men’s NCAA Swimming & Diving Championships are in the books, and it’s time to look back at how well our Power Ranks predicted the finish order.

First, here’s a link to our Power Ranks (with explanations of each pick), plus some of the key data points we used in creating them:

Points are included, and change from our power ranks is noted in red, green, or black based on falls, rises, or holds:

We had Ohio State beating Indiana. The big difference there was that Ohio State’s top three seeded scorers dropped sharply from their psych sheet points: Paul DeLakis from 44 to 23, Hunter Armstrong from 18.5 to 4 and Sem Andreis from 14 to 0. We probably should have relied a little more on our historical ‘change from seed’ data, in which Ohio State has generally fallen pretty steeply from seeded points at NCAAs.

Texas A&M fell two spots from where we had projected them, despite fan uproar that we were underrating them. (I guess it did indeed come out in the wash? Or it didn’t? I’m not sure how the expression logically concludes when they were wrong but we were also wrong). In all fairness, A&M was a single point out of 9th and only 13 points out of where we had projected them.

Michigan dropped a little, but that was somewhat due to Virginia and Virginia Tech rising.

The biggest droppers were Alabama and Georgia Tech. For the Crimson Tide, Matt King’s disqualification out of his best event (the 50 free) probably cost the team double-digit points – enough to put them in the hunt for 12th, at least. But all four of their projected individual scorers dropped from psych sheet scores. That comes after Alabama’s women outperformed our power ranks last week. We probably overreacted to the Alabama women mostly over-performing last week.

Individually, Georgia Tech pretty much performed as expected. (Caio Pumputis and Batur Unlu actually matched their psych sheet scores exactly). But 36 projected relay points withered away to nothing as the Yellow Jackets were 17th in both medley relays and didn’t score any relay points.

Virginia was the biggest surprise, nearly doubling their psych sheet points. Keefer Barnum was the main driver, going from 2 psych sheet points to a whopping 26 total points scored with A final appearances in both breaststrokes. But the relays were the biggest point gains. UVA was seeded to score 28 relay points. They’d surpassed that after just two NCAA events were in the books, and wound up scoring 94 points across all five relays.

It’s especially impressive for Virginia given how well their national champion women swam last week. It seems rare for a combined-gender program to swim really well in both the women’s and men’s meets, but UVA clearly pulled off the feat. The Cavalier men don’t have the flashy names of their women’s program, and we overlooked just how primed they were for NCAAs.

Virginia Tech also jumped a spot – and that wasn’t a case of a few points. They beat Michigan and Arizona by almost 30, and even overcame a really key DQ to flyer Youssef Ramadan. We were too low on the H2Okies.

Arizona had a nice meet and climbed three spots from our ranks. That area of the finish order was densely-packed with teams close enough that a single swim could have shaken up the order. But that 12-17 range also featured a lot of teams moving up from our power ranks: Stanford and Mizzou both made good jumps from where we had projected them.

Miami got pretty much the diving haul we’d projected – but that translated to a higher finishing spot than we expected. Same goes for Tennessee.

Despite the protests of our commenters from Wisconsin, the Minnesota Gophers did indeed hold up their top 25 ranking, even outperforming our projection of 23rd place. We were pretty clear all year that we were essentially ranking the Minnesota Max McHughs, but that’s just how the NCAA format works when you’ve got one of the greatest breaststrokers of all-time on your roster.

SwimSwam as a whole is currently on the injury report with arm fatigue – from patting ourselves on the back too hard over accurately projecting the entire top 5. Picking Texas over Cal was the toughest call there, and that race very clearly could have gone either way. But Texas really did show up for NCAAs better than we’ve seen in several years, and their diving group very much held up the lofty projections we’d made for them. (Internally, we threw around numbers between 70 and 90 as we tried to predict Texas’s diving output, and they ended up scoring 83).

After somehow becoming the SwimSwam Diving Guy, the author of this story is especially proud that we got Purdue right, given how much of their scoring came on the boards. Diving is notoriously hard to project, without the aid of hard-and-fast times to compare between different meets and different seasons. We roughly predicted the Boilermakers around 50 diving points, though those projections really heavily depended on a single event, platform, with a lot of volatility. But Purdue did indeed score 52 diving points, and that was enough to get them 17th.

Ohio State dq’ed 400MR (6th place points) or would have finished where they were predicted to finish by Swimswam….just…..sayin’….

Why does the picture remind me of POPEYE?

It will be worth it if Mathews gets to Tokyo, though

In all seriousness, I’m sure he was more than happy to do it for his team

This has been SwimSwam’s motto toward VT since it first started writing articles. #SleptOn

If I see this from a team, I just assume they’re soft automatically.

1) You need SwimSwam to tell you you’re good? Just go out and swim the points that prove it.
2) It’s like you’re mad that you did well,
and
3) I saw on AJ Pouch’s Insta story last week him whining about SwimSwam not picking the freshman to win the 100 fly and we saw how that turned out.

Why don’t y’all ever come on here and say “shoot, we didn’t live up to our expectations, y’all were right.”

Love to see the Gophers getting carried.

No article on men’s elite 90 winner?

I just looked him up. 4.00 in Applied Math, plus military training. Jeepers!

Where is auburn? After the season they had I’m surprised