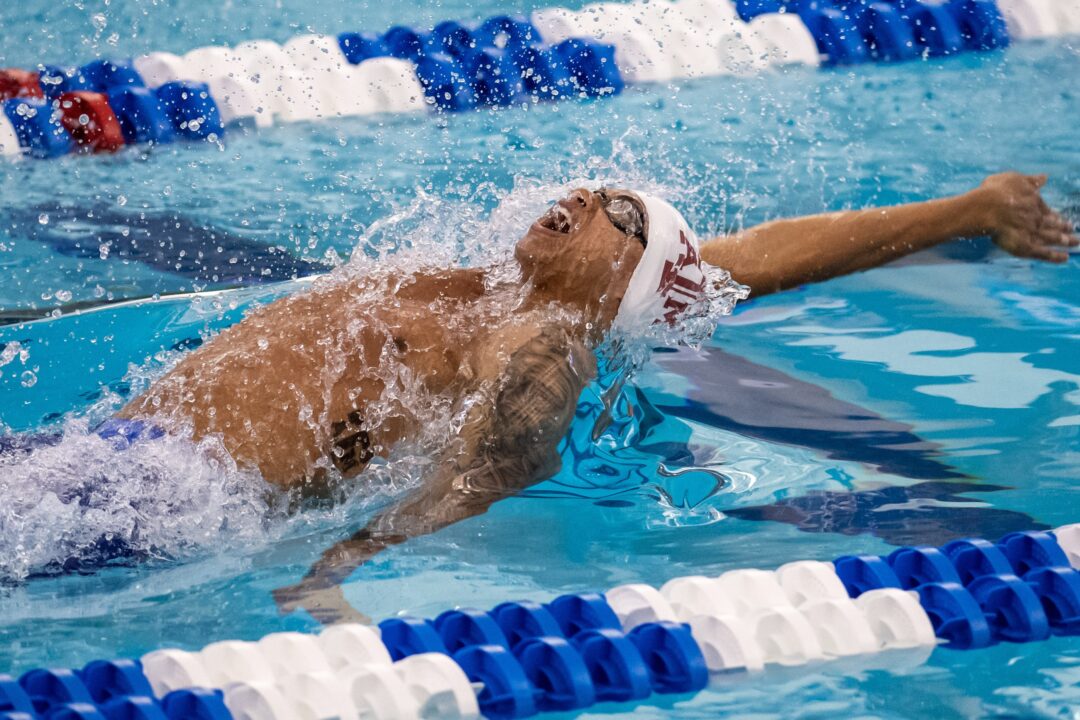 Thanks to a trio of titles by junior Shaine Casas, Texas A&M became the 71st school to win an NCAA title in D1 men's swimming & diving last week. Current photo via NCAA Photos

The University of Texas on Saturday completed its run to a 15th team championship at the NCAA Division I Men’s Swimming & Diving Championships. Those 15 titles, all won under Eddie Reese, extends their lead over Michigan as the most NCAA-declared Division I men’s team titles in history. Michigan has 12, Ohio State has 11, and USC has 9.

Michigan has an additional 7 titles earned between 1924 and 1936, where individual, but not team, championships were recognized by the NCAA – though different newspapers still awarded team championships (much like they’ve always done with the top level of college football).

In addition to their team title, the Longhorns added 3 individual titles: one from diver Jordan Windle and a pair in relays. The Florida Gators also won 3, while team runners-up Cal led all programs with 5.

There was not a ton of movement in the all-time titles rankings. Unlike what we saw after the women’s meet, the men’s teams are more stratified – owed to way more championship meets for the best programs to amass wins.

The biggest shakeup in the rankings is the 3 wins from Texas A&M junior Shaine Casas in the 100 back, 200 back, and 200 IM. That makes A&M the 71st program to win an event title at the NCAA Division I Men’s Swimming & Diving Championships. They now become one of 6 schools to have won at least 3 event titles.

Georgia also made a leap up the rankings thanks to freshman Jake Magahey‘s upset title in the 500 free. The school now has 22 all-time titles, tying them with Michigan State (which is cutting their program after this season) and Princeton: two of the best programs in the country in the 1930s, 1940s, and 1950s.

The rest of the moves were minor: by a single spot in either direction.

Below, see all of the 2021 NCAA Men’s D1 Swimming & Diving event champions, plus the updated all-time rankings.

How many of these schools are gone? UCLA is the highest ranked team to be cut I assume?

15, if you count MSU, Iowa, and La Salle after this year

Wesleyan, Williams and Amherst are D3 now. How long ago were they D1?

I don’t know the exact year each moved, but there was no Division III before 1973.

Would love to see names/events for some of the schools with 1-3 titles. Some I can name- Shane Ryan from PSU, for example… but I am curious as to some others. Long Beach State???

Didn’t Hans Fassnacht win a few back in the 70s?

You’ll recognize some of the names for Long Beach State.

Reminder of the awful teammate featuring the guy pictured above

Care to explain how?