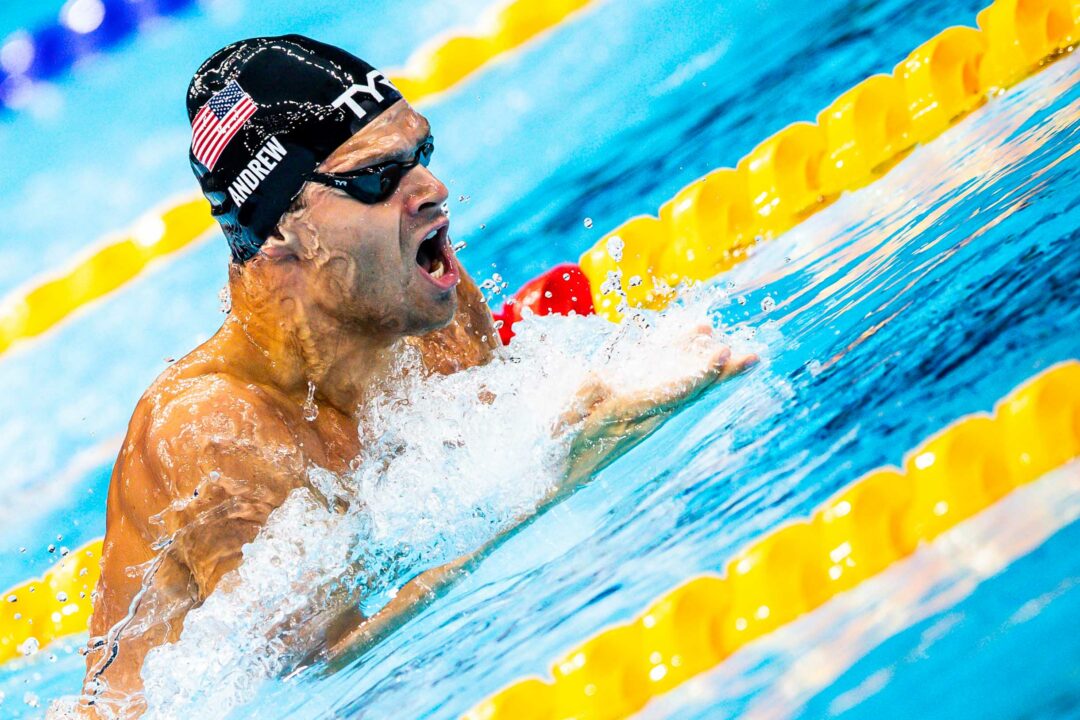 Michael Andrew is the obvious choice to swim breast on the men's 400 medley relay, but could the U.S. go off the board with Nic Fink? Current photo via Jack Spitser/Spitser Photography

Unlike the mixed event, the lineup decisions for the men’s and women’s 400 medley relays should be much more straightforward from a coaching staff perspective—take the fastest swimmer at the Games in each of your 100s. Easy.

Zeroing in specifically on the men’s race, most of the anticipated lineup moves look to be cut and dry. For example, we know Great Britain will bring in Adam Peaty on breaststroke, Russia will bolster their roster with Evgeny Rylov and Kliment Kolesnikov, and the Americans will do a full changeover from the heats, surely adding Ryan Murphy and Caeleb Dressel.

But there are still a few key decisions to be made.

Note: The times for the swimmers listed in reserve are their fastest flat-start times since the beginning of the 2020-21 season, unless denoting with an “r” at the end, meaning the time is a relay split from these Olympic Games.

The Italians went all-in for the prelims, and it paid off as they claimed the number one seed for the final by almost a second and a half in 3:30.02.

They’ve got options in all four strokes, but we know they’ll be back with the same four swimmers.

Thomas Ceccon was 52.23 leading off the mixed relay, so they have at least one second to drop, and Nicolo Martinenghi has made sub-58 breast splits common for him, giving the Italians a great chance to medal.

The no-brainer here is Adam Peaty, and the other three swimmers should remain the same.

Joe Litchfield hasn’t had a good meet, so Luke Greenbank should remain on backstroke, and although there are some different options on freestyle, we know Duncan Scott is their man. Scott had that legendary 46.14 anchor to lead the team to gold in this event at the 2019 World Championships, and a similar split would likely mean Olympic gold today.

James Guy has had an amazing showing at these Games, withdrawing from the individual 100 fly to put his focus on relays. Guy would have had a chance to medal in that race, given his 50.00 split on the mixed medley, so GBR may be even more formidable here than they were in Gwangju.

A pretty disastrous seventh-place showing in the men’s 400 free relay has been followed by some strong individual performances from the Russians, with a pair of elite additions set to come into the fold in Evgeny Rylov and Kliment Kolesnikov.

The 1-2 finishers in the men’s 100 back, Rylov will likely assume the lead-off leg, while Kolesnikov should anchor after winning individual bronze in the 100 free.

The coaching staff has leaned on Kirill Prigoda for breaststroke duties after Anton Chupkov finished 16th in the 100 breast, so Prigoda should stay on—he swam both prelims and finals of the mixed event as well.

Andrei Minakov was fourth in Saturday morning’s 100 fly final, so he’ll take over for Mikhail Vekovishchev there.

There’s also the option of using Kolesnikov on backstroke and Minakov on freestyle, with Kolesnikov and Rylov basically a wash on the lead-off leg (Rylov was also only 52.79 on the mixed relay), and Minakov was the lone bright spot on the 400 free relay with a 47.7 opening leg. However, it seems virtually impossible that the team would leave off Rylov, who has been their top performer of the Games with a pair of individual golds.

Just like Italy, China is all but a guarantee to bring back the same four swimmers.

The only spot with an option to exchange athletes comes on the freestyle, but Yu Hexin‘s time of 48.44 was done all the way back in September, and he’s only raced the 50 free in Tokyo. He Junyi was 48.50 in the individual 100 free, so he should have more in the tank compared to his prelim split.

Japan has options everywhere but backstroke, but it’s likely they’ll keep the same four swimmers from the heats.

Ryuya Mura and Naoki Mizunuma beat Shoma Sato and Takeshi Kawamoto in their respective individual 100s, and although Katsumi Nakamura had a disappointing 17th-place finish in the 100 free, his 47.7 split in the prelims is encouraging.

Although we’ve listed out options for all four strokes, the only change the Aussies will be making will be on fly, where Matthew Temple comes in for David Morgan. Morgan has not had a great meet in Tokyo, and Temple was a solid fifth in the 100 fly final on Saturday in 50.92.

Ah, here’s where things could get interesting (though they likely won’t).

If selecting their top individual finishers from the 100s, the Americans would be going with Ryan Murphy, Michael Andrew, Caeleb Dressel and Zach Apple.

Dressel obviously won the 100 free, but has been over two seconds faster than fellow flyer Tom Shields at the meet, while the difference between Dressel and Apple on freestyle is closer to a second.

The only real question from a fan’s perspective comes on breaststroke, where Andrew, despite finishing fourth in the individual 100 breast, has struggled more as the meet has gone on, and Nic Fink, who was third in the event at U.S. Trials, had a strong showing in the 200 breast.

However, based on the decisions the coaching staff has made thus far, it seems very unlikely they would take a leap and put Fink on the relay over Andrew, even with Andrew having the 50 free final earlier in the session. If they wanted to use a swimmer that didn’t qualify for the individual event on the medley relay, they probably would’ve tried it in prelims, and put Fink over Andrew Wilson.

As for the freestyle, Apple anchored the men’s 4×100 free relay with a scorching 46.69 split, and despite missing the 100 free final and having a tough leg on the 4×200 relay, he’ll almost surely be back in that spot on Sunday.

Bowe Becker is available, but hasn’t raced in a week.

Neither Markus Thormeyer nor Cole Pratt have performed at their best at these Games, but Thormeyer was half a second faster in the individual 100 back, so they’ll stick with him there.

The only other possible change for Canada comes on free, where Brent Hayden could get one last swim in after narrowly missing the 50 free final in ninth. Hayden led off in 47.99 on the 400 free relay, but Yuri Kisil split 47.15, so it seems the spot will likely go to Kisil. Even if Hayden were to be given it, he would probably defer to Kisil, knowing his character.

Fun to scroll through these comments after the race and just realize how many people are negative towards michael for no reason at all. He’s proven himself now. Suck a fat one

What a great ending to the swimming. Yea boys! Love him or hate him, MA did his job. Well deserved on all their parts!

He sure did! If anyone didn’t do their job, it was Murphy. He didn’t match his individual time, nor anywhere near his best time. But it’s a team, and so he did enough.

I think Murphy may have to swim another world record as the lead off swimmer in the back like he did in RIO because Cody Miller wasn’t the fastest at breast to give Andrew some breathing room?

This race is all about Team GB and USA. It’s about the beast vs the poster boy and the backstroke vs the breaststroke. The end result will inevitably be GB win but in what will be a great race.

Inevitably? You knew the result now. The world knew. USA gold and WR! An ultimate ending!

MA absolutely deserves the slot on the team. Nobody on team USA has beat him at the the 10 BR when it mattered. His meet isn’t going as well as trials, but a year ago we would have been happy to find a 58-high breaststroker.

AGREE! Does anyone have the stats of America’s best breast medley relay split times?

Some guys have been pushing really close changeovers at these Games…I have a strange feeling there will be a couple of DQs in this race.

“Michael, not Andrew” is an identical statement to “Andrew, not Wilson”

I just hope we get to hear Rowdy say “Stubblety-Cook” again. Just rolls right off.