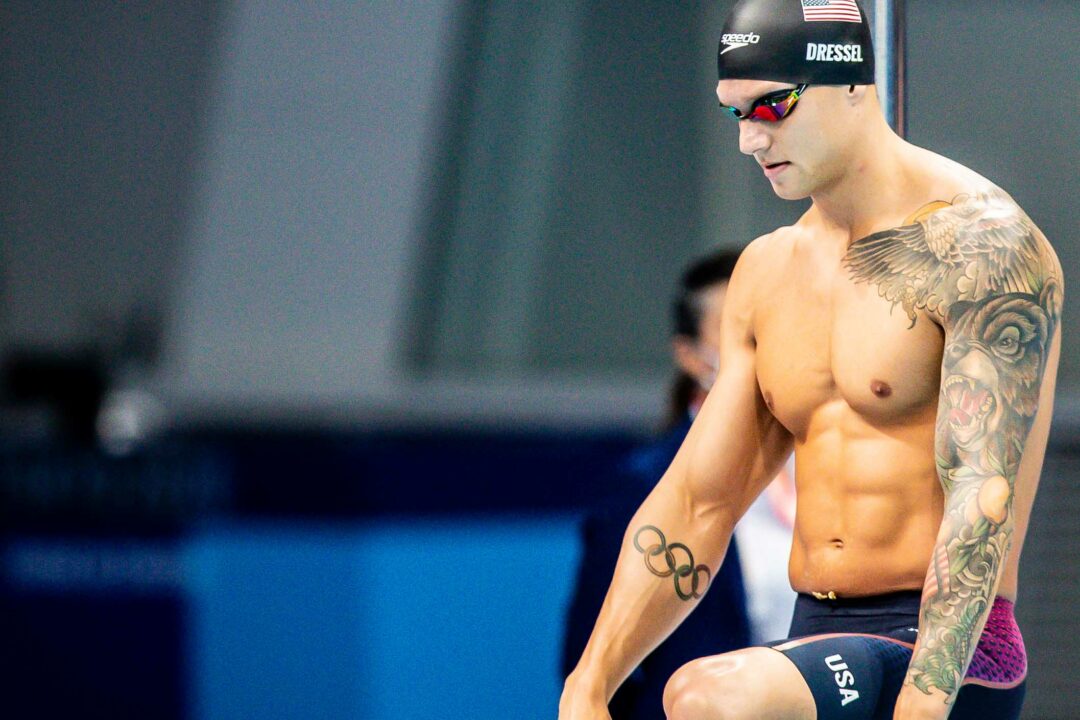 Caeleb Dressel will swim freestyle for the United States on the mixed 400 medley relay, the only country opting to use a male swimmer at the end. Current photo via Jack Spitser/Spitser Photography

The official lineups for the inaugural mixed 400 medley relay Olympic final have been released, and the Americans have put Caeleb Dressel on the anchor leg.

The U.S. team will consist of Ryan Murphy, Lydia Jacoby, Torri Huske and Dressel, a full exchange of swimmers from the preliminaries. All four finished in the top four of their respective individual events.

The Americans will be the only team to have a male swimmer on the freestyle leg, meaning they’ll be facing a deficit at the final exchange, and Dressel will try to mow everyone down. It should make for good TV.

This means the coaching staff favored the Murphy-Jacoby over Regan Smith and Michael Andrew, despite the Smith/Andrew combination being faster on paper. Nic Fink was also an option with Andrew seemingly declining in terms of performance quality as the meet has unfolded.

The Huske/Dressel back-half is virtually identical to a Dressel/Abbey Weitzeil combo.

Check out a look at the optimal lineups, purely based on times posted in Tokyo (no relay splits):

Mixed medley relay makes it first appearance in #Swimming at the #OlympicGames today.

I pulled all individual times (no relay splits) from #Tokyo2020 to find the best five combinations ‘on paper’ for each of the finalists. pic.twitter.com/DoTbQzFXlQ

Only three of the remaining seven squads have gone with the traditional two male/two female strategy—Russia, Italy and China—while Great Britain, Australia, the Netherlands and Australia will book-end their teams with females and have the men swim the middle two legs.

Compared to the heats, the Brits have swapped in Anna Hopkin for Freya Anderson on freestyle, while #4 seed Australia has moved out three of their four athletes, adding Kaylee McKeown, Matthew Temple and Emma McKeon to join breaststroker Zac Stubblety-Cook. Notably, they chose not to use men’s 100 freestyle silver medalist Kyle Chalmers on free and used McKeon on fly.

The other team making some major changes was the Russian Olympic Committee, brining in men’s 100 back champion Evgeny Rylov on the lead-off and Svetlana Chimrova on fly.

Italy has made a substantial upgrade on backstroke, brining in 52.3 swimmer Thomas Ceccon, while the Dutch team has moved out Ranomi Kromowidjojo and activated Femke Heemskerk on the anchor.

Terrible line-up for this relay. You never have a man swim the freestyle leg in a mixed medley even if its Caeleb Dressel. This decision must have been made by NBC. This and the decision not to have Dressel in the 4×200 relay final should get all of the US coaches removed from international meet consideration in the future. The first two relays the US has not medaled in and it wasn’t the swimmers fault……….

The USA Swimming coaching staff has made some real boneheaded decisions on the relays at the Tokyo 2021 Olympics.

US coaches literally went with the 10th fastest option. 9 other choices would have been faster. So dumb.

Is there a way to petition USA swimming to force coaches into a mandatory elementary school math class?

Bad coaching call, put way too much pressure on Caeleb to come from behind. They needed to have the males finish off both legs or stagger them.

Honestly I think bad is an understatement. Doing the math in your head going into it you kinda just know there’s no way. Like there were at least 10 better options. I mean they were only .5 faster than the prelims who had a 50.8 fly leg from shields Dressel could have done in his sleep and a 53.4 from weitzel which hinds/brown or even Ledecky tbh could have at least beaten by a few tenths. Fink or Andrew most likely could have gone faster than the 59.0 Wilson put up and Regan didn’t even swim the 200 so could have matched her time if not gone faster. Really just think they were not prioritizing this event at all.

Very poor relay selection… Regan, Jacobs, Dressel and Apple would have gone at least a 3:38 and gotten a medal. Bad coach decision!

Mixed relays are a failed experiment…it would be better to add individual 50s of the other 3 strokes…and maybe cut out all the semi-finals too.

You wouldn’t be saying that if the US were the ones who won Gold in a new WR.

I’m American and I’ll say Mixed Relay has been a big success. It was so much fun to watch. And strategy is involved. Very riveting.

There’s really not that much strategy involved.

Use a man on brst, use a woman on free.

Put the fastest possible bk/fl combo you can in the water (1 male, 1 female), and if they are close enough it’s justifiable either way preference a combination that has a man on back.

Mixed relays should stay at age group/club level meets where they belong.

You’re speaking rubbish. It’s a great event and will be here to stay.

It’s not a great event, it’s a comically bad one.