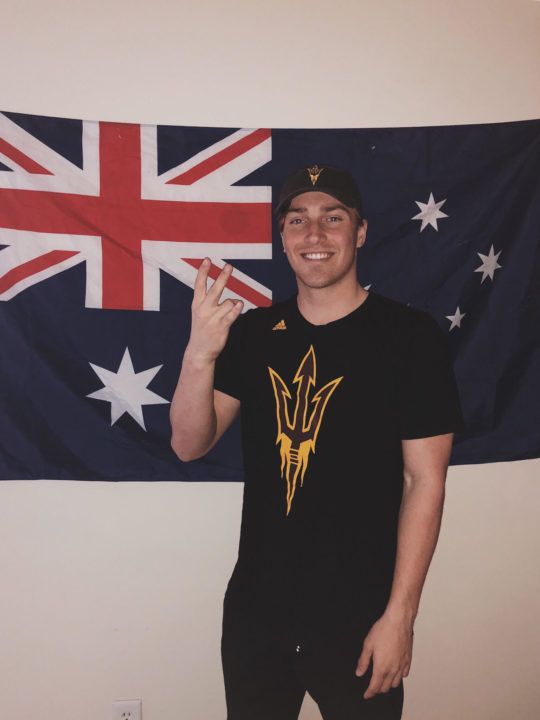 In yet another wrinkle this off-season, ASU's incoming class will grow by one more with a recent announcement from former Eastern Michigan student-athlete Carter Swift. Current photo via Carter Swift

In yet another wrinkle this off-season, ASU’s incoming class will grow by one more with a recent announcement from former Eastern Michigan student-athlete Carter Swift, who has decided to transfer to ASU from EMU.

Swift, who hails from Shepparton, Victoria, Australia, was named the 2018 MAC Freshman Swimmer of the Year after a standout first season with the Eagles. At the 2018 MAC Championships, Swift won the 100 and 200 free conference titles and was essential on EMU’s relays.

EMU, though, cut their men’s team after the conclusion of the 2017-18 season, a move that has been met with great opposition from team members, alums, other coaches, and the larger swimming community. For example, just last week at a rally on EMU’s campus, Michigan head coach Mike Bottom donated $10,000 to help save the program.

Swift’s decision has been made, though, whether or not EMU is able to reinstate their program.

“I chose ASU because I fell in love with what they offer academically and athletically. The team and coaching staff is amazing and will give me the greatest opportunity to accomplish my goals in and out of the water. Forks Up!”

Swift brings in very solid sprint free power to the Sun Devils, and is an intriguing get as the Australian has only had one NCAA season training and racing in short course yards. He has three years of eligibility remaining.

Disappointing. I was hoping for another Jack or Noah.

Lol well nicknames will be in order…but it looks to be an exciting year!

Very proud of the things this young man has accomplished. We’ll miss him back in Ypsi though.

Does ASU have 5 pools shaped like a star with a coach circle in the middle?

One of the best men’s dual meet teams in the country. End of the year championship meet, not so much. Fact.

ASU lacked the depth and number of swimmers this year to do really well in championship meets. However with the new swimmer gains this year they should do much better

I hate to see him go, but big fan of watching him leave

Oh geez rick carters off to next one

This comes after the announcement that Boyd, who is also Australian, is leaving ASU and transferring to Michigan. I never really understood why recruits keep choosing schools that have so many people transferring out of them (for swimming reasons).

According to this article only 2 swimmers have transferred out

Maybe he transferred for $$$ reasons.

The reply was to Boyd’s transfer not ur son

He didn’t beat me in a single race this year, in any event.

Interesting times ahead, EMUs loss of its team has been devastating to all involved .. but wishing all his team mates the best wherever they end up, will keep an eye on your progress, and that invitation to visit us in Australia/New Zealand stands for you all including coach peter!! Eaglesout ..And ASU we can’t wait to meet you guys, and see the best that Arizona has to offer ..forksup

They have no idea what they’ve let themselves in for :D.. and I’m sure he’s learnt a few tricks off you boys ha