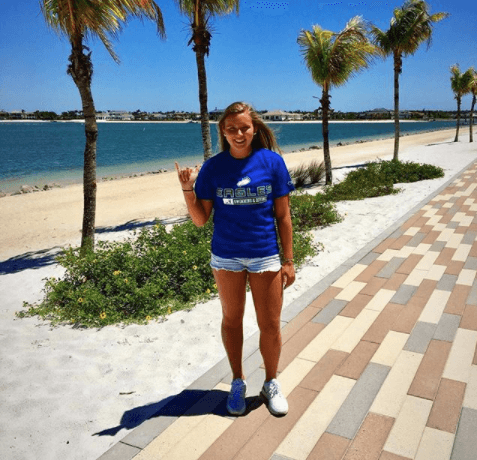 Glinecke has spent two years as a student-athlete at Arizona State, meaning she'll have two years of eligibility left with the Eagles of FGCU. Current photo via Emily Glinecke

This has been a whirlwind of an off-season in terms of D1 transfer shake-ups, with a lot of movement in and out of Arizona State and Indiana, in particular. The next move is a transfer out of Arizona State, as Emily Glinecke has announced her decision to transfer across the country to Florida Gulf Coast University.

Glinecke has spent two years as a student-athlete at Arizona State, meaning she’ll have two years of eligibility left with the Eagles of FGCU. She is originally from Pottstown, Pennsylvania.

As a freshman, Glinecke made the 200 breast B final and 100 breast C final in individual efforts for the Sun Devils at the 2017 Pac-12 Championships. She C-finaled in the 100 breast again this season as a sophomore but was unable to score in the 200 breast. In the breaststrokes, Glinecke was 1:01/2:16 as a freshman at Pac-12s compared to the 1:03/2:20 she produced this year.

FGCU just graduated Sommer Harris, the 2018 CCSA conference champion in the 100 breast, along with Hannah Soutar, the 2018 conference champ in the 200 breast. Petra Halmai, a rising sophomore, finished 2nd in the 200 and 3rd in the 100, and will be one of Glinecke’s primary training partners next season. Already, with her best times, Glinecke will be competing for a conference crown in at least the 100 breast, so this is a big pickup for the Eagles.

Rising sophomore Dylan Boyd recently announced his transfer out of ASU, to Michigan, while ASU’s men’s team picked up two transfers from Indiana. A big get for the ASU women this post-season has been Olympian Cierra Runge.

I am SO HAPPY & grateful to be given the opportunity to continue working towards my goals athletically and academically @ FGCU ????#wingsup!!!

Would like to hear the backstory about whats going on at ASU thats causing all these transfers.

Just look at how the ASU teams did at NCAAs and that should explain it!

I think you need to consider that it is only recently that we have had a news outlet reporting transfers from schools. Anti Asu folks were whining about all the coverage earlier in the year now maybe it’s time for the pro ASU folks to whine about it.

While I’m not necessarily a big ASU fan, I don’t think we should read too much into this transfer. This athlete didn’t have a great season and is transferring to a less competitive school where she could make a bigger impact. She was 5th on the depth chart in both breaststroke events last season conceivably excluding her from dual meet line ups. These kinds of transfers happen all of the time. Good for her for doing what’s best for her.

Transfers in make it pretty clear!

Transfer announcements are going to be just as common as Junior verbal commitments for ASU.

And several other D-1 schools not uncommon

Did I do it right?

I agree with you I don’t know if all these transfers at Indiana and ASU will really have any implications for either team performance wise at conferences and NCAAs next year it would be interesting to hear why there are so many people leaving and joining these teams. It is unusual to see this many roster changes

From what I’ve heard about both coaches (and particularly Ray Looze), if you aren’t a star, you don’t get much attention. You get thrown in the distance lane and don’t get to compete in your best events. While this seems harsh, it may be the cost of creating a top level team with a not unlimited coaching staff and roster spots. You have to prioritize. You bring in a lot of freshman and see what diamonds in the rough emerge and then you drop everyone else.

Yeah good point that actually makes a lot of sense. Definitely harsh but you’re right that is how you make a great team. You don’t get a spot next year just cause you performed this year

Feel free to elaborate on why everyone hates it. Sounds like Bowman and his assistants run the team like a Lord of the Flies reenactment.