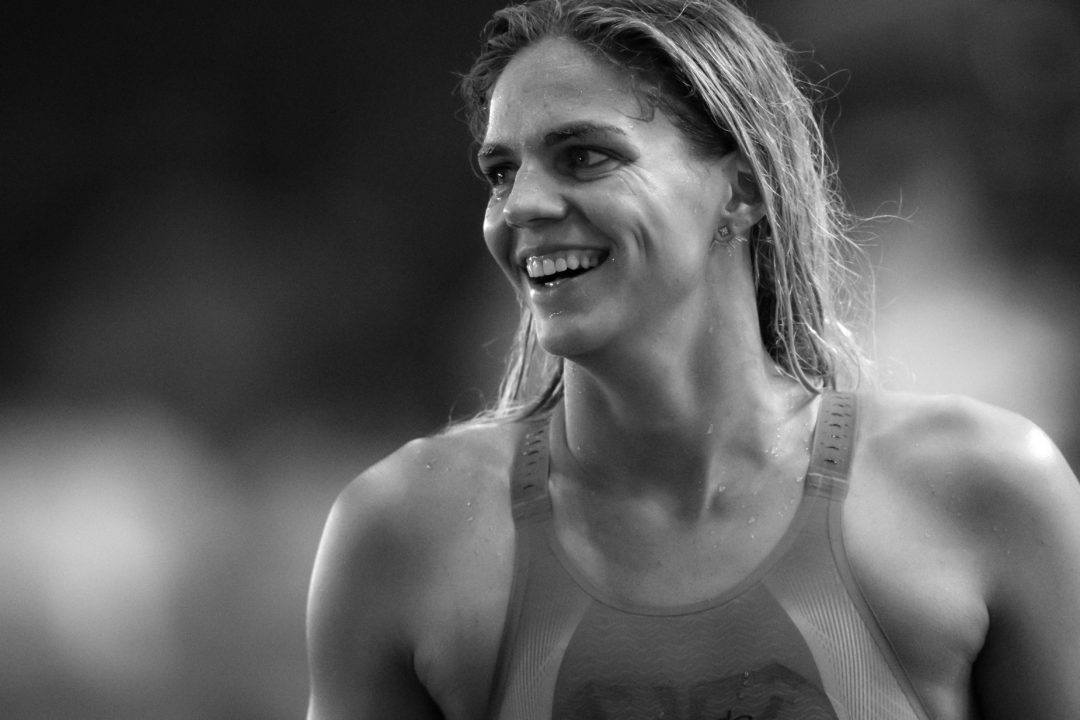 Vitalina Simonova and Yulia Efimova (above), both of whom have served doping suspensions, went 1-2 in the 200 breaststroke on Tuesday. Archive photo via Mike Lewis/Ola Vista Photography

Coming into Tuesday’s final, only 3 Russian women had ever been under 1 minute in the 100 meter backstroke. In Tuesday’s final, 4 women broke the barrier, including a tie for the 2nd spot on the European Championship team.

Daria K. Ustinova led the way with a 59.73, while Maria Kameneva and Anastasia Fesikova (Zueva) tied for 2nd in 59.94. Kameneva was the new name under 1 minute – her previous best time coming into the meet was 1:00.10 at last year’s World University Games.

Fortunately for Russia, both swimmers are already qualified for the meet in other events – Fesikova via her 2nd place finish in the 50 back, and Kameneva via her win in the 50 back and her Russian Record in the 50 free. While Russia has only committed to taking 2 individual swimmers via the qualifying standard per event, each country can race up to 4 entrants per event in prelims at Euros, so both are likely to swim the race in Glasgow.

After a week of record-setting, with national junior, national senior, and/or world junior records being broken on each of the day’s first 4 meets, Tuesday’s penultimate session was relatively anti-climactic. The biggest surprise came in the women’s 200 breaststroke, where Vitalina Simonova swam a 2:23.67 to upset the defending World Champion in the event Yulia Efimova.

Efimova took 2nd in 2:24.02, which is almost 4 seconds slower than she was in this meet last year (though it was still enough to qualify for the European Championships). For Simonova, the result was her best time since 2015 after returning last year from a two-year doping suspension. Efimova has twice failed doping tests, though she was only sanctioned beyond a temporary suspension for one of those.

Good job SwimSwam! Call it as it is!

Let’s hope Matthew Willenbring will be also labeled DOPER every time you write about this future swim star. After all, he won multiple Junior World medals WHILE DOPED last year, and is expected to be one of the brightest NCAA swimmers in years to come.

I certainly hope -in the spirit of this article- you will mention his dubious career start (doping in juniors, really?), every time Texas wins anything with him in the lineup. Shame them!

Or not (depending on your own double set of standards) 🙂

Whilst FINA’s biggest showpiece is the Olympics, it’s hamstrung by what the IOC will enforce.

The IOC will always soft peddle whilst headline events such as the men’s 100m would be decimated by that rule (no Gatlin, Gay, Blake etc etc).

4 years for a first positive test.
Lifetime ban for a second.

4 years for a first positive test.
Lifetime ban for a second one.
I guarantee you that athletes and coaches would think twice before cheating.

On the other hand that’s not common to see 2 former dopers finish 1-2. 🙂

Yesterday Kuimov was DSQd in the 100fly, I don’t know why. Today threre’ll be a time trial with Kudrjasov, Nikolaev and him.

It was a false start.

I understand both of these athletes have failed doping tests. They should be punished appropriately, but I am not sure it is wise to make needlessly clickbait-y headlines like this. Why is Park Tae Hwan not immediately referred to as a doper in headlines like Efimova?

We in the swimming community should be skeptical of any who have failed a doping test, but we also should try to ensure our judgement are fair and not influenced by the nationality of the swimmers in question

Might be a factor that she gas been caught twice and then added a DUI. All she could add for shame at this point is to grt drunk at a gas station and tear down a poster or something

Sure, Efimova deserves the hate. I was more referring to Simonova, I don’t know anything about her or the details of her suspension

I don’t either, but it was a two-year ban. You don’t get a ban that long usually for a minor infraction.

You can read more about the ban here: https://swimswam.com/tag/vitalina-simonova/

Anyone else not surprised of Vlads time?