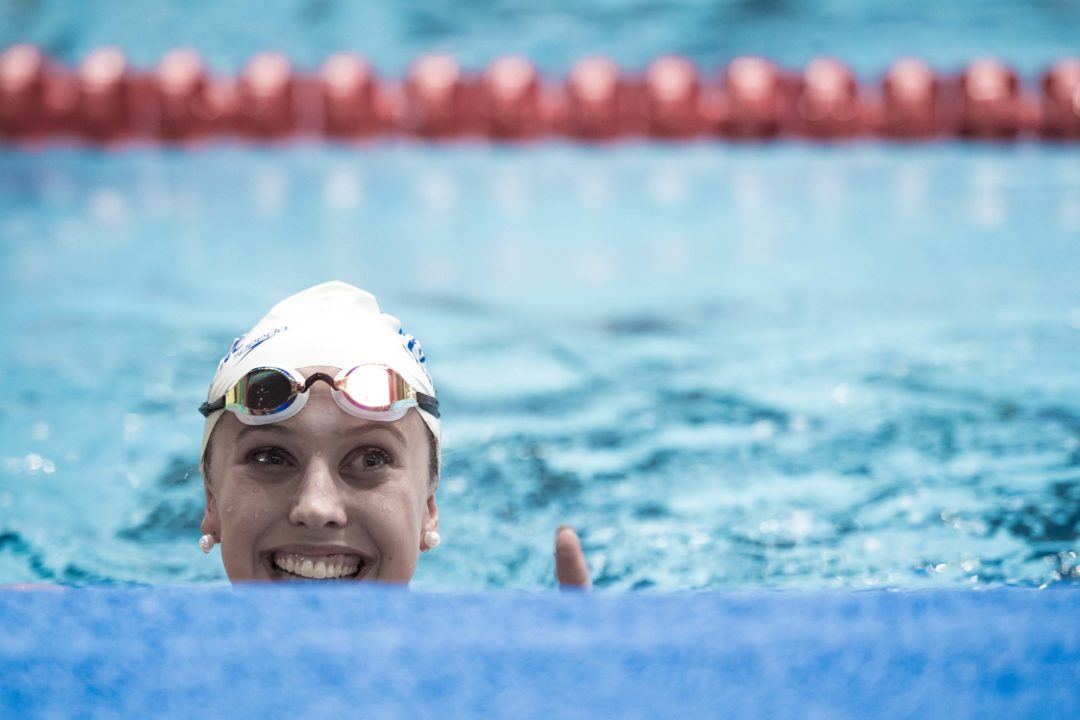 USA's Kathleen Baker swam the 3rd fastest 100 backstroke in the world this year with a 58.77 at the Mare Nostrum in Barcelona. Current photo via Mike Lewis/Ola Vista Photography

2016 Olympic silver medalist Kathleen Baker dropped a very quick 58.77 to break Emily Seebohm‘s Mare Nostrum Tour record of 58.99. That time catapults her to 3rd in the 2018 world rankings behind Canada’s Kylie Masse (58.54) and Australia’s aforementioned Seebohm (58.66). Even more notable, that is Baker’s 5th fastest career performance and only 0.23 seconds away from her lifetime best of 58.54 set leading of the United States’ gold medal-winning 4×100 medley relay at the 2016 Rio Olympics.

For a midseason meet, that performance puts her in a great position to potentially challenge Masse – the current World Record holder (58.10) and Seebohm at this summer’s Pan Pacific Championships. The key word in that previous sentence is potentially. Before Baker can have that opportunity, she will have to face off against a hard charging group of American backstrokers including Olivia Smoliga and Regan Smith who have both been 59.3 or faster this year and have lifetime bests in the 58-second range.

It’s not very often that an Adam Peaty long course record is broken – unless, of course, it is broken by Peaty himself in World Record fashion. However, that is exactly what Japan’s Yasuhiro Koseki did Thursday by setting a new Mare Nostrum Tour record in the 100 breast with a 59.01 – eclipsing Peaty’s 2016 record of 59.07. Peaty still holds the WR with a 57.13. Notably, this performance by Koseki was faster than his 59.10 in the final of the 2017 World Championships in Budapest – a swim that earned him 4th place. The 1-2 punch of Koseki and 200 breaststroke World Record holder Ippei Watanabe has Japan in a very solid position for multiple medals heading into a home country Olympics in 2020.

Speaking of noteworthy Japanese swimmers, Rikako Ikee continues to prove she is among the world’s elite running away with the 100 fly in Barcelona with a 56.40. The 17 year-old didn’t have her best showing last summer at the World Championships, finishing 6th in the 100 fly (57.08), but she has since been on a tear. Ikee broke the Japanese National Record in the 100 fly in April with a blistering 56.38 – only 0.03 off of Sarah Sjostrom‘s world-leading 56.35 this year. Sjostrom is the current WR holder with a 55.48.

As long as they all make the team in something, Baker, Smith, and Smoliga can all swim the 100 Back at Pan Pacs.

Baker impressive. She’s the woman to beat right now in US women’s backstroke.
Ikee is a very very very special sprint talent. She will peak in time for 2020 at home. Looks like everything has been planned. 🙂
And if Oleksiak can find again her 2016 Rio shape for 2020 then the Canadian women’s 4X200 free relay will be in the gold medal conversation there.

What was that look from Hosszu to Baker after the race? I couldn’t tell if she was surprised at 58x or mocking herself for finishing 10 seconds back over 100 meters.

Somehow this announcer fixates on the world record during every race, even though there’s virtually never the slightest threat.

Any link to the livestream????

Erica Sullivan has been on a tear. Feels like I have been reading her name a lot in the past few months. Tough swimmer. Good for her!

Despite Missy Franklin hasn’t shown yet how far she can go at 200 free by staying firmly around 1:59 flat her chances to be a member of 4×200 relay are surprisingly still good. She has very unusual group of swimmers to compete against for two spots (if Manuel shows no interest): Drabot, Deloof, McLaughlin and Tuggle with the fastest of them being 1:58.86 this season. There are some other “traditional” members of relay like Schmitt and Runge, but they haven’t shown yet competitive time this season and their chances are hard to estimate.

looks like some of these potential 2020 veteran’s are putting the younger guy’s on notice for what it’ll take to make that team.