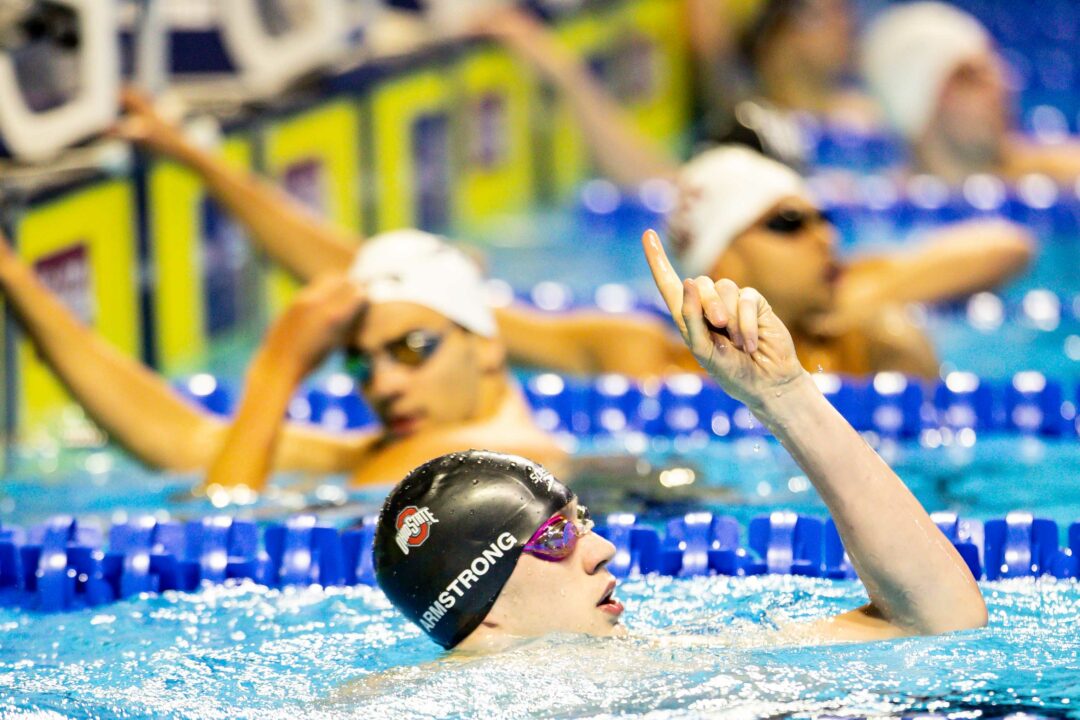 Ohio State’s Hunter Armstrong touched 2nd in the men’s 100 backstroke final tonight, in all likelihood making himself the first Ohio State swimmer to make the U.S. Olympic Team in a very, very long time. Armstrong used the fastest 2nd 50 in the field to get the job done, nearly running down Ryan Murphy, the World Record-holder.

Armstrong flipped 7th at the 50m mark (25.73), and then barely slowed down on the 2nd length, splitting 26.75, which was the only sub-27 split in the field. The final time, 52.48, also marked another best time for Armstrong, who seems to improve every time he races.

He’s dropped an incredible amount of time in the LCM 100 back just in 2021. Armstrong started the year with a lifetime best of 54.74, and has already whittled that down to 52.48, an improvement of 2.26 seconds.

Armstrong is now the #5 performer all-time in U.S. history, moving up from 7th, which is where his semifinals swim landed him. Here is the current list of top 5 Americans all-time in the men’s 100 back:

Armstrong remains the #5 swimmer in the world this year:

Hunter Armstrong 5th fastest in the world this year in 100 Back and now has his own Swim Swam page! Counting the spots to find Armstrong on the Olympic team! For our local swim club, CCS-LE, this is HUGE!

Let’s go Hunter! Making Buckeyes all over the world proud!

First OSU swimmer in how long??? They used to rule the roost back in the days of 48 states

osu swimmers know what i mean but the guy doesnt show up for a full week of practices, but he makes it work lmao itsj ust funny

We aren’t OSU swimmers. How often does he take a week off?

WAIT you swim for OSU? Never heard of you