Dressel: “That Was One of the Most Technically Correct 100 Frees I’ve Swum” 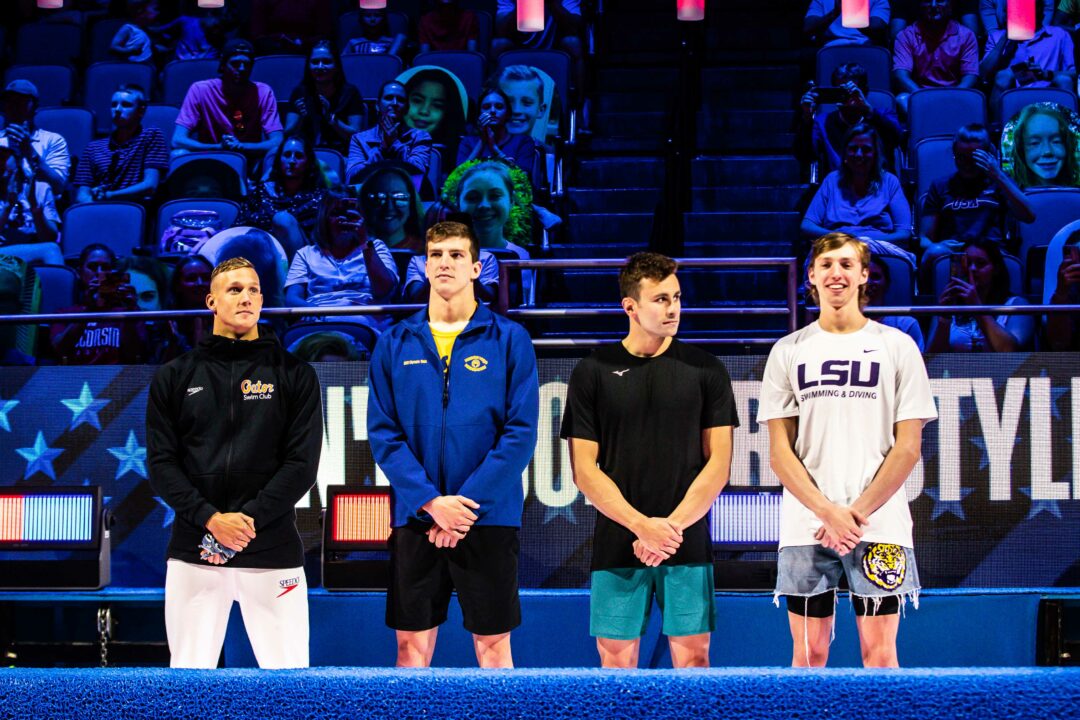 200 fly champion Hali Flickinger, and the top four men in the 100 free — Caeleb Dressel, Zach Apple, Blake Pieroni, and Brooks Curry fielded questions shortly after the end of Thursday night’s session at the 2021 US Olympic Trials.

Asked about tonight’s race, Dressel said that he

…thought that was one of the most technically correct 100 Frees I’ve swum, so really happy with my approach to that.  Parts of this meet that are quite unfortunate. I wish 100 Free was a little bit earlier so I could get the weight off my shoulders, but I’m fine with where we are at right now. I’m looking forward to 100 Fly tomorrow and then 50 Free after that.

Dressel was asked about the possibility of Florida sweeping the men’s freestyles. Current Gators Kieran Smith has won the 200 and 400 free, and Bobby Finke won the 800 tonight.

I look up to both those guys. I don’t care if they’re younger than me, what they brought to the university. I’ve learned things from both of them, so we’ll keep the ball rolling. I’m not guaranteed any wins or anything like that, sweeping the freestyle events. I’ve got a butterfly event to swim tomorrow so I’m focused on that.

Flickinger, who is a University of Georgia alum who recently made the switch to train under Bob Bowman at Arizona State, described how the training environment there has helped her.

ASU took a year off of college swimming, so I got to spend every day with them. We were all on the same schedule. I just was able to spend so much time with them, which I think really helped relieve my mind, because I was just having fun and enjoying it. Yeah.

As we’ve seen numerous times over the past few years, Hali Flickinger and Regan Smith locked horns once again in the women’s 200 fly final, with Smith, as usual, jumping on the early lead.

Flickinger didn’t let her get away, however, and the two turned almost dead-even at the 100, just under 1:00. Flickinger pulled away on the last 50, out-splitting Smith by almost a full second in 33.12, as she earns the right to represent the U.S. in this event at a second straight Olympics.

Flickinger took one back for the veterans, in a sense, as we’ve seen the youngsters come out on top in a lot of the events recently, especially on the women’s side.

Oh, and Flickinger’s time was pretty good too.

Her 2:05.85 improves on her personal best by .02, set in 2018, lowering her own U.S. Open Record. The UGA grad notably changed training bases, joining Bob Bowman at ASU, after winning silver at the 2019 Worlds in this event.

I think the reaction was because someone dared to ask the question..

It has looked a little more up-and-down to me, especially heading into the first wall of the 100

Yes, this! I would think that up and down motion is wasted energy…

What I’ve noticed is that a lot of times when he’s not fully rested but needs to go fast it looks like this. 2018 nationals for example. I have no doubt it will smooth back out and have good DPS for worlds.

Interesting that Dressel breathed on the first stroke after the start

I noticed that too. I think he’s keeping something in the tank for Tokyo so this 100 was a little relaxed.

I still can’t stop admiring that Russian 400 free relay. This American squad is nice but it’s no match for Kolesnikov/Minakov/Grinev/Morozov. And let’s not forget the depth the Russians have, with Rylov, Girev, Shchegolev, Vekovishchev, and Zhilkin. 8 gold medals out of one relay!

I think after last night the Russians will be slightly favored.

But the French in 2008 and the Aussies in 2012 were even more strongly favored than the Russians are now, and look at how that turned out…

And in 2000 and 2004 the Americans were strongly favored. Since 1996, the favorites winning that race has become an absolute rarity.

Dressel has gotten complacent and is cutting corners in his technique. Not good.

do you people have no sense of humor what is happening here!!!

Kalishinokv will destroy them both

This thread is about the US trials 100 free. Maybe you’re confused and got lost. It happens to dumb folk, keep your chin up.

He’s right tho (and Dress is no goat).
Unfortunately your guy was super
where it mattered the least (worlds)
n’ he’s gonna choke in the Olympics
again (where it matters the most). N’
the times of the rest of the field, well
those are just pathetic. The Ruskies
(that I don’t like ‘em much) are going
to smash them like (American) guitars
when comes relay time (and possibly
the other antipathetic ones, the Brits)…

Really interesting how a few NCAA guys (Katz, Curry, others?) clearly focused on OTs rather than NCAAs. I was wondering why he didn’t have a great SECs and NCAAs after his breakthrough year last year. Now I know. Same with Katz. Big difference is that Katz’s team was going for an NCAA title, so that must’ve been totally worked out between Eddie and him. Good (as usual) on Eddie for letting him take that approach.