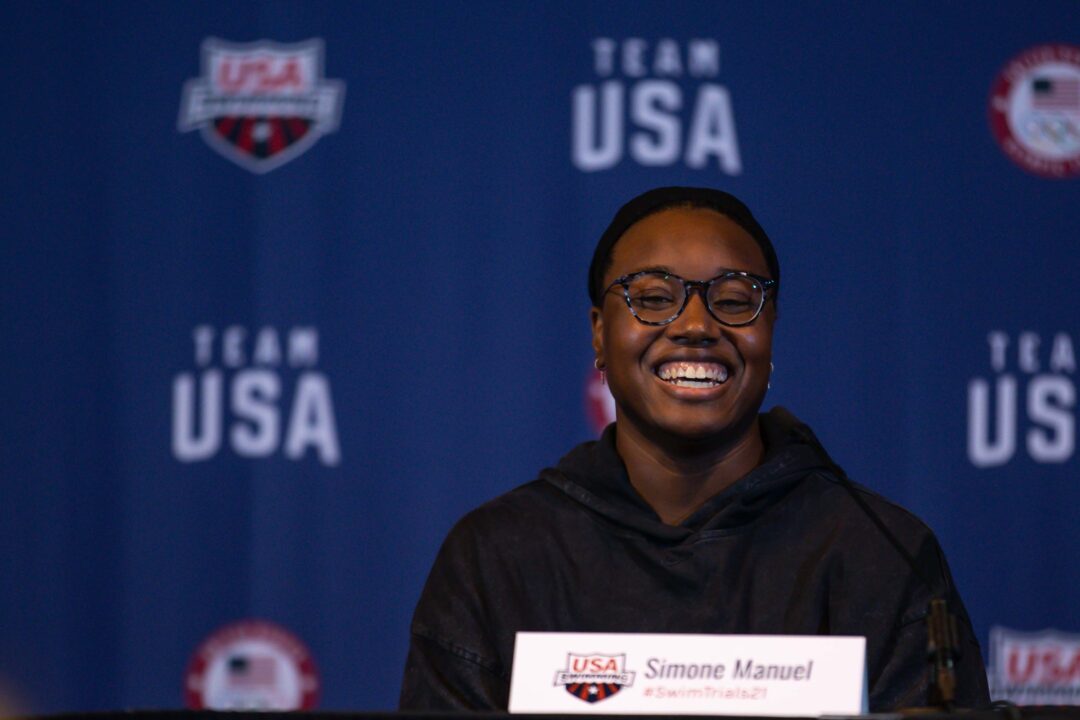 Defending Olympic gold medalist gave an emotional press conference in which she explained how a diagnosis of overtraining syndrome impacted her training. Current photo via Jack Spitser/Spitser Photography

Not too long after heartbreakingly finishing 9th overall in the semi-finals of the women’s 100 free, defending Olympic gold medalist Simone Manuel sat down with the press. During the emotional press conference, Manuel described how her training during this year has been hampered with a diagnosis of overtraining syndrome, forcing her to take several weeks off from training earlier this spring.

About 11 weeks or so, I was diagnosed with OTS, Overtraining Syndrome. I was feeling pretty bad the week before the San Antonio Pro Swim Series in March and went to the doctor after that competition, and that’s when I was diagnosed. The meet was in San Antonio. I went to a doctor in Houston because I went to visit my family for a little bit. I went back to Stanford and modified my training as much as I possibly could while staying in the water. After about, I believe, two weeks of modified training, I wasn’t seeing any progress with my performance in the pool; it actually was declining.

From that moment, with the doctors and kind of Greg’s recommendation, the end of March, I took three weeks off, completely out of the pool. I can’t remember the exact date, but I do remember my first date back training was April 17th.

She revealed that she would need to take several months off of training after she is done competing this summer. That break could come after Trials, or after the Olympics if she makes the team, as she still has a chance in the 50 free.

It was good vibes all around for the Georgia swimmers following Fink and Wilson’s 1-2 finish in the 200 breast, as good friends Olivia Smoliga and Natalie Hinds kept the good times rolling but tying for the victory in the first semi of the women’s 100 freestyle, both hitting a PB of 53.55.

Smoliga is coming off a third-place finish in the 100 back, still looking to make her second Olympic team, while Hinds has positioned herself to potentially qualify for the first time tomorrow.

Those two ended up qualifying tied for first overall, but the big surprise was the finish for Simone Manuel.

Manuel, the defending Olympic champion and two-time reigning world champion in the event, had been out of the water for three weeks in April, we learned during the broadcast, and subsequently placed fourth in the first semi in 54.17. That ultimately earned her ninth place, .02 outside of tomorrow’s final.

Manuel missing the Olympic team in this event, let alone missing the final, is the biggest surprise of these Trials so far.

Cal’s Abbey Weitzeil, the 2016 Trials winner, led the second semi in 53.66, qualifying third overall. Cavalier Aquatics’ Catie Deloof busted through the 54-second barrier for the first time in second, clocking 53.77 to advance fourth into the final.

Brown in particular hasn’t performed well this week, so getting into the final is a huge turnaround.

With Manuel out, this event is all of a sudden wide open, which is music to the ears of someone like Smoliga, who may have thought her hopes of competing individually in Tokyo were over after the 100 back.

Also notably missing the final was Claire Curzan, who went 53.55 earlier this season, along with Mallory Comerford and Kelsi Dahlia, who have featured prominently on the American 400 free relay throughout the quad.

She burned out and the extra year of waiting for the Olympics took its toll mentally. It is what it is. Her body was just not cooperating. It was extremely brave of her to share her story. So, people don’t be so nasty. Enough of the speculations and lack of empathy (previous post). She will always be a star, Olympic champion and World Champion and she doesn’t need to prove anything else to anyone.

Did the Stanford Olympians shave and taper for something last summer anyway? I recall ledecky saying this was her first taper in two years… might’ve been a mistake not to take that downtime and that chance to swim fast a year out from these games….

So, it was only Simone that trained during pandemic and no one else had to train and wait for the extra year for the Olympics?

People’s bodies (and brains) don’t all work the same. Isn’t that the point of Michael Andrew? His training works for him, but it might not work for someone else (Ryan Lochte, to name one)? You have a limited amount of control over what your body allows you to do sometimes. Otherwise, we’d all have a shot at being Olympians. What is a benefit to a lot of people ends up hurting others, and there’s nothing they can do about it.

I’m not sure I understand your desire to kick someone while he/she is down.

Not sure he understands much of anything with that screen name.

I’ve been suspecting that alot of the swimmers from Stanford and Indiana (and others) may have been doing the same thing.

In a panic to “get back in shape” after the Covid layoff or interruptions they just grinded themselves to a point that you can’t taper from.

Didn’t Ella Eastin have something similar?

ella has dysautonomia, a chronic condition which unfortunately has no cure. simone can fully recover from OTS once she gets an ample amount of rest.

She was out of the pool in April. Diagnosis was OTS. Never heard of it til now. No excuses…she looked flat. Blame who you want…trails are about the here and now. Good luck in the 50!

OTS has been an issue for years. Tim Shaw.

She talked about that in the press conference, it was a good swim last month. Tonight just wasn’t

Interesting she didn’t mention anything about OTS last month when she swam well.

Anybody who has ever cracked an Exercise text book should know exactly what OTS is and the signs and symptoms. Read more.

That is not true. It was publicized on swimswam that she was out of practice for injury/illness. With OTS her body won’t recover in between prelims and semis. A PSS swim meet is nothing like the USA Olympic trials.

Please educate yourself and don’t be ignorant. Read about Tim Shaw.

he drank too much tap water with fluoride …it damaged his brains …so he did not watch Simone’s press conference and jumped directly on the comment section as MR Criticize it all without knowing .

Not only that, but 53 isn’t exactly fast for SM.

Yeah SwimGuy19 it’s all about the trails, never mind the trials.

There are a lot of trials and tribulations at trials and in the heads of all knowing commenters.

Walter just pointing out that the swimguy19 wrote trails…

She’s not making excuses. She’s basically saying it is what it is and this is why it happened. I had a buddy with colitis and had significant struggles with overdoing it in training. Bet you’d be the type to tell him he’s making excuses too.

Do some research. Over training is real and it isn’t easily detectable unless blood tests and heart rate are tested daily. Please don’t be so quick to judge when you don’t know what OTS is and how to recover from it. To suggest that Simone is making excuses disgusts me. She is human and has been diagnosed with a condition. Give her some grace and wish her well! She has at least earned that and I believe her when she says she will be back. Folks better watch out!

This past year has affected everyone in some way good and bad. She is going through something and it has to be very hard to not be where she wants to right now whether its physical, mental or both. She is not the only one but the attention on her as a gold medalist has to be that much harder. It makes you feel for several of our favorite top athletes that are in that situation. I hope to see her and others back for more.

OTS sounds a totally made up diagnosis but there is certainly “burnout“ and it can happen to anyone, we are all humans not robots. I don’t know what she could have done in retrospect, but she is no longer in college this is her chosen career, albeit a short term career. Should she have stayed in Stanford and with Meehan far away from home when it was so hard to find pools to train ? No one knows what would have been the right decision. However I can’t help but notice that the athletes based in the south and Midwest have generally done better vis a vis the expectations The same applies for collegiate athletes compared to post collegiate athletes.

OTS is not made up diagnosis. It has been well documented for many years.

Correction- burnout is a “made up” term and OTS is a real diagnosable condition.

I suggest “The Biology of Swimming” as a good read. It explains on the biochemical level what scientists know right now.

Why are people trying to say that the OTS diagnosis is BS? It happens to far more elite athletes than you believe, and considering how these athletes were probably desperate to get back In shape from lockdown, completely feasible

It seems the post graduates have suffered more than the collegiates.

Maybe because they have been training longer?

Yeah, Simone talked about elevated resting heart rate and workouts being harder than they should be – I’m pretty bewildered that some people think it’s “made up”.

Simone has established her place in the history in this sport. She is amazing. I hope she is ok.

Did anyone force her to overtrain?

If yes, the coach is responsible.

If not, well…… excuses

too much tap water got you into this …welll ….. imaginative scenario

There’s a difference between excuses and explanation

Seriously? Greg Meehan doesn’t force his athletes to do anything. He doesn’t have to because they are self motivated. There’s no solid way of knowing if over training is happening unless there is significant decline after an adequate adaptation period has passed.

She’s admitted she was depressed, struggling, trying to train and her body wasn’t cooperative. I am sure it feels good to criticize an elite athlete dealing with one of the toughest moments of her career. Your lack of class highlights her ability to be classy.