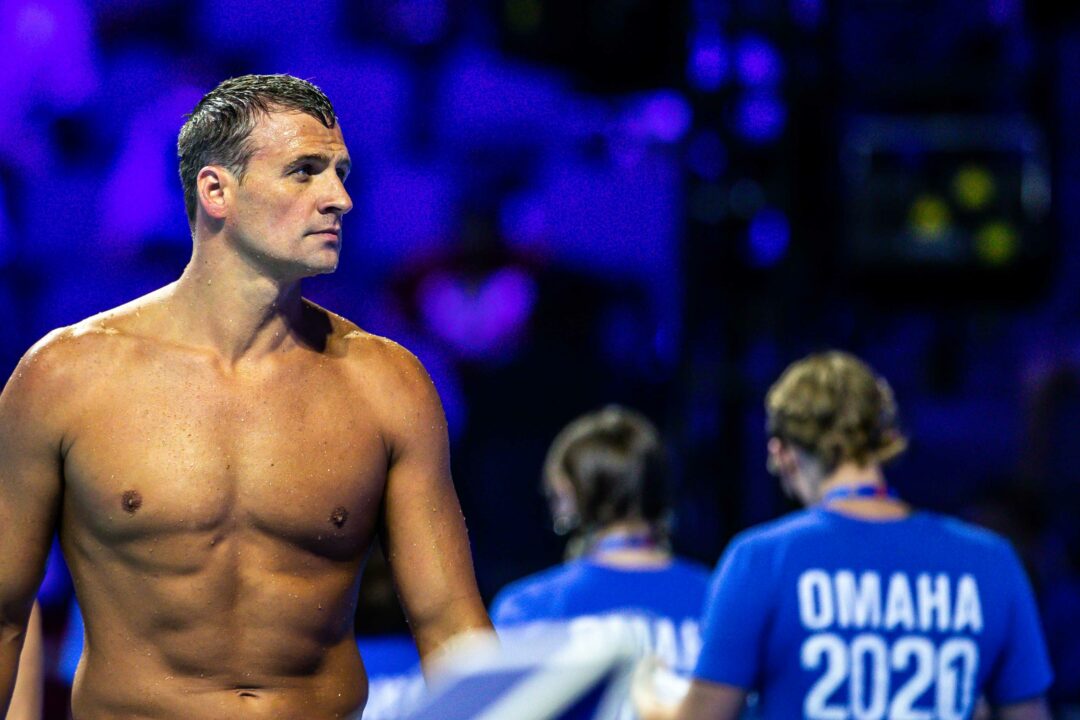 Ryan Lochte is taking on a brutal 200 back/200 IM double this morning in his attempt to make a fifth-straight Olympic team at age 36. Archive photo via Jack Spitser/Spitser Photography

It’s a clash of young and old in the women’s 100 free this morning. Each of the three circle-seeded heats will pit an established veteran or two against a young up-and-comer.

We start off with two-time Olympic medalist Abbey Weitzeil leading our first heat against 16-year-old Claire Curzan. Weitzeil made the 2016 Olympic team in this event, winning gold as prelims leg of the women’s medley relay and silver as part of the women’s 4×100 free relay. Curzan just likely qualified for her first-ever Olympic team on Monday night, taking second in the 100 fly.

Next up is former American record-holder Mallory Comerford taking on 100 fly champ Torri Huske. Comerford was an 18-year-old fast riser as of our last Olympic Trials, making semifinals of the 100 and 200 frees. Since then, she’s won 7 World Championships gold medals and two silvers, all as part of relays in this 100 freestyle distance. Huske has been perhaps the breakout star of the meet so far, setting an American record in her 100 fly win and later making finals of the 200 IM despite swimming a tough 200 free/200 IM double in both heats and semifinals.

We’ll get to see Ryan Murphy lead the 200 back heats after winning the 100 back a few nights ago and booking his return to the Olympic stage. Behind Murphy, Texas A&M standout Shaine Casas looks to bounce back after a third-place finish in the 100 back on Tuesday night.

Bryce Mefford was a breakout performer in that 100 back, and he’s arguably better in this distance. So is Austin Katz, who will battle Mefford in heat 5. Casas takes on six-time Olympic champ Ryan Lochte in heat four, with Cal star Daniel Carr between them. In the final heat, Murphy will clash with Florida’s Clark Beach.

The 200 breast should be a smash. Lilly King defended her Olympic Trials title in the 100 breast Tuesday night – the first woman to do so since the 1980s. But she’s got a tough field to face in the longer distance, especially after both Annie Lazor and Bethany Galat swam very well in the 100 – both Lazor and Galat are more endurance-based breastrokers who should thrive in the 200, while King is more of a sprinter who is working to add the 200 to her world-level range.

The session will end with the 200 IM, pitting Trials 400 IM winner Chase Kalisz against Trials 100 breast winner Michael Andrew in a true clash of two of USA Swimming’s most versatile talents – one (Kalisz) geared towards endurance and the other (Andrew) a true speedster.

That event will also feature 6-time Olympic gold medalist Ryan Lochte trying to make his fifth consecutive U.S. Olympic team at the age of 36 Lochte is taking on a brutal 200 back/200 IM double this morning, at least per heat sheets. Olympic 4×200 free relay qualifier Andrew Seliskar should also be in the mix, along with Texas’s Carson Foster, who has had two close shaves with the Olympic team already this week.

I really think that we are underestimating the impact of the pandemic on swimmers, especially distance swimmers like Ledecky. I’ve seen at all levels – age group, college, pros – that the distance swimmers are having the hardest time getting back to where they were. Also Australia definitely had way more relaxed restrictions than the U.S. did at no fault of the swimmers from either country. Let’s try to be more understanding and hope that the Team USA will perform at their very best at the Olympics.

I really don’t think Ledecky has had much rest. Not much home competition in her events – she’s saving something for the big show.

The more I think of it, the more I realize that the extent to which the United States was hit by the pandemic (more than any other country) might have had a disproportionate effect on their swimmers, especially relative to countries like Australia which basically never even had a pandemic (a mere 30k cases compared to the U.S.’ 34.3m). Ultimately this trials has indeed been a bit disappointing in terms of times… imagine if Tori Huske didn’t compete, for instance. That alone would make this meet a disaster thus far. Hoping Dressel can light a spark over the next few days, and that their swimmers greatly benefit from the month before the Olympics start & training camp.

I don’t know about Australia, but afaik USA had a much better situation than GB when it came to swimming. For the first part of lockdown not even elite level athletes could get back into the pool, and even when elite level athletes could return, those on the fringes couldn’t. Basically if you didn’t train at Bath, Loughborough or Stirling, there was no swimming whatsoever.

Even now a lot of clubs are still limited in terms of training sessions because lockdown hasn’t been fully lifted.

I don’t want to hurt anybody, so please appologise me but the world is widly open for anybody in anything mainly information, so why not? The same Queen is responsible for Australia.
The States began to state their rules very very late. That’s the case. Nearly only Brazil and India later.

Brazil and India more and some other countries to according their population and the stats what’s mean infected.
The States stepped much later than they had to.
Australia nearly promptly. That’s and the above mentioned are the difference nothing else.

#distanceswimmershavefeelingstoo go easy on us 🙁

Aside from pool time, I could imagine that the pandemic affected the pro-level veterans quite a bit psychologically. I think Elizabeth Beisel mentioned this during her commenting on the 800, while watching Grothe’s heat. She said that she had no idea what Zane’s plans had been for post-2020, but that IF he was planning to retire after 2020, then keeping the intensity going (especially for distance training) for another year would have been hard to do. That made sense to me. Zane’s 29, and distance events are hard to sustain as you get older.

C’mon the whole Australia was closed for months. Victoria, Melbourne was closed about three or four times, now from there (Melbourne) they can leave there homes for 20 kms or so, big deal, Melbourne is much much wider then 20 kms. Look at a map e.g. from centre (or center dono what you use) to StKilda and it’s very far from the end, you can walk to Phillip Island from Great Ocean Road. Try it. Much much longer than from Battery Park to Flushing. Sydney is about 180 km wide. Sorry, I really don’t know what are you speakin about or it is only an alibi.

So Lochte scratches the 200 back, right? There’s no way he could think swimming an event he’s seeded 12th in an hour before his most important race is a good idea, right?

He’s just not in good enough shape either way. Proud of him for trying but he just doesn’t have “it” anymore

Thinking about the number of “just misses” Georgia swimmers have had 🙁
Fink, Margalis, Smoliga, Urlando all 3rd place finishers

I think we got Fink in the 2BR tonight though.

If Ervin makes this team, I’m absolutely going to lose my s***. It would be, by far, the highlight of this meet, better than Mitchell’s TT.

Who knows with that guy. I feel like he has some kind of spiritual intervention each time he races at the trials.