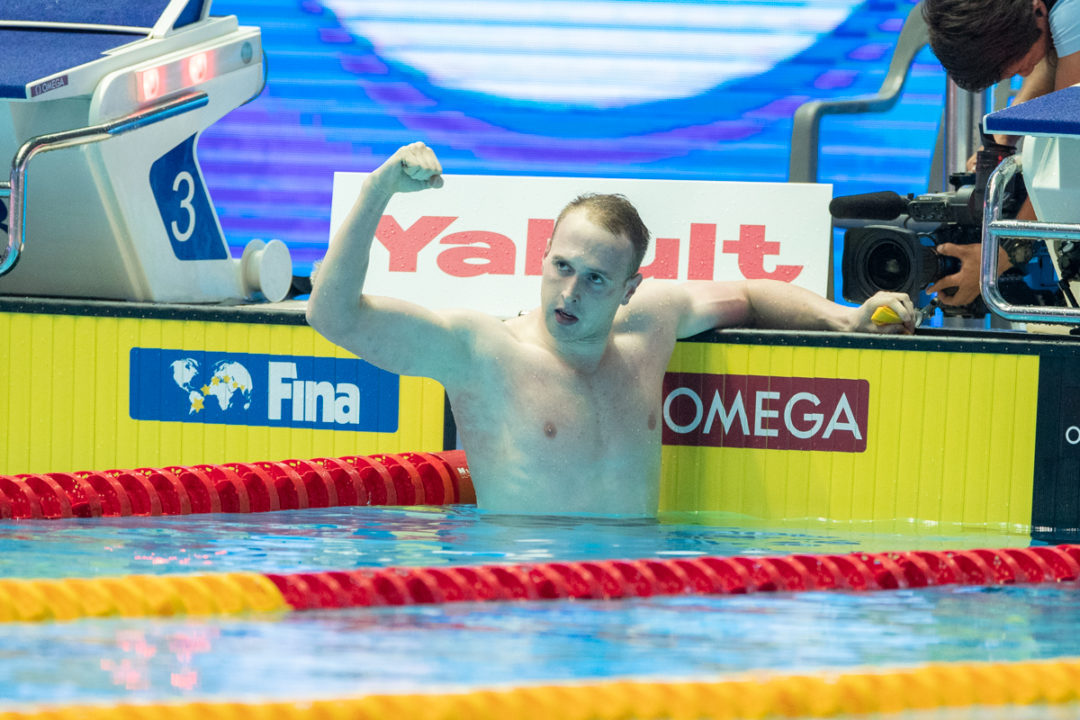 The 2021 Swimming Australia Olympic Trials are done and dusted with a roster of 35 men and women ultimately being named from what transpired in Adelaide. The week-long affair provided electrifying performances, with Kaylee McKeown breaking the World Record in the women’s 100m back, as well as Commonwealth Records being set by Emma McKeon in the 200m back, Ariarne Titmus in the 200m/400m freestyle and Zac Stubblety-Cook in the men’s 200m breast.

Kyle Chalmers took the 100m and 200m freestyle titles this week, meaning we’ll be seeing him dive in multiple times in Tokyo, including most likely against American Caeleb Dressel in a rematch of their World Championships 100m freestyle duel.

Also of note is that Matt Wilson, former World Record holder in the men’s 200m breaststroke, was nominated to the team under Swimming Australia’s ‘extenuating circumstances’ clause. The man who placed 2nd behind the aforementioned Stubblety-Cook but missed the 2breast qualification time was grieving a death in the family recently which Swimming Australia said disrupted Wilson’s Trial performance and preparation.

Short course World Record holder Minna Atherton will not be going to Tokyo after missing out on qualification opportunities in her events. This is significant, as the 21-year-old has medaled on the world stage before, having captured silver in the women’s 100m back in Gwangju at the 2019 FINA World Championships.

Finally, in terms of Aussie medalists from Rio that will not repeat their podium performances, Maddie Groves dropped out of the Trials and will not be repeating her 200m fly silver from 2016. Additionally, Mack Horton missed individual qualification in the 400m free, meaning we will have a new gold medalist next month in Tokyo.

Relay medalists from Rio James Roberts, Jake Packard and Taylor McKeown will also be on the sidelines this time around.

Australian Olympic Team Chef de Mission Ian Chesterman said of the Aussie roster, “Tonight’s selection caps a special week in the pool, with exceptional achievements from our athletes. Swimming has such an incredible Olympic history for our country and this Team is ready to build on that legacy with their own inspiring performances in Tokyo.

“Congratulations to all of the athletes, the coaches, support staff, friends and family who have been there every step of the way to help them realise their Olympic dream.”

“I want to highlight Cate Campbell and Emily Seebohm in particular – achieving a feat of four Olympic Games, only reached by one Australian swimmer in history, is testament to their persistence, character and talent and I am thrilled to have such fantastic ambassadors on the Australian Olympic Team for Tokyo.

Swimming Australia Head Coach Rohan Taylor stated, “I’ve been really pleased with the performances this week. It’s so great to be able to get back to quality racing at a meet like this and see our team perform so well. I feel we have a strong team, and I’m particularly pleased with the strength of our relays, it shows the fantastic depth in this squad.

“Getting selected onto the Olympic Games is a real team effort. These athletes have great support behind them, congratulations and thank you to the coaches, support staff and supporters who have helped make this happen.

“We have a big five weeks ahead of us. Now it’s about preparing our athletes for what they’ll experience and get them ready to perform on the biggest stage in the world in Tokyo.”

Matthew Wilson should never have been at the mercy of the officials. If you finish first or second in a time under the FINA ‘A’ cut your place in the team should be guaranteed. Imposing arbitrary selection times with discretion given to the officials always ends up messy and controversial. Now there are swimmers who didn’t get the benefit of discretion who will justifiably feel they were robbed.

The team announcement ceremony on Amazon Prime was very moving. As even the announcers said, filled with emotion, hardly a dry eye in the house. The entire event was very bonding for the team. Prime basically crushed it with their coverage – very respectful of athletes, their families (so much in the way of showing the support the families give). And where else will you see or hear of the announcer giving the qualifier a hug at the end of the interview (Giann Rooney hugging Wilson)? NBC could take a lesson or ten. Also love the inclusiveness of the Paralympians as well. Ahmed Kelly & Scooter Patterson are a total trip, great fun to watch them qualify again.

Meanwhile NBC don’t show the most electric time trial in history and then don’t even have the decency to post the whole race days later!

Ought to have taken Dekkers. Happy for those that have been given the benefit of the doubt but feel that some of the other discretionary picks are a bit harder to justify for me.

Women’s 200 fly is wide open – times are comparatively slow and the depth is shallow. It’s just the type of event where a 17 year old should be picked.

She missed the FINA A cut. So many here backing Dekkers but actually there were others with a stronger claim as they made the FINA A cut and got second (short, Hartwell).

Hartwell and Short were unlucky too.

I’m pretty sure though that Dekkers has the highest world ranking of those not going. I’s guess she’s ranked quite a lot higher than some of those that are going (due to the imperfections of the FINA A standard). If you’re happy to waive the rules for some, I would have thought your world ranking would be all that really matters if you’re trying to pick the best team.

She also has arguably the biggest scope for improvement although that’s admittedly more of a hunch.

Swim aus absolutely corrupt. Wilson didn’t make the team in the 200 and came 4th in the 100 so if it was anyone else they would be left at home. Gotta feel for dan cave coming second in the 100, where every other 2nd place swimmer in stroke 100s went yet he gets left home for the guy that comes 4th

whats wrong here are the ridiculous QTs set by swimming australia. wilson is proven internationally, unlike cave. this circumstance is simply not applicable to the results of the other stroke 100s.

And yet Issac Cooper goes who is in the exact same situation as cave with both missing the QTs and coming second. I see why they chose Wilson but you cannot ignore how unfair it is to cave to choose someone who, if it was anyone else not called Matt Wilson, wouldn’t be picked

name anyone in the backstroke field who finished behind cooper (or anyone from the 200 field for that matter) who is anywhere near as proven as wilson.

but whatever. people said the same thing about mack horton getting a free ride into gwangju, and we all know how that turned out.

At least Mack made the 4×200 relay for 2019 and then since only 1 person qualified for the 400 he was able to swim. Same as this year except 2 people made it so he can’t swim the 400 this time around. In 2016 Wilson came 3rd in the 100 by 0.02 and then won the 200 just missing the QT and didn’t get taken as they chose 2nd place in the hundred. Here Wilson is 4th and by a much bigger margin than 0.02 and got 2nd in the 200 missing the time again. Just going off swim aus previous actions cave should of been taken over Wilson even if he is more proven

I don’t believe anyone should be selected because they have a “proven” record. It should be based on what you do at the designated meet. Wilson deserved his spot on the strength of his 2.08. End of story.

Cave didn’t get the FINA A cut, so can’t be picked anyway.

Wilson has the FINA A cut in both 100 and 200 breast. And they wouldn’t want to go with only one breaststroker.

Cooper hit the FINA A cut, allowing him to be selected for the individual and swim the backstroke leg for relay if needed.

Gutted for Dekkers who has done the FINA A cut 🙁

With FINA B times (which is what Cave has at 100), their acceptance to swim in Tokyo (even if nominated) is in the hands of FINA rather than Swim AUS as its a case of where his/their nominated time sits amongst all the FINA B nominees.

Given swimming aus only ‘accepts’ times from trials and not any other meet in the qualifying period it really shouldn’t matter how fast Wilson has been as it all comes down to getting it done at trials. I’m extremely happy to see him get taken but it shouldn’t of been at caves expense

it’s not at Cave’s expense.

Cave came 2nd in 100. No FINA A. Aus can’t nominate him for 100. Refer to commonwombat’s detailed facts.

My understanding is that a FINA ‘B’ time gets you to the Olympics if you are your country’s only representative.

C’mon Wilson is the former WR holder, had a death in his family before the trials , but still throws a decent 2.08 wayyy ahead of fina A standard. He missed the 2 QT in 2016 and 2020 by less than 0.5 seconds , he is deserving his place on the team

He is definitely deserving, however it shouldn’t matter what his previous accomplishments are, he didn’t get the job done at trials and they chose him over cave which is just politics. What’s the point of having trials if it doesn’t really matter if you qualify there if they’ll take you anyway

You’re forgetting the “extenuating circumstances “ reason behind his selection .. which is over and above any Fina a and fina b arguments anyone can throw in if that’s enforced

I don’t think there is a single person on this planet that wouldn’t be happy to hear this! So thrilled for him!

This is the greatest news I’ve ever seen this week